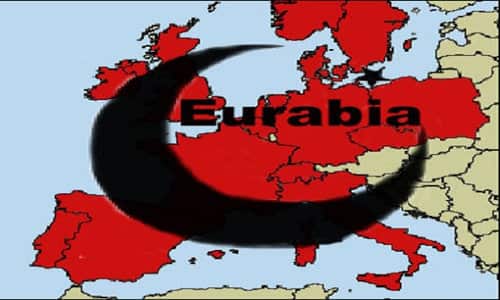 By Giulio Meotti/Gatestone Institute April 12, 2018
Share this article:
In a prophetic conference held in Vienna on May 7, 1935, the philosopher Edmund Husserl said, "The greatest danger to Europe is tiredness". Eighty years later, the same fatigue and passivity still dominate Western European societies.
It is the sort of exhaustion that we see in Europeans' falling birth rates, the mushrooming public debt, chaos in the streets, and Europe's refusal to invest resources in its security and military might.

Last month, in a Paris suburb, the Basilica of Saint Denis, where France's Christian kings are buried, was occupied by 80 migrants and pro-illegal-immigration activists. The police had to intervene to free the site.
Stephen Bullivant, a professor of theology and the sociology of religion at St Mary's University in London, recently published a report, "Europe's Young Adults and Religion":
"Christianity as a default, as a norm, is gone, and probably gone for good - or at least for the next 100 years," Bullivant said.
According to Bullivant, many young Europeans "will have been baptised and then never darken the door of a church again. Cultural religious identities just aren't being passed on from parents to children. It just washes straight off them... "And we know the Muslim birthrate is higher than the general population, and they have much higher [religious] retention rates."
Richard Dawkins, an atheist and the author of The God Delusion, responded to the study's release by tweeting to his millions of Twitter followers:
Before we rejoice at the death throes of the relatively benign Christian religion, let's not forget Hilaire Belloc's menacing rhyme:
"Always keep a-hold of nurse
For fear of finding something worse."
Dawkins is apparently concerned that that after the demise of Christianity in Europe, there will not be an atheistic utopia, but a rising Islam.
That is the major point of what Philippe Bénéton in his book The Moral Disorder of the West ("Le dérèglement moral de l'Occident"): Islam is filling the cultural vacuum of a society with no children and which believes -- wrongly -- it has no enemies.
According to Radio Sweden, fewer newborns in that country are being baptized due to the demographic shift. By 2050, almost one in three people in Sweden will be Muslim, according to a recent Pew report
The European mainstream mindset now seems to believe that "evil" comes only from our own sins: racism, sexism, elitism, xenophobia, homophobia, the guilt of the heterosexual white Western male --and never from non-European cultures.

So Europe now postulates an infinite idealization of the "other", above all the migrant. The heritage and legacy of Western civilization gets sectioned off piece by piece so that nothing remains; our values are mocked and our survival instinct is inhibited. It is a process of decomposition that Europe's political authorities seem to have decided to mediate, as if it were inevitable.
In German Chancellor Angela Merkel's major speech in the Bundestag after the unprecedentedly long and difficult process of forming a new government, she struck a conciliatory tone on immigration while offering an inclusive message on Islam. "With 4.5 million Muslims living with us, their religion, Islam, has also become a part of Germany", she said.
** Sponsored Link **
The best marvel gadgets can be expensive but Gadget Nerds has several on sale as well as reviews on similar products. **
The most powerful politician in Europe capitulated: she evidently forgot (again) the difference between the civil rights of individuals, which Muslim citizens enjoy in Germany, and the sources of a national identity, on which Europe is based: humanistic, Judeo-Christian values.
This realization may why a week earlier the new German Interior minister, Horst Seehofer, said that "Germany has been shaped by Christianity" and not by Islam.
Europe's tiredness can also be seen in a generational conflict embodied in the alarming rise of public debt. In Italy, the political establishment was recently shaken up by the election of two major populist parties. It is a country with a public debt of 40,000 euros per capita, and a tax burden equal to 43.3% of GDP.

The average age of the population is the third oldest in the world, together with one of the lowest birthrates on the planet, one of the lowest retirement ages in Europe and the highest social security spending-to-GDP ratio in the Western world. It is also a country where pensions account for one-third of all public spending and where the percentage of pensioners in proportion to workers will rise from 37% today to 65% in 2040 (from three workers who support one pensioner to three workers who support two pensioners).
An Islamist challenge to this tired and decaying society could be a decisive one. Only Europe's Christian population is barren and aging. The Muslim population is fertile and young. "In most European countries--including England, Germany, Italy and Russia, Christian deaths outnumbered Christian births from 2010 to 2015," writes the Wall Street Journal.
Terrorist attacks will continue in Europe. Recently, in Trèbes, southern France, a jihadist took hostages in a supermarket and claimed allegiance to ISIS. It seems that Europe's societies consider themselves so strong and their ability to absorb mass immigration so extensive, that nothing will prevent them from believing they can assimilate and manage terrorist acts as they have automobile fatalities or natural disasters.
A tiredness also seems to be why these countries do not take meaningful measures to defeat jihadism, such as closing Salafist mosques or expelling radical imams.
Muslim extremists understand this advantage: so long as they avoid another enormous massacre like 9/11, they will be able to continue murdering people and undermining the West without awakening it from its inertia.
The most likely scenario is that everything will continue: the internal fracture of Europe, two parallel societies and the debasement of Western culture. Piece by piece, European society seems to be coming irreparably apart.
Originally published at Gatestone Institute - reposted with permission.