A New Bible Celebrating Israel's Role In The Fulfillment Of Prophecy 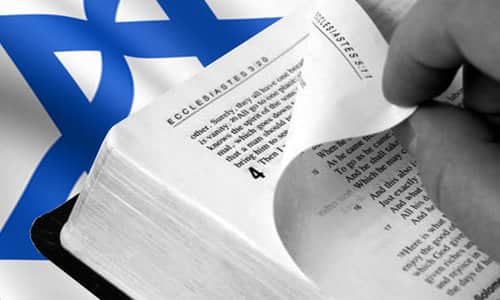 By Rabbi Tuly Weisz April 19, 2018
Share this article:
This week the State of Israel will be celebrating its 70th anniversary.
The story of the modern State of Israel that has unfolded over seven decades is full of miracles of biblical proportions and is the literal fulfillment of prophecy.
It is the story of a people scattered across the four corners of the world, who survived the worst form of genocide in human history, only to emerge from the grave and achieve a level of blessing and prosperity unmatched in the modern era.

What is even more wondrous, is that all of the incredible achievements that the Jewish people have accomplished in recent years in Israel where all promised in the Bible long ago.
"The Israel Bible" is a brand new 2,200-page Bible that highlights the role of Israel in the fulfillment of Biblical prophecy. Published by Israel365 and Jerusalem's Menorah Books, "The Israel Bible" was produced by a team of Bible scholars based on Jewish teachings and wisdom from the Hebrew language.
It has a unique English translation along with an original commentary, maps and illustrations and is now available for sale from Israel365 for only $59.
Here is an excerpt from "The Israel Bible" containing four of the most incredible Biblical miracles that have taken place over the past 70 years in the State of Israel:
1) The Ingathering of the Jewish Exiles from the Four Corners
Ezekiel 34:13: " And I will bring them out from the peoples and gather them"
The Ingathering of the Exiles, known in Hebrew as kibbutz galuyot, , is promised throughout the Bible. Although scattered throughout the four corners of the earth, Ezekiel describes that one day, God will gather the Jewish people and return them to their ancient soil, the Land of Israel.
For centuries, Jews have been praying three times per day for the fulfillment of this prophecy in their central prayer, known as the Amidah. With the establishment of the State of Israel and the many waves of immigration that have taken place, we are fortunate to witness the beginning of the fulfillment of this tremendous miracle.

2) The Revitalization of the Hebrew Language
Nehemiah 13:24: "They did not know how to speak Judean"
Nehemiah bemoans the fact that in 70 years of exile, the Jews of his generation forgot how to speak Hebrew. The situation was even worse in the modern era after 2,500 years of exile, when Hebrew was nearly extinct, reserved exclusively as the Jewish holy language for prayer and study.
This all changed with the advent of the Zionist revival, thanks in large parts to the efforts of one man, Eliezer Ben Yehuda (1858-1922), who decided that "in order to have our own land and political life it is also necessary that we have our own language to hold us together." Many scoffed at Ben Yehuda's vision, but today, Hebrew has been revived from the dustbins of history and is the official language of the State of Israel.
Millions of Israeli Jews converse in Hebrew, conduct their affairs in Hebrew and can read the Bible in their original mother tongue. In the words of his biographer, "Before Ben Yehuda, people could speak Hebrew; after him, they did."
3) Rebirth of the Physical Land of Israel
Isaiah 51:3: "He hath comforted all her waste places, and hath made her wilderness like Eden"
The Land of Israel has a supernatural quality to it. While under foreign occupation, it resembles an arid desert. However, under Jewish sovereignty, it comes to life, flourishes, and yields great produce. Indeed, for nearly two millennia, as the land switched hands numerous times between various foreign powers, including the Romans, the Muslims and the Turks, the land lay utterly desolate.

Amazingly, the modern rebirth of the Jewish state in 1948 has brought with it an astounding development of the land, to the point where once again the Jewish people can claim a flourishing country all their own. In agriculture, technology, and culture, Israel ranks among the most advanced countries of the world. Indeed, we are witnessing the Lord comfort "all her waste places."
4) Spiritual Partnership Between Jews and Christians
Ezra 6:14: "And according to the decree of Koresh, and Daryavesh, and Artachshasta king of Paras"
The fate of the Jewish people's autonomy has often been subject to the blessings or restraints of foreigners. Cyrus' edict to allow the Jews to return to the Land of Israel and rebuild the Temple was a ray of hope in a time of bleakness. Persian approval of Jewish authority constituted a remarkable turning of the tide for the Jews in the exile.
Though construction was temporarily halted, Darius allows for the construction of the Temple to continue, and it is completed in his sixth year.  The British Government's 1917 Balfour Declaration possessed similar promising echoes when it declared: "His Majesty's government view with favour the establishment in Palestine of a national home for the Jewish people, and will use their best endeavours to facilitate the achievement of this object."
In both cases, it was non-Jews serving as God's agents who facilitated the return of the Jewish people to their land.
These are just four examples out of many others explaining how the State of Israel represents the fulfillment of Bible prophecy, as described in "The Israel Bible." The new book is now available for sale from Israel365 for only $59.
Rabbi Naphtali "Tuly" Weisz is the founder and CEO of Israel365 and editor of The Israel Bible.