Will California Go From Banning Religious Books To Burning Them? 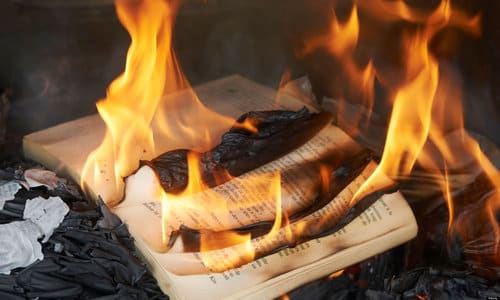 By Michael Brown/Ask Dr Brown April 23, 2018
Share this article:
Two weeks ago, we warned you about the implications of California's "Must Stay Gay Bill". Now others are sounding the alarm about the full weight of this onerous bill, which could literally mean the banning of certain religious books. If we don't stop this, what's coming next?
On April 17, David French noted that this bill "would actually -- among other things -- ban the sale of books expressing orthodox Christian beliefs about sexual morality.

"Yes, ban the sale of books.
"Assembly Bill 2943 would make it an 'unlawful business practice' to engage in 'a transaction intended to result or that results in the sale or lease of goods or services to any consumer' that advertise, offer to engage in, or do engage in 'sexual orientation change efforts with an individual.'"
In other words, it would be illegal for a bookstore to sell my book, Can You Be Gay and Christian?  And that would apply all the more if the book was sold to someone with unwanted same-sex attraction. Yes, it would be illegal. Against the law. Punishable by the law.
With no hyperbole (really, with some understatement), French wrote: "This is extraordinarily radical."
You say, "But no one in their right mind would consider voting for such a bill. That's totally insane."
Well, think again.
An April 19 headline on the California Policy Council website announced, "Assembly votes to violate the 1st Amendment."
Yes, "AB 2943 bans books, conferences, counseling advocating Muslim, Jewish, and Christian views on gender and sexual orientation."
As the story explains, "The California Assembly approved a bill today 50-18 that tells churches and others with traditional beliefs about gender and sexual orientation that advocating for their views could get them sued. AB 2943, declares 'advertising, offering to engage in, or engaging in sexual orientation change efforts with an individual' is illegal under state's consumer fraud law."
And note the carefully the vote in the Assembly: 50 to 18 in favor of the bill. Talk about insane!

As many have made clear in the weeks leading up to this vote, the bill is wide-ranging in its scope and intention, which is why I dubbed it the "Must Stay Gay Bill." (It could also rightly be called the "Must Stay Gender Confused" bill, but that is not as pithy as description. Either way, the bill is a nightmare.)
To be totally candid, part of me wants to say to California and the nation, "Go ahead. Pass your radical bills. Outlaw our most fundamental freedoms. Consign struggling people to their struggles. Muzzle our religious rights. Go ahead and do your thing, and we'll watch the whole country crumble."
Perhaps then the church (and other people of conscience) will wake up. Perhaps then they'll understand why we've been warning for years that those who came out of the closet want to put us in the closet. Perhaps then they'll see the utter intolerance of the radical left.
But at what cost? At what price to our kids and grandkids? At what expense to the very fabric of our country? Some things leave irreparable damage in their wake.
So, while one part of me says, "Go ahead and ignore our warnings," another part of me says, "Don't let it come to that! It's not too late to stand and act. It's not to late to debunk the myth that homosexuality is innate and immutable. It's not to late to expose the lies that there is no such thing as ex-gay (or ex-trans). It's not too late to get the truth out to the world."
Yes, it's not too late - but it is getting later by the second. The window is closing rapidly.
Of course, I already hear the mockers who say, "You're a nutcase! You're a religious fanatic! No one is going to burn your silly books!"
I remind these mockers of four things.

First, these same mockers once said to me, "No one wants to put you in the closet." A few years later, they changed their mantra to, "Bigots like you belong in the closet!"
Second, these same mockers rejoiced when Kim Davis was put in jail, saying she got what she deserved.
Third, these same mockers have likened Christian conservatives to ISIS and the Taliban and Al-Qaeda and the Nazis, holding signs saying that we should be thrown to the lions.
Fourth, and most tellingly, these same mockers think this new California bill is a great thing.
California and the nation, it's time to wake up! You ignore this bill at your own peril.
Originally published at AskDrBrown.org - reposted with permission.