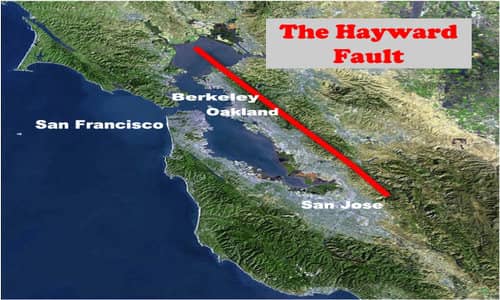 By Mac Slavo/SHTFplan.com April 24, 2018
Share this article:
Scientists are now saying that the "Big One" in California may not be caused by the San Andreas fault line, but by the Hayward Bay fault line. It is now thought to be the "ticking time bomb" fault line and more dangerous than the San Andres.
The scariest scenario for the next major earthquake may not be from the San Andreas Fault (though that one still threatens), but from the Hayward Fault that runs along the east side of the San Francisco Bay.

In fact, many say that the next earthquake on the Hayward Bay fault line would be "disastrous."
According to KTUV, a magnitude 7.0 earthquake along the Hayward Fault could kill as many as 800 people and injure 18,000, according to results of a new research released Wednesday.
The U.S. Geological Survey, citing findings from a simulated tremor with an epicenter in Oakland, said the disaster would cause 400 fires that could destroy 50,000 homes. Nearly half a million people would be displaced, authorities said.
The simulated quake in the video above, known as the "HayWired scenario," was modeled to occur at 4:18 p.m. on April 18. It replicates a rupture along the fault's entire 52-mile length, from San Pablo Bay in the north to just east of San Jose in the south.
According to this model, the violent shaking from the earthquake could cause the two sides of the fault to split six feet apart in some places. Some of the aftershocks would continue for several months as well.
Cities in the East Bay would be hit hard, including Berkeley, Oakland, San Leandro, and Hayward.
If a 7.0 magnitude quake occurred like the one simulated, researchers say that the East Bay residents could be without water from anywhere between six weeks to six months. Electricity could be out for up to four weeks in some locations.

According to Business Insider, the statistical chances of this type of an earthquake occurring are not very comforting either. There's about a 76% chance that the San Francisco Bay Area could experience a 7.2 magnitude earthquake within the next 30 years, according to some recent reports.
The San Andreas Fault under San Francisco rumbled apart about 112 years ago, causing the devastating 1906 earthquake that swallowed city blocks, broke water mains, and triggered massive fires that burned for days.
However, the threat of another major quake for the Bay Area is "real and could happen at any time," according to researchers for the US Geological Survey.
The Hayward Fault is a "tectonic time bomb, due any time for another magnitude 6.8 to 7.0 earthquake," according to a 2008 USGS report. Since then, research has indicated that the likelihood of a Hayward quake is greater and more threatening to the 7 million Bay Area residents than a San Andreas quake would be.
"It's just waiting to go off," USGS earthquake geologist emeritus David Schwartz warned when speaking to the Los Angeles Times.
Learn more about the Biblical significance of Earthquakes & the end times including some shocking data on the increase in earthquakes with our DVD - The Coming Convergence.
Originally published by SHTFplan.com - reposted with permission.