California To Ban Books? AB 2943 An Assault On The First Amendment 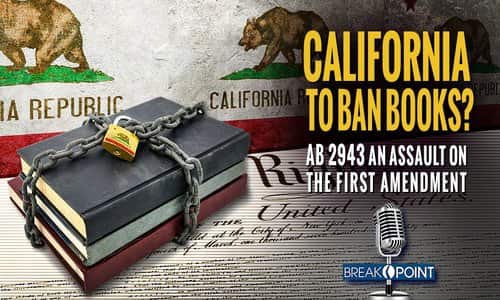 By John Stonestreet/Breakpoint.org April 25, 2018
Share this article:
Once again in California, we see that the new sexual orthodoxy trumps the Constitution.
All Americans should be alarmed, and I mean increasingly so, about the California Assembly's increasing disregard for the First Amendment.

After all, it's the California Assembly that attempted to require pro-life pregnancy centers to advertise the state's "free or low-cost" abortion services, the subject of a recent Supreme Court oral argument.
Even liberal Justice Sotomayor called that law "burdensome and wrong."
But now, the California Assembly has voted to add what it calls "conversion therapy" to the list of "deceptive business practices" prohibited by state law. California already banned "conversion therapy," at least for minors, in 2012.
This new bill, AB 2943, not only extends that ban to adults, it also makes the sale of all goods and services involving "sexual orientation change efforts" an "unlawful business practice."
Thus, according to this bill, you can talk to a psychotherapist about your same-sex attraction as long as the goal is "acceptance, support, and understanding" and avoiding "unlawful conduct or unsafe sexual practices."
But if the goal is to somehow to alter or even rein in those attractions or associated behaviors, it's against the law.

Now by itself, this level of state interference with patient-doctor relationships raises significant constitutional issues. It's forgotten that an important part of the rationale behind Roe v. Wade was that the right to privacy included doctors and patients being able to decide on a course of treatment without undue government interference.
But what makes matters worse is that AB 2943 is so broadly and vaguely worded. It's hard to predict where this thing will reach. Words like "goods," "acceptance," "support" and "understanding" are the legal equivalent of minefields waiting to blow up.
For example, if a psychotherapist doesn't try to change a person's sexual orientation or gender identity but is, in the patients' eyes, insufficiently accepting, supportive, and understanding, has he run afoul of AB 2943?
And what constitutes a "good?" Does an academic field of study count as a "good" or "service?" The implications for Christian colleges and universities are dire. Will a Summit Ministries conference, which teaches students they don't need to act on same-sex attraction or gender dysphoria, be illegal in California?
What about books, particularly those that endorse historic Christian teaching on sexuality and marriage, like my book with Sean McDowell? Would it be banned under this law?
It's absurd that under AB 2943, a California bookstore could sell "Mein Kampf" without legal repercussion, but not a book on changing, or even curbing the acting upon, sexual orientation. Nor is it clear which books would run afoul of AB 2943.
There's no spelled-out difference between a "how to" manual for conversion therapy and a legal and cultural analysis of the issues, like, for example, "When Harry Became Sally" by Ryan Anderson.

The bottom line is that AB 2943 is a textbook example of viewpoint discrimination.
David French of National Review is right when he calls the bill "extraordinarily radical." It should alarm us all that the obvious constitutional problems weren't obvious to the sponsors and supporting legislators.
The California Senate will now take up the bill. If you live in California, you need to let your senator know that stifling free speech under the guise of consumer protection is beyond unacceptable.
If you don't live in California but have friends and relatives who do, send them this commentary and urge them to contact their state senator.
And for all of us: We need to pray that they will find wisdom and courage to do the right thing.
Originally published at Breakpoint.org - reposted with permission.