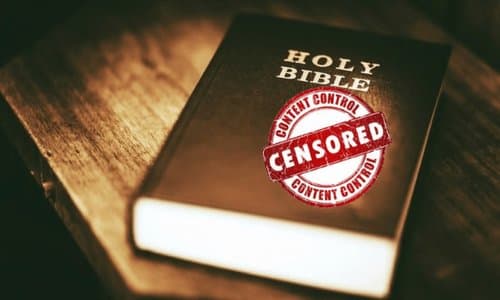 By Jonathon Van Maren/The Bridgehead May 03, 2018
Share this article:
If you had asked any Canadian conservative five years ago if Alberta would be the main battleground in the war over the rights of Christians to pass their values and their beliefs on to their children, they would have laughed. And yet, here we are.
The Alberta NDP wants to transform the Albertan school system before their time in power runs out, and Education Minister David Eggen bears an enormous animus towards Christians schools, which he will exercise to the full extent of his power until he gets the boot. And now this, from the National Post:

An Alberta Christian school that clashed with its school division over teaching certain Bible verses may be forced to shut down. The Battle River School Division voted last week to close Cornerstone Christian Academy in Kingman, Alta., southeast of Edmonton at the end of the school year.
The relationship started to fray about a year ago when the school division asked the school to stop teaching certain Bible verses that discussed sexuality. School division trustees said that they believed the verses could contravene Alberta's human rights code.
Just to be clear here: A school board believes, and stated openly, that passages of the Bible could be in violation of Alberta's human rights code. Their response to this, of course, was to ask that those passages no longer be mentioned, rather than considering the fact that there could be some overreach on the part of those drafting or interpreting that human rights code.
Christians have been warning that this could happen for some time, and those warnings were always scoffed off as paranoia.
Now that we're here, of course, those same scoffers will instead be full of righteous indignation at the idea that anyone would even consider taking such a homophobic book seriously in the first place--or suggest that, like former broadcaster Michael Coren, Christians consider eliminating or reinterpreting those passages of Scripture that certain groups might find offensive.
The board, of course, claims that all fault lies with the Christian school:
School board chairman Kendall Severson said that was eventually dealt with, but the bigger issue was a lack of co-operation. The school argues the division's attempts at censoring biblical references in the curriculum are illegal and wants the courts to stop the closure.
"I guess it was the unwillingness to work together for a communications protocol on how we communicate with each other and dealing with issues that arise," Severson said, pointing to an ongoing legal challenge brought against the division by the Cornerstone Christian Academy Society.
"We can't work together with an organization that's got legal action against us, and not willing to come together and work on an agreement." Deanna Margel, the society board's chairwoman, said there is a "great misunderstanding" of what faith means in today's culture.
"What is happening at the school is a good opportunity for people to discuss their different ideas and talk about how we deal with those things," she said. "Anybody familiar with the Christian Bible will recognize that there are many, many, many passages of Scripture that are offensive to even those of us who follow Christ."

Whenever cases like this appear in the public square, there are always post-Christian Christians who are scurrying to remind everyone that they don't actually believe all that stuff--they're just here for the forgiveness parts (not that there's much that needs forgiveness, once all of the "offensive" passages have been carefully excised from Scripture.)
The reason for this, as I cover in my 2016 book The Culture War, is so that they can present themselves as the "real" Christians, the "compassionate" Christians, while tsk-tsking at those who still believe that the Bible is actually the Word of God.
And while they assure the public that the rights of Christians are not being violated because they are Christians and they do not feel as if any of their rights have been violated, parents are stuck trying to figure out how to get a traditional Christian education for their children:
Parents are already considering their options if the legal fight fails.
"Many different parents are doing many different things: some going to home schooling, some having to drive their kids 40 minutes to 45 minutes away," said Gabe Vorhees, who sends his four children to Cornerstone. "None of us really want to be part of this school division."
He said his family was happy with the division before it decided to close the school, but doesn't trust it anymore. Vorhees said he believes there's a lot of internal animosity. "We are people of faith and we're a community of faith and we choose to forgive, but we also have rights."

If things don't go their way in court, the school society's backup plan is to reopen as a private school in the fall. Margel acknowledged that would make for a busy summer for the school society, because that would involve a lot of paperwork under tight timelines.
Cornerstone teachers also have a choice to make. They are employees of the school division, so staying on at a revamped Cornerstone would mean giving up their jobs with the public school board.
These schools, it bears pointing out, were often built with the blood, sweat, and tears of immigrant families who could not afford the money but pinched their pennies anyways in order to ensure that their children could receive a Christian education.
My grandparents worked tirelessly to send their children to Christian schools that were often built in large part by volunteers--even though they were immigrants just starting out with no money to spare, Christian education was a priority for them.
We may have to sacrifice to get our children a Christian education, too--and this time around, it won't just be a financial sacrifice.
Originally published at TheBridgehead - reposted with permission.