No Place To Hide - Facial Recognition Technology Will End Your Privacy 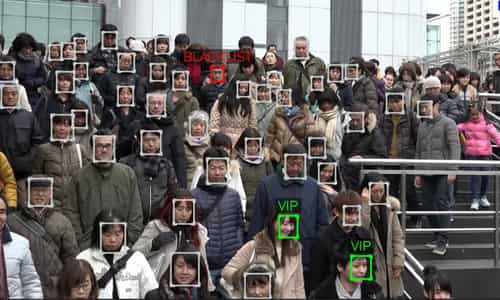 By PNW Staff May 10, 2018
Share this article:
The Chinese police in Nanchang made news in mid April when the press reported the arrest at a concert of a man wanted for fraud. The story was significant because automatic facial recognition systems, linked through now 176 million cameras across the country (rising to 600 million by 2020), had picked the man out of a crowd of 60,000 concertgoers and allowed the police to pinpoint his location in real time.
The episode was promoted by the Chinese government as proof positive of the benefits of the Chinese surveillance state, but the notion that an authoritarian government uses automatic facial recognition to track its citizens everywhere has sent shivers down the spine of anyone concerned about privacy and who may not have full faith in the benevolence of the Chinese government.

Facial recognition holds the promise of an incredible leap forward in law enforcement but backwards in individual rights. No longer will oppressive governments need to employ human watchers to monitor video footage.
Now highly accurate computer algorithms, monitoring tens or even hundreds of millions of video feeds, match patterns of facial geometry to identify individuals, even if beards or makeup are used. A criminal suspect shows his face on a public street, at a shopping mall, in a bank or at a bus stop and an alert can immediately go out to summon police for arrest.
Tellingly, the same system can be used against terrorists, political dissidents, union leaders, human rights protestors, members of the press, the poor, or ethnic minorities. As Paul Harvey used to say, you can run, but you can't hide.
Though China has made the hardest push for ubiquitous surveillance through its vast network of cameras linked in real time to computer-based facial recognition, it is far from alone. The NYPD has been attempting to gain access to the state database of facial recognition information collected for driver's licenses.
The NYPD's Real Time Crime Center and Facial Identification Sections are not satisfied with using only the facial scans of those it has arrested but wants to link every driving adult to its camera-equipped system, the vast majority without ever having been arrested. Thousands of cameras now installed at NYC intersections, tunnels and public buildings are feeding data into automatic facial recognition systems similar to those in Communist China.
As a precursor to real-time facial recognition powered by machine algorithms, Georgetown University's Center on Privacy and Technology revealed in 2016 that 26 states are already sharing facial recognition data collected on driver's licenses and 16 of those also share with the FBI, meaning that roughly half of the adult population can already be identified through facial recognition, though only upon arrest at this point.

Proponents of automatic recognition systems linked to pervasive surveillance point to the ability to locate missing persons, help dementia patients, identify unconscious victims and catch dangerous felons. The drawbacks are much harder to swallow, however.
Protest movements such as Occupy Wall Street, the Tea Party Movement and Black Lives Matter, were all monitored by the FBI with thousands of faces being fed into federal databases, according to recently revealed information. Those attending vigils held for victims are also common targets for facial pattern collection, representing what amounts to a chilling crackdown on free speech.
With frightening similarity to Egyptian police who manually record protest marches so they can come, often in the night, to arrest dissidents for torture in secret prisons, the creation of a government database of known protestors and blacklists of Americans is unsettling to say the least.
The latest proposal to link such automatic systems to police body cams takes the concept even further because it makes every officer a walking eye of the surveillance state.
The recent leak of data on 87 million Facebook users is another cause for concern because Facebook, as its name implies, is currently the world's largest facial portrait database and the profile photos cannot be made private, according to company policies.
Facebook itself ran afoul of European privacy laws in 2012 and was forced to suspend its activities after it used facial recognition automatically to tag and link photos, a dangerous proposition for those who want to stay hidden from abusive ex-spouses.

The system showed a 97% accuracy in testing, superior at the time to even the FBI's modest 85% accuracy several years prior. Now it is reported to be ready to restart its facial recognition program for all users.
Even more worrying, there is strong evidence to indicate that private intelligence companies have already compiled this vast trove of 2.2 billion photos for facial recognition purposes, to be sold to governments and corporations alike.
Forbes magazine reported this year on a company called Terrogence, started by an ex-Mossad intelligence officer. For the last five years, Terrogence has specialized in the construction of huge face-scan databases, compiling the data from social networks, Youtube videos, Internet forums, blogs, official records, news articles and a host of other sources.
Terrogence has been selling cutting-edge intelligence technology and information to the NSA. So, what the government doesn't collect legally through driver's licenses and arrest data, it quietly purchases from private intelligence corporations.
Marketed as an effort to stop terrorism by tracking down jihadists solely by their faces, LinkedIn profiles and leaks from former employees, their involvement in politics appears to go much deeper, with one employee describing her job as "open source intelligence practices and social media engineering methods to investigate political and social groups."
The company quietly boasts of infiltrating political groups with fake online personas in an effort to gather intelligence and create dossiers on possible subversives, all for profit and free from even the loose legal tethers of the US deep state.
The American no-fly list is a famous example of a black list that, although a sensible project that started with good intentions, quickly spun out of control until it was banning toddlers with similar names. There was no way for an individual to know if they were on it, how they got there or if there was a way to get off such a black list.
The same threat to personal liberty now exists with privatized "black lists" created from these corporate databases and, in addition to being denied access to flights, the consequences could be high-risk police stops, pervasive monitoring and restrictions on normal activities, all based on automatic facial recognition.
Communist China has made no efforts to hide what will soon be a total-information surveillance state, but the United States is quietly building out the same level of control through private contractors and a patchwork connection of corporate and government data.
The reality is that all our unique facial signatures are likely already in a database, whether government or corporate, and those databases are being linked, slowly at first, to automatic facial recognition systems through cameras popping up around major cities.
There will soon be nowhere to hide. Comparisons to Orwell's 1984 have become cliché by now, but what else can really be said except that Orwell never dreamed it would go this far.