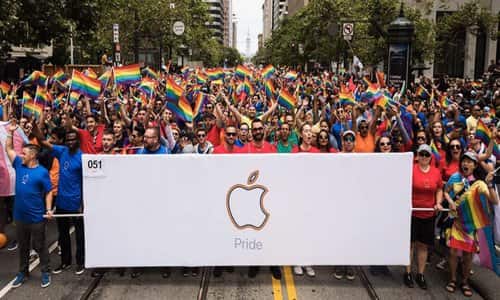 By Jonathon Van Maren/The Bridgehead May 21, 2018
Share this article:
After gay marriage was legalized in the US, one prominent LGBT activist was asked what the next step for the movement was. His answer was succinct: "Punish the wicked." By the "wicked," of course, he meant anyone who dissented from the agenda of the LGBT movement--and that included entire states.
North Carolina, for example, has been under fire since it passed legislation protecting religious liberty--and gay activists are determined that the state being made to economically suffer until they have been sufficiently educated and willing to persecute those who disagree with them.

Here is the most recent example of their policy, from Axios:
LGBT activists are reacting with anger and dismay at the prospect that Apple might build its new corporate campus in North Carolina. The state is still being boycotted by a number of organizations and state governments for not fully repealing a law limiting the civil rights of LGBT people...Apple has been one of the strongest corporate allies of the LGBT political movement, and its potential decision is seen as opening the floodgates for others that want to set up shop in states with anti-LGBT laws.
After being elected on the promise to nullify a state law that severely limited the rights of LGBT people, North Carolina Gov. Roy Cooper accepted a compromise that kept in place a ban on cities passing their own protections for LGBT citizens. "North Carolina is one of the most hostile states in the country to LGBTQ people, with no credible path to progress in the near term ... Under these conditions, it's hard to imagine that any company would decide to take their operations and thousands of employees there."-- an LGBT activist speaking to Axios.
That state law, of course, did nothing of the sort. It simply protected the conscience rights of those who hold to the traditional definition of marriage and do not believe in the latest gender fluidity fads.
The LGBT movement, of course, does not believe in the concept of religious liberty or conscience protections, and thus respond to any legislation protecting those who disagree with their ideological agenda with disgusting comparisons to proponents of segregation and other smears.

Some, of course, hope that economic pressure to roll back rights for Christians from the inside:
While many groups have been encouraging Amazon and Apple to shy away from North Carolina for their major expansions, some people have made the case that the companies could have a large impact by moving to a state without LGBT protections.
Among those in that camp is American Airlines CEO Doug Parker, whose company has strongly backed LGBT rights. "I think we're more impactful here than we would be anywhere else," Parker told The Washington Post. Speaking about Amazon, he suggested that company might also want to consider going to a place where LGBT rights aren't fully protected. "My personal view is if they care about making a difference, they should go where they can make a difference."
That's what we're up against: Multi-billion-dollar corporations that intend to use their economic power to force compliance with the LGBT agenda.

The Republican political alliance between big business and social conservatives has collapsed, but not all Republicans have realized it yet.
This puts Christians in a particularly dangerous position, as it means that at least some Republican state legislators can be relied on to buckle under pressure--as some in other states already have, backing down from solid religious liberty legislation.
The next decade is going to be a very dangerous one. The LGBT movement has recruited an enormous number of corporate heavy-weights, and they are determined to stomp out dissent.
Originally published at The Bridgehead - reposted with permission.