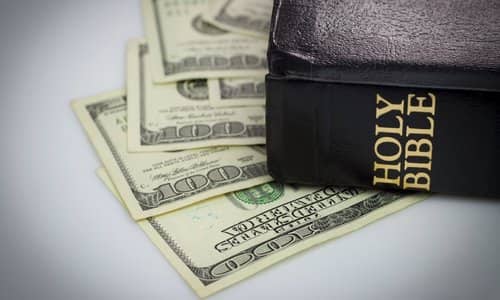 By Michael Brown/Ask Dr Brown June 12, 2018
Share this article:
As followers of Jesus, how should we react to the news that Jesse Duplantis claims that God told him to buy a $54 million jet for his ministry?
Should we condemn him for taking the prosperity message to its logical extreme?
Should we say, "That's between him and God?"
Or should we say, "How do I help the man of God travel in style? Where do I give?"

According to Duplantis, he wasn't asking his followers for money. Rather, he wanted to inform them so they could believe God with him for the jet. And, he said, "I'm not asking you to pay for my plane."
Regardless of why he made the initial announcement (I'll leave that between him and God), let's look at four unhealthy reactions to his announcement. Then, I'll suggest the real questions we need to ask.
The first unhealthy reaction is based on hyper-gullibility. "We dare not question the man of God. If he says God told him, then it must be so. We don't want to touch the anointed."
In my newest book, Playing with Holy Fire, I noted that gullibility was one of the hallmark weaknesses of the Pentecostal-Charismatic church. (I say this as insider, not an outsider.) It's the flip side of one of our hallmark strengths, which is faith. But it is a dangerous flip side.
God calls us to discernment, to mature faith. Everything must be tested by the Word of God.
If we believe whatever our leaders tell us, no matter how outlandish, we could end up in a Jim Jones-type personality cult. If we test things by the Word of God (and by other practical tools the Lord gives us), we will save ourselves a lot of trouble.
The second unhealthy reaction is based on hyper-criticism. Some Christian critics have already damned Duplantis to hell. To paraphrase, "This is proof he's a wolf in sheep's clothing! We always knew he was a deceiver."
Actually, unless we can show that he himself is not a true Christian leader - either by his doctrine or by his life - then this one announcement does not prove that he is a false teacher. Let his ministry (along with all of our ministries) be evaluated fairly, biblically, and comprehensively.
For critics to jump to sweeping conclusions about a leader based on this one announcement is no better than for charismatics to believe everything that leader says.
The third unhealthy reaction is based on hyper-prosperity. "God wants the best for His children," some say. "So, if you're going to get a private jet for your ministry, get the best. God is not a pauper!"

This appears to be a principle Paul and his colleagues failed to master. He wrote, "Up to the present hour we are both hungry and thirsty; we are poorly clothed, roughly treated, homeless; we labor, working with our own hands. When we are reviled, we bless; when we are persecuted, we endure it; when we are slandered, we respond graciously. Even now, we are like the world's garbage, like the dirt everyone scrapes off their sandals" (1 Cor. 4:11-13).
I address this hyper-prosperity mentality (along with the "superstar leaders" syndrome) in Playing with Holy Fire as well.
The fourth unhealthy reaction is based on hyper-poverty. By this I mean the attitude that the less you have, the holier you are.
This mindset does not produce generosity. It does not increase faith. And it does not advance the cause of the gospel.
I was speaking with a ministry colleague who heads up a massive evangelistic work. He mentioned a famous prosperity preacher to me and said, "This guy has probably given $50 million to our ministry over the years. He practices what he preaches."
In stark contrast, those who embrace a poverty mentality, who have a hard time receiving financial blessings from God, give very little to the work of the gospel. They feel guilty for every good thing they have, forgetting that Paul knew how to have a little as well as to have a lot (see Phil 4:12).
Because of their restrictive, guilt-ridden mindset, they are constantly in need, always looking to receive and rarely able to give. They are the polar opposite of hyper-prosperity.
That being said, the fact that a prosperity preacher gives away millions of dollars does not justify his message. It simply indicates that he preaches generosity and practices generosity.

On the flip side, the idea that we need to make life difficult for ministers of the gospel is absurd. Better to have a car that runs than a car that breaks down. Better to spend an extra $250 on a direct flight than to save the money and spend the night sleeping on the airport floor.
And that leads me to the two questions I have regarding Jesse Duplantis's announcement.
I don't know him personally and I only heard him preach in person one time, several decades ago. And I'm not here to present a critique (or defense) of his ministry.
I simply want to ask two questions.
First, is it good stewardship of his ministry funds to spend $54 million on a private jet, plus the millions of dollars it will cost every year to maintain and use it?
If a private jet is legitimately needed due to his travel schedule (God and his board know; I don't), does it have to be this expensive? As servants of the Lord, do we need to travel in such luxury?
It's true that God's funds are unlimited. But our own ministry funds are not.
Choices must me made, and by saving an unnecessary expense, we can free up funds for other gospel work (like providing full-time support for some Indian tribal pastors at $50 a month).
When I go overseas to speak, my assistant shops for the best business class fares available, or we use miles for upgrades.
At present, I've been overseas more than 160 times, sometimes with consecutive trips just days apart. Such travel is quite grueling, regardless of where on the plane you sit.
The first 50-60 trips, I virtually always flew economy. The last 100 or so, I've virtually always flown business, often at the expense of those inviting me.
But with the intensity of my schedule (which I wouldn't wish on others) and with my height, it's a good investment to make. Yet it would not be a good investment for us to own a private plane, even an old one.
The point is that every ministry and organization has to evaluate how to disperse the funds it receives. Stewardship is the key word here.
My second question is this: Does Jesse Duplantis's announcement bring reproach to the gospel? Does it make it more difficult for other Christian leaders to raise funds for their work? Does it play into the image of the self-serving, manipulative televangelist?
In the end, if God told Jesse to believe Him for a $54 million jet, and if the Lord gives him that jet in response to his faith, so be it.
My recommendation is that, in such cases, we follow Paul's guidelines set forth in Romans 14 (in a different context): "The faith you have, keep to yourself before God" (Rom. 14:22). There's no reason to announce it to the world.
Originally published at AskDrBrown.org - reposted with permission.