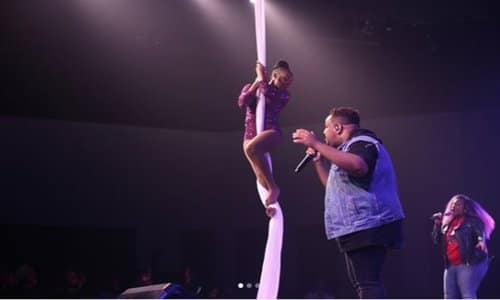 By PNW Staff July 19, 2018
Share this article:
Many modern churches are radically redesigning their 'auditoriums, formerly called sanctuaries.
The word 'sanctuary' means 'holy place' so, whether by design or default, the change makes sense. The holy presence of God has been replaced by an entertainment mindset.  Recently, I attended a missionary service in a denominational church, later to reflect on that experience as it is representative of many contemporary 'worship' services.
As if in competition with the latest nightclub, the front wall is painted black--floor to ceiling, corner to corner. The pulpit stand, once known as the sacred desk, is nowhere in sight; removed.  Massive overhead batteries of lights shine down and dance around the performers who own 'the stage', as it is now called.

Around this entertainment set, garish multi-colored lights, like visual sirens of Greek mythology, call your attention to various instruments and 'performers' as they try to convince you that they are worshipping a thrice-holy God Who has declared, in no uncertain terms, that He will not share His glory with another.
Meanwhile, the sound is deafening as the thump, thump beat of the instruments literally causes your body to vibrate.  It is reminiscent of the modern adage that when your argument lacks substance, just yell louder. In this case, the choruses used are shallow and repetitious, so they turn up the volume.
Over and over and over and over again they will sing 'we praise you', occasionally inserting the word 'Lord', but never actually demonstrate any intelligent expression of doing so. It's like being stuck in snow. Even as you may rock backward and forward, the wheels of your car keep spinning without gaining the traction needed to propel you forward.
If you want practical examples of praising the Lord, you need look no further than the Psalms. The Who, what, when, why and where are all there. God's person, His attributes, His mercy and love, His salvation, all doctrinal truth--the substance is substantive, and the list is endless. As a means of grace, it is one of the ways we learn Biblical truth, teach theology and doctrine.
Of course, we were encouraged to come back tomorrow because "we're going to have fun".
Church services featuring creative spectacles of light and sound, fog machines, pop music and aerial gymnasts have sparked debate across the country. Supporters claim that such spectacles serve to glorify God and appeal to a younger generation that craves sensory stimulation. Critics worry that these theatrics have replaced genuine worship and sound theological doctrine while confusing the purpose of the Church with that of an amusement park, just to fill the pews.
Embassy Church International of Atlanta is making headlines for its weekly entertainment events featuring an in-your-face ensemble of fog machines, aerial gymnasts, stage lights and energized musical performances that are meant to bring the Gospel alive for worshippers. Gone are the days of sacred singing of hymns to the accompaniment of piano or organ followed by a solemnly delivered Biblical lesson drawn from the pages of God's Word.

Ajani Brown is the Pastor of Embassy Church, which started only five years ago in a living room with twelve people and has since grown to a congregation of around four hundred. According to Pastor Brown, they have "very high energetic worship services where they experience just all types of healing and miracles. So not only do the congregants get a high level of creativity but they also get raw presence and raw glory.
We are taking creativity really to the next level in the church."  Just what is "raw" supposed to imply? By dictionary definition it means "lacking experience or understanding"; it means "not tempered or unbridled".  The Bible, however, instructs us that we must worship God "in Spirit and in truth"; that our singing and praying must be not only with the Spirit, but with the understanding, also.  (I Corinthians 14.15) "For God is the King of all the earth; sing (His) praises with understanding." (Psalm 47.7)
Defending the use of fog machines, Brown went on to say, "For a long time we did not have fog in our services. We didn't have lights in our services. We had great content. We had the music, we had the songs, we had the liturgy. We had all of that. What lighting, what fog did was it helped bring the worshiper into a context of what was happening."  Actually, the use of fog machines speaks volumes beyond their mere presence, as it defines the performers and the audience; they are both left 'in a fog'.
But fog machines and concert lights aren't the only innovations that Embassy International Church seeks to defend in its worship practices. Founding Pastor, 'Apostle' Brian Meadows, announced on April 9th on Instagram that he would make aerial acrobats a regular part of worship services after their performance at the Great Conference on April 7th. The female dancers, suspended above the stage in leg-less leotards, twirled and swung to the captivated audience, supposedly in an exhibition of their God-given talents.
Crossroads Church (entertainment venue) in Cincinnati, Ohio also tried to one-up Cirque du Soleil when they put on a Christmas pageant ten years ago. The entire production had to be cancelled when a performer fell 25 feet to her death before an audience of 2,000 spectators.
Critical voices have spoken up however, calling out what they see as a focus on flash or flesh over substance. One such person is Ann Brock who has made a career writing about Black churches in the United States. She wrote on her blog, "I'm afraid we have strayed far from worship for the sake of entertainment. [...] In an attempt to compete with the world's presentation, we have flooded the church with lights, stages and performances. I'm all for creative expression, but what happens when the production overshadows the praise? Things like this may be appropriate for an artistic night where people are able to express their worship through various methods.

However, doing this during regular service is just too much. [...] there has become too much emphasis on entertainment and enticing people to come in." Another critic pointed out that the bare legs of the attractive young acrobat can be "distracting" and serve to over-sexualize the church service, as if a worship service should be sexualized in the first place.
On the opposite coast in Seattle, Pastor Eugene Cho of Quest Church spoke out against the over-use of technology in worship services, writing on Twitter, "I'm convinced that in the Church today, we need less spotlights, fog machines, formulae and simply more humility and dependence on the presence and power of the Holy Spirit." Two weeks later on June 3rd, Pastor Cho announced his decision to resign as lead pastor.
Meanwhile, Harry Reeder III, senior pastor of Briarwood Presbyterian Church in Birmingham said in an interview, "In our effort to be entertaining, we have cut back on the message and we have cut back on our worship in order for it to be just a simple gathering of entertainment where everybody feels good and has a great experience and, 'By the way, won't you come back to be a part of this church?'"
There is no doubt, as all of the critics readily acknowledge, that technology can enhance a church service if used correctly and discreetly. But as technological marvels and entertainment begin to take center stage, it detracts from the message and the true meaning of worship.
'Pushing the envelope' has become so 'de rigueur' that Grace Cathedral, an Episcopal Church in San Francisco, is testing just how far they can go by bringing worldly entertainment into the church with a Beyoncé Mass that includes pop songs from the musical star. These songs, from the entertainer who dressed as Hindu, African and Roman goddesses in a recent concert, are not Christian in any way.
The Rev. Jude Harmon of Grace Cathedral defends the practice by saying, "I know there are people who will say using Beyoncé is just a cheap way of trying to get people into the church, but Jesus used very provocative images in the stories he would tell to incite people to ask questions about their own religious assumptions.
He regularly provoked. We are following in the way of Jesus." What the Reverend fails to realize is that Jesus provoked and challenged in order to teach and to call into question the faith, morality and wisdom of his audience, not simply to tantalize and stimulate the sensual.
That really is the issue here in each of these churches and the dozens of others like them. Are we inviting spectacle simply to fill the pews or are we turning these efforts towards Godly worship?
The fog machines, aerial ballerinas, Beyoncé concerts, strobe lights and technological gadgets mean nothing if we are just recreating cheap worldly thrills and flash within the walls of God's house.