Your Smart TV Is Watching You 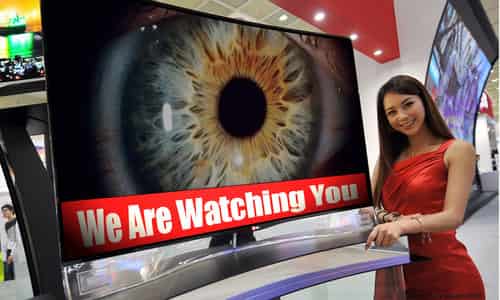 By PNW Staff July 24, 2018
Share this article:
Most have come to expect some level of monitoring of our Internet activity. Tech giants such as Google and Facebook are able to provide free searches and social networks in exchange for targeted ads we watch and that watch us through the use of tracking cookies. But in most people's minds television is different, but is this true?
Until just a few short years ago, the television was a passive receiver of programming signals either through a cable or an antenna, but smart TVs have allowed advertising companies to monitor and track everything that we watch in real time in order to monetize that data.

Approximately 45% of all US households have a smart TV and during setup most owners simply click "agree" to any long, complicated legal forms that appear on the screen. As it turns out, one of those is a 4,000-word privacy policy and a 6,500 word long term-of-service agreement from a company called SambaTV that asks viewers to agree to have their viewing habits closely monitored.
Television sets from Sony, Sharp, TCL and Phillips all come preloaded with SambaTV monitoring software.
At the end of 2016, the company claimed that around 90% of consumers were opting-in for this monitoring, and they are currently keeping tabs on 13.5 million smart TVs across the country, data that they have been quick to monetize to the tune of tens of millions of dollars.
Rather than directly selling the viewing data it collects, SambaTV instead carefully analyzes the content of individual views and then directs targeted ads to that device as well as other Internet connected devices in the home. Citibank, JetBlue and Expedia all pay millions to have their ads appear on the devices of consumers who may have just watched the Travel Channel or some financial news.

The tracking can even differentiate among specific programming content, whether it is liberal or conservative, to direct the most effective ads across all devices. Ever watch a program on television and a few hours later see an advertisement for something related on your smart phone or your desktop computer?
And yet, that is far from the only way in which smart TVs are now being employed to monitor and track their viewers. Apart from the obvious potential of the built-in microphones that can be remotely activated, Facebook has patented an ingenious way to monitor our behavior through supersonic trigger sounds. Though the company claims that it has not employed the feature yet, the potential is alarming.
With this monitoring system, advertising companies would place a high-pitched sonic code, sort of like a Morse Code outside the range of human hearing, into commercials. Facebook apps such as Messenger, already installed on hundreds of millions of smart phones, would be able to detect this code, cause the device to begin recording and then transmit that data (audio recordings from inside users' homes) back to advertising companies.
Why go to all this trouble? For a very simple reason, really. Advertisers want to know whether people are muting their commercials, or leaving the room when they come on. The system is reported to be sensitive enough to determine whether someone is moving across a room, if other ambient noises are drowning out the commercial or whether conversation includes elements of the ad, thus making it an effective ad campaign.

Pause for a moment to think about the implications of this technology. Corporations can secretly embed sounds in television signals that will activate remote listening devices in our cell phones, record the conversations in the privacy of our homes and then send that data to those faceless corporate giants--all without the user's knowledge or informed consent. It is difficult to imagine how this system would not be abused, either by companies themselves or the government.
Our lives are all a little more uncomplicated by having smart devices and connected gadgets, but few stop to consider the amount of privacy we have surrendered in the process. Now we don't just watch our televisions, our televisions both watch and listen to us.