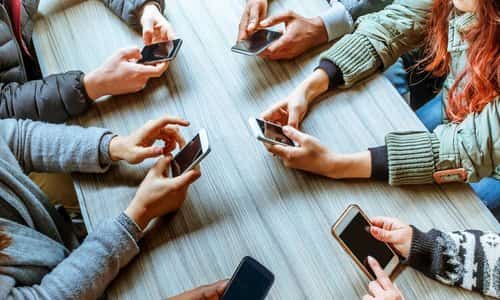 By Michael Snyder/Economic Collapse Blog August 03, 2018
Share this article:
Before televisions and computers were invented, Americans didn't spend any time staring at television and computer screens. They worked hard, raised their families, personally interacted with their communities (remember that?), and generally tried to make the world a better place.
But now for many of us, the "virtual world" actually seems more real than the "real world" does.
In fact, as you will see below, average Americans now spend most of their waking hours staring at a screen. We have willingly connected ourselves to "the matrix", and the amount of time spent connected is rising with each passing year.

A report that was just put out by Nielsen found that we spend an average of 11 hours per day interacting with media...
Americans now spend most of their waking hours watching TV, listening to music, using apps on their smartphones, or otherwise consuming media, a new study finds.
US adults are spending more than 11 hours a day on average--or about two-thirds of their waking time--consuming media in some form, Nielsen showed in its first-quarter 2018 report on US media consumption today (July 31).
It measured, based on its representative panels of TV, radio, and digital households and consumers, activities like watching TV and DVDs, listening to the radio, visiting apps on a smartphone or tablet, and using the internet and game consoles.
No wonder we don't have time to do anything else.
The time Americans spent interacting with various forms of media was up 19 minutes over the previous quarter, and here is how it broke down...
Watching live television: 4 hours, 10 minutes
Watching time-shifted television: 36 minutes
App/Web on a smartphone: 2 hours, 22 minutes
App/Web on a tablet: 47 minutes
Internet on a computer: 39 minutes
Listening to the radio: 1 hour, 46 minutes
Internet connected device: 26 minutes
Game console: 14 minutes
DVD/Blu-Ray device: 6 minutes
It really surprised me how little time Americans spend watching DVDs. I suppose that since everything is going digital that DVDs will someday be relics of a bygone age, but we aren't there quite yet.

Another surprising thing from the report was the difference in behavior between the generations. According to Nielsen, older Americans actually spend the most time consuming media...
Though older generations generally spend the most time with media (adults 35-49 spend over 11 hours a day on it, while adults 50-64 do so at a nearly 13-hour clip), younger generations are at the forefront of TV-connected device and digital usage.
But young adults spend more time than anyone else consuming media on smartphones...
Young adults 18-34 spend 43% of their time consuming media on digital platforms. Almost a third of their time spent with media (29%) comes from apps/web on a smartphone--the most of any measured generation.
If it seems like young people are constantly on their phones, that is because they are. Smartphone use is at an all-time high, and it keeps going up every year.
Sadly, it isn't just in our free time that most of us are willingly connecting ourselves to "the matrix". A different study discovered that the average office worker in America spends 1,700 hours in front of a screen each year...
We're often told to limit the amount of screen time in our daily lives, but for many of us, we don't have much of a choice. A new study finds the average office worker spends nearly 1,700 hours in front of a computer screen over the course of a year.
According to a survey of 2,000 office workers by contact lenses manufacturer Acuvue, office workers spend about 6.5 hours a day sitting in front of their computer.

So when you add the amount of time we spend staring at screens at work to the amount of time that we spend staring at screens at home, for many of us it pretty much takes up almost all of our waking hours.
Is this good for our society?
And we should talk about who controls all of this media that we are consuming. Today, approximately 90 percent of the programming that comes through your television is controlled by just 6 giant media corporations. Of course those 6 giant media corporations are ultimately owned by the elite of the world.
So if you spend several hours watching television each day, you are allowing "the matrix" to fundamentally shape what you think, what you believe and how you view the world.
At least on the Internet there has been more diversity of viewpoints, but now there is a massive effort to censor alternative voices. The elite are attempting to become gatekeepers in the digital world just like they are with every other form of media.
In 2018, major alternative voices are being "shadowbanned", censored or having their accounts terminated altogether by the tech giants. Some large conservative websites have seen their traffic from social media fall by over 90 percent, and many of them have seen a dramatic drop in revenue.
For example, WorldNetDaily (WND) has seen revenue decline by about 60 percent over the last two years...
WND and the rest of the independent media are feeling the heat from the Internet Cartel, which controls traffic, revenue, search power, hosting and distribution of news and information through social media, not to mention retail sales of all books.
It's a scary time of rapidly shrinking traffic and revenues. WND, for instance, has seen drops in revenue from more than $10 million in 2016 to $6 million last year to perhaps as little as $4 million in 2018.
All other forms of media are already completely dominated by the elite, and so we must not allow them to take full control of the Internet.
If you want to change society, it won't do you any good to go out to the street corners or to the marketplaces because nobody will listen to you.
If you want to change society, you have to go online, because that is where the people are.
Right now we are in an information war, and the future of our country is hanging in the balance. So let us fight this information war as hard as we can, because losing is not an option.