The Temple Harp Project: Another Step To Rebuilding The Temple 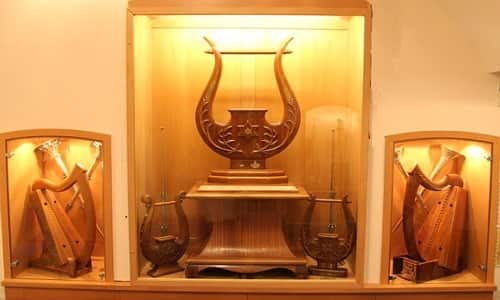 By Adam Eliyahu Berkowitz/Breaking Israel News August 24, 2018
Share this article:
The Temple of Solomon was filled with the music of 4,000 harps and a remarkable couple have been on a lifelong journey to return that music in time for the Third Temple. Praise Hashem with the lyre; with the ten-stringed harp sing to Him. (Psalms 33:2)
They recently released a video depicting the long-awaited fulfillment of the Psalm; a Jewish child returning to Israel removing a harp from a willow where her forefathers had hung it upon going out into exile.

The story of Micah and Shoshanna Harrari is a microcosm of the Jewish exile. As a young couple in the early '70's, they wandered the U.S., living in shacks, teepees, tents and sometimes sleeping outside.
"We were looking for the perfect place," Shoshanna told Breaking Israel News. "For us, that meant someplace beautiful. We lived in some beautiful places but we were always restless. If anyone said, 'you should check this place out,' we would pull up roots and go live there."
At one point in their wanderings, they were living in a shack in a forest in Colorado. With no electricity or running water, their entertainment was limited to reading to each other by candlelight. In the winter, a massive snowstorm buried their cabin, trapping them inside.
They had a plentiful supply of firewood and enough food and water, but they had read all their books. After three days of being trapped, cabin fever began to set in. In desperation, they began to read the bible they carried along their journey but had never read.
"There we were with Avraham and Sarah, our relatives, in the cabin," Shoshanna said. "It was great. This became our main reading material and we were immediately captivated by Hashem's words. When we got to the prophets, one message kept being repeated; that Hashem will call back the Jews so we can settle our land and never be uprooted."
"This blew us away. Every time we read this, we knew it was an invitation to go to the land of our ancestors and help build up our homeland. We knew nothing about Israel but it sounded like our kind of place. We thought we could get a donkey and cart and wander around like Avraham and Sarah."

The message was clear but it took several years for the Harraris to finish wandering. They meandered eastward, living in Vermont for a while. One night, they both woke up with the clear feeling that they needed to move on. The next day, they left, making their way across the Atlantic Ocean.
A few months later, they were living in a teepee in Portugal when the midnight message came to them once again. They drove toward Israel, arriving in Greece in 1982. On a whim, they went to the ticket office for a shipping line and discovered the next boat to Israel was leaving in one hour. They didn't hesitate, jumping aboard immediately. Not so many days later, they landed in Israel.
"The only contact we had was a friend of a friend of a friend in Jerusalem," Shoshanna said. "We knocked on their door and introduced ourselves, not knowing that it was two hours before Rosh Hashanah (the Jewish New Year)."
The holiday settled the matter: they were home. Eventually, the Harraris settled in Tiberias on the shores of the Kinneret (Sea of Galilee) where Micah set up a carpentry shop. Shoshanna had always wanted a harp for some reason she didn't entirely understand.
"I am the daughter of a Kohen so I am sure there is some ancient connection," Shoshanna explained.
Micah was a trained luthier and musical instrument craftsmen, but due to their nomadic lifestyle, had never had the opportunity to work in the field. Perhaps inspired by the Kinneret whose name means 'harp,' he announced to his wife that the time had come for him to fulfill her musical dream.
Such a project required preparation and research. The only harps they were familiar with were the type used to play classical music. They learned that archaeologists had discovered cave drawings of a harp in Megiddo. The drawings were believed to be 3,000 years old, meaning the Megiddo lyre would have been the instrument young David played to soothe a troubled King Saul.

"We had no idea that no one had made a harp like this in 2,000 years," Shoshanna said. "When we first started making harps, we didn't think anyone would even want harps. But we knew we were going to do it anyway."
The first harp took a long time to come together, spending months looking more like scrap wood in their living room than a potential musical instrument worthy to grace the Temple. A random meeting in 1984 with a writer from The Jerusalem Post resulted in an article on the Harrari's David harp project. The article generated unexpected interest and the Harp Project was begun.
As a result of the article, they were contacted by Rabbi Yisrael Ariel, founder of the Temple Institute.
"He told us that one day there would be a Temple and there would need to be harps ready for the Temple service," Shoshanna said.
Rabbi Ariel immediately commissioned a harp for the Temple Institute with the intention that it would be used in the Third Temple. More research revealed that the Temple had both nevel (harp) and kinor (lyre). As donations came in, the Temple Institute commissioned more harps from the Harraris.
Just before Pesach, Shoshanna was overcome with another inspiration.
"I looked around and realized that everything to bring geula (redemption) was really moving. I felt that people should know this, in case they wanted to be part of it."
The Harraris decided to create a video depicting the role of David's harp in geula inspired by Psalms.
By the rivers of Babylon, there we sat, sat and wept, as we thought of Tzion. There on the poplars we hung up our lyres, for our captors asked us there for songs, our tormentors, for amusement, "Sing us one of the songs of Tzion." How can we sing a song of Hashem on alien soil? Psalms 137:1-4
"As we were going to exile in Babylon, the last thing we saw were the harps from the Temple hanging from the trees," Shoshanna said. "The Jews prayed that one day, Jews would return and take the harps off the trees. The whole purpose of music used to be to connect to Hashem. We wanted to bring this back into the world."
This became the theme of the video, depicting the fulfillment of those prayers. A harp is taken from an ancient willow and brought to Jerusalem with singing and joy.
Apparently, interest in the Temple harp is strong since more than 30,000 people have watched the video on the Harrari's Facebook page.
The Temple Harp Project is an ongoing non-profit endeavor to create harps and lyres for the Third Temple.  You can watch the video here:
Originally published at Breaking Israel News - reposted with permission.