What Is America's Prophetic Destiny? 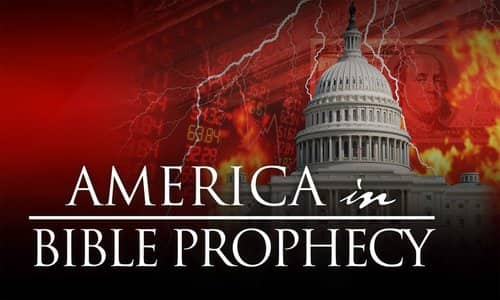 By David Reagan/Lamb/Lion Ministries September 11, 2018
Share this article:
Let's put this topic in perspective with two foundational Scripture passages:
The first is Psalm 33:12 which says: "Blessed is the nation whose God is the LORD." Or, as it reads in Hebrew, "...whose God is Yahweh."
The second is Proverbs 14:34 which reads: "Righteousness exalts a nation, but sin is a disgrace to any people."
The Nations in Prophecy
Ever since I began holding Bible prophecy conferences 38 years ago, the number one question asked during Question and Answer sessions has been, "Where is the United States in Bible prophecy?"
The horrific events of September 11, 2001 intensified the importance and frequency of this question -- and that is certainly understandable.

The Bible is full of prophecies about nations:
Isaiah prophesied in detail about the destinies of Assyria, Babylon, Moab, Syria, Ethiopia, Edom, Arabia, Tyre and Egypt.
Jeremiah covered the same nations, adding Philistia, Kedar, Hazor, Elam and Ammon.
Nearly all the Hebrew prophets spoke about Israel or Judah or both, and many of their prophecies concerned the fate of Jerusalem.
Daniel focused on world empires, and in the process he wrote history better in advance than most historians after the fact.
Daniel and many of the other prophets also spoke about the configuration of nations that would exist in the end times, right before the return of the Messiah. They foretold:
The resurrection of the Roman Empire in Europe.
The re-establishment of the state of Israel.
Israel besieged by surrounding Arab nations.
Israel menaced by Russia and its allies.
And nations in the Far East capable of sending an army of 200 million against the Middle East.
America in Bible Prophecy
The United States in Bible Prophecy
So, where is the United States in Bible prophecy? How could the prophets overlook our nation?
What makes this question even more perplexing is that the signs of the times indicate we are on the threshold of the Tribulation, and we are the world's dominant superpower! So how could the Bible fail to mention us?
The search for the United States in Bible prophecy has been extensive and intensive. It has also been very imaginative.

Isaiah 18
In the 19th Century, one of the favorite locations of the US in prophecy espoused by Bible prophecy experts was Isaiah 18. It speaks of a nation of "tall, smooth-skinned people who are feared far and wide...A powerful nation whose land is divided by waters."
The problem with applying Isaiah 18 to the United States is that the chapter begins by specifically identifying the nation it is talking about, and that is Cush, which is the modern day nation of Sudan.
The river it is referring to is obviously the Nile. And furthermore, the whole setting of the chapter is during the Millennial reign of the Messiah.
Ezekiel 38 & 39
During the 20th Century, the most popular place to find our nation in prophecy shifted to Ezekiel 38 and 39 where the end time battle of God & Magog is described. This is a massive invasion of Israel by Russia and its allies, all of which are modern day Muslim countries.
Ezekiel 38:13 states that when the Russian invasion of Israel occurs in the end times, "the merchants of Tarshish, with all its villages," will speak out against the invasion.
Tarshish was identified as Britain and the "villages" were identified as Britain's English speaking colonies, including, of course, the United States.
Later in the century, the identification of Tarshish shifted to Spain. To compensate for this, the advocates of this theory simply pointed out that Columbus sailed from Spain and thus his discovery of America would make our nation one of Spain's "villages."
I think you should be beginning to see how desperate people have been over the years to find the United States in Bible prophecy.
Actually, the latest anthropological and metallurgical scientific evidence points rather conclusively to the island of Sardinia as the site of Tarshish. Sardinia is the second largest island in the Mediterranean, second only to Sicily. And I don't think anyone will be so bold as to claim that our nation is one of the villages of Sardinia!
The Great Eagle
This brings us to what I consider to be the most imaginative and the silliest identification of our nation in Bible prophecy. It is found in Revelation 12:14 which states that when the Antichrist attempts to annihilate the Jews in the second half of the Tribulation, the Jews in Israel will flee "on the wings of a great eagle."
Believe it or not, some people have seized on this imagery to teach that the United States, whose national symbol is the eagle, will supply the end time air lift that will save the Jewish remnant!
But the Bible is its own best interpreter. And when you look up the phrase, "wings of an eagle," you will find that it is the same one that God used in Exodus 19:4 to describe how He brought the Israelites out of Egypt: "You yourselves have seen what I did to the Egyptians, and how I bore you on eagles' wings, and brought you to Myself."
The same imagery is used in Deuteronomy 32:11 where it speaks of God's protection of Israel in the wilderness:
"Like an eagle that stirs up its nest, that hovers over its young, He [the Lord] spread His wings and caught them, He carried them on His pinions."
In Revelation 12, God is the "eagle," not the United States. What the passage in Revelation 12 is saying is that God is going to supernaturally protect the Jewish people when they flee from the Antichrist into Jordan in the middle of the Tribulation.