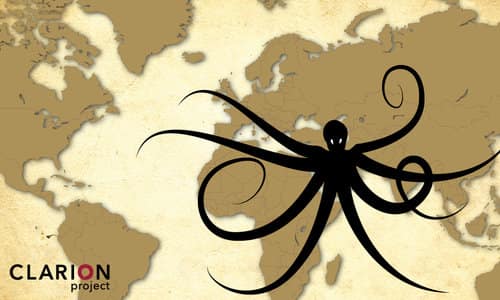 By Joan Swart/Clarion Project September 12, 2018
Share this article:
Following spectacular ambitions and lofty successes of controlling between 20,000 and 35,000 fighters, a taxable population of seven to eight million, a land area the size of Britain in Iraq and Syria, and access to $ 1.7 billion in cash by mid-2014, the scale of ISIS' decline was even more impressive.
By October 2017, its last stronghold, Raqqa, the Syrian town that was once the de facto political capital of the self-declared caliphate, fell in an operation led by the Syrian Democratic Forces. These relentless military campaigns forced the Islamic State into increasingly diminished, fragmented rural areas, its ability to control resources and coordinate operations crippled.

As with other groups that have overplayed their hands before them, the Islamic State had to change its tactics to stay relevant.
New Islamic State Strongholds
Needing continued presence and conquest to succeed, ISIS focused its attention on social media to spread its ideology, utilized migration and the disenchantment of migrants, and pervaded political gaps created by corruption, conflict, and public dissent to develop footholds elsewhere.
Geopolitically, two strategies seem prevalent. Firstly, terrorist groups identify and target areas and populations where conditions favor extremism that the failing state is unable to counter. Most notable such strongholds were established around the Bedouin village Sheikh Zuweid in the North Sinai Governorate of Egypt near the border with the Gaza Strip, the northeast Borno State in Nigeria, territory in Afghanistan near the Pakistan border, and swaths of land in Yemen, Libya, and possibly the Democratic Republic of the Congo, and Somalia.
These areas all share various commonalities, such as a sizable Muslim population, ongoing conflict that the failing or failed state cannot control, and groups aggrieved by government oppression or power grabs. Militarization means that weapons are freely available, and groups use the areas as training and recruitment centers.
Expanding Through Affiliation
Furthermore, the presence of an Islamic State structure and fighters in some areas pose a threat to neighboring countries, as they seek to expand, often by infiltrating or affiliating existing criminal gangs, dissident or extremist groups there. Previously little-known Jihadi groups may be swallowed up by larger groups with widely known brands, established influence, and more substantial funding. One such development to keep an eye on is the recent rise of Jihadi terrorism in northern Mozambique.

Since October 2017, more than 20 skirmishes and attacks have taken place in Cabo Delgado Province, the area bordering Tanzania. Although the perpetrator, Ansa al-Sunna, a militant Islamist group aspiring to establish an Islamic State in Mozambique, does not have formal links with the Islamic State or al-Qaeda, it shares much of the same ideology and goals. The movement is anti-Christian and anti-Western, views institutions such as hospitals and schools as secular and anti-Islamic and calls for sharia law.
Such shared beliefs attract recruits and mercenaries from across their northern borders in Tanzania and Somalia. Ansa al-Sunna is widely viewed as an emerging threat, although security analysts argue it is too soon to suspect cross-border organizational influence from any larger terrorist group. However, the presence of oil, lack of state control, ongoing conflict, the potential for land control, and poor socioeconomic circumstances must have put Cabo Delgado on the radar of terrorist leaders hungry to re-establish glory.
Lone Wolves and Small Terror Cells
The second pillar of the Islamic State's evolving strategy is encouraging the emergence of small independent terror cells and lone-wolf terrorist operators in Western countries. Most of these states have rapidly growing immigrant populations which are relatively isolated, subjected to rates of unemployment above those of their peers, with family legacies of cultural diaspora and ideology, and often involved in diverse criminal activities.

Both al-Qaeda and Islamic State publish glossy English-language electronic magazines online targeting potential recruits and financial sponsors in the West. In conjunction with their social media networks, this has proven successful to reach a global audience. The magazines are useful brand-building tools. Boasting about successes, glorifying leaders and martyrs, calling for individual Jihad, and providing operational instructions and target suggestions for leaderless attacks, the role of the magazines in encouraging transnational terrorism is concerning.
The Influence of Social Media
Although the structural organization of Islamic State's propaganda machine, al-Ḥayāt Media Center, appeared to have cut back to primarily Arabic-language video messages, with its Rumiyah magazine ceasing publication in September 2017, social media support has not dwindled despite the efforts of mainstream platforms such as Twitter, Facebook, and YouTube to suspend or delete hundreds of thousands of accounts since 2015.
In addition to smart marketing initiatives that ensure social media accounts stay elusive to content management efforts, ISIS started using channels that encrypt their communications (e.g. Telegram), allow anonymous posting without registration (e.g. Justpaste.it), or created their own content-sharing pages and apps (i.e. Manbar.me, The Dawn of the Glad Tidings).
The use of these social media platforms has been implicated in various attacks in the West, mainly in the radicalization of the perpetrators, including the 2017 Manchester bombing, 2016 Pulse nightclub shooting in Orlando, and the 2015 San Bernardino shooting.
Training and Operational Support
In addition to lone wolves with only a tenuous or questionable connection to Islamic State, despite claims to the contrary, forming and employing small terror cells has been instrumental in many of the recent attacks in Europe.
Recruiters are active in Muslim-concentrated areas in European cities, identifying mostly at-risk young men of immigrant descent or migrants themselves.
Members form small cells, and some recruits are chosen and psychologically prepared to become suicide bombers.
Suicide attacks in the West tend to be more elaborate and high-tech compared to those perpetrated by lone wolves. The Chicago Project on Security and Terrorism (CPOST), an open-source database maintained at the University of Chicago, lists 16 separate terrorist-related suicide-bombing incidents in the West since 1999.
These include five coordinated attacks that involve 14 of the events, namely the 9/11 attacks, the 2004 Madrid train bombings, the 7/7 London bombings in 2005, the November 2015 Paris attacks, and the 2016 Brussels bombings. These were all intricately planned and synchronized by al-Qaeda central (2001 - 2005) or Islamic State (2015 - 2016) to cause the most disruption and media attention.
The bombs are relatively sophisticated and require logistical and technical support to be effective. For instance, experts believed an experienced bomb maker probably built the explosive device concealed in Salman Abedi's backpack at the Manchester Arena as it contained TATP explosive, an acetone hydroxide trimer made from household ingredients, linked to a powerful 12-volt motorcycle battery.
The design also appeared to include a dual detonating system consisting of a manual plunger switch and circuit board with a timer or remote receiver, packed with screws and nuts as shrapnel in a lightweight metal container.
The Use of Low-Tech Weapons
Compared to the relative sophistication of explosive devices as terrorist weapons, ISIS has also been advocating the use of low-tech methods to prospective lone wolf terrorists to fulfill their Jihad obligation. These weapons are easy to come by, inexpensive, tough to trace, concealable, and challenging to defend.
A list of more than a hundred lone wolf attacks in Europe, USA, Canada, UK, and Australia since May 2014 revealed that in more than half of the attacks (54%) the perpetrators used a knife, ax, machete, hammer, or box cutter, while, 18% of the cases involved ramming pedestrians with a car, truck, or van.
Although these attacks tend to be less lethal - an average of five killed per lone wolf attack and slightly higher when using a vehicle (eight deaths per attack) - compared to suicide bombings (an average of 13 deaths per attack), it favors an impromptu, solo operator. It is also the less expensive and secure option for terrorist groups if they can solicit it successfully while garnering sought after propaganda.
A Strategy Readjusted
Therefore, with the fierce resistance suffered in conventional warfare, Islamic State has revised its strategy to avoid major battlefield engagements, direct, large command and control operations, while instead focusing on encouraging leaderless resistance, enabling small terror cells and coordinated attacks, and establishing safe pockets in failed states for training, operational logistics and supply, and financial transactions.
In essence, it is disconnecting from a physical, concentrated presence, while sharpening its online presence to fight an ideological battle and convince followers and prospects to get skin in the game on its behalf.
Originally published at Clarion Project - reposted with permission.