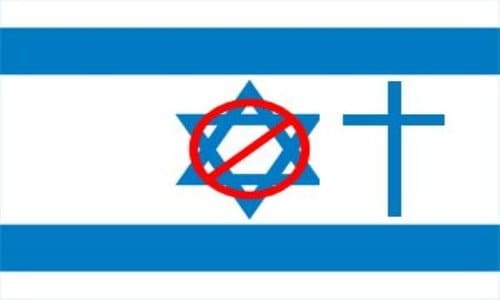 By Michael Brown/AskDrBrown.org May 28, 2019
Share this article:
Jesus is my All in All. He is my Lord, my God, my Savior, my Redeemer, my King. He is my Life. Outside of Him, I have nothing. Outside of Him, I am nothing. Jesus is also the Messiah of Israel, and as Israel's Messiah, He confirms -- not cancels -- the Father's promises to the patriarchs.
These are Paul's exact words in Romans 15:8-9: "For I tell you that Christ became a servant to the circumcised to show God's truthfulness, in order to confirm the promises given to the patriarchs, and in order that the Gentiles might glorify God for his mercy. As it is written, 'Therefore I will praise you among the Gentiles, and sing to your name.'"
How could it be otherwise? How could it be that Israel's Redeemer would cancel the promises God gave to Israel? How could it be that the long-awaited Messiah would nullify the oath God swore to the patriarchs?
Yet this is what is being taught aggressively by an evangelical news network, a network that is spreading lies, misinformation, and exaggeration about Israel and the Jewish people on a regular basis.

TruNews' Altar Call
In fact, in what must be one of the sickest moments in the history "Christian" broadcasting, one of the hosts of this network -- ironically named TruNews -- gives an altar call for Christians to repent for standing with Israel.
I kid you not. Watch it for yourself here, starting at 1:20:28 until 1:22:41.
The host, Doc Burkhart, leads his audience in a "sinner's prayer." He tells viewers to confess to God, "Lord, I'm so sorry. I don't how I was so deceived. I don't how I was so bewitched by all of this.
"I thought it was a good thing to support the people of Israel. I thought it was a good thing to help Israel. But now I see it's just people using the name of Israel, people using the people of Israel in order to line their own pockets, in order to build their own kingdoms, in order to make themselves feel important."
Help us champion truth, freedom, limited government and human dignity. Support The Stream »
Burkhart then calls his viewers to repent of this and turn the other way, confessing, "Jesus, You are my Zion. Jesus, You are my Promised Land. Jesus, You are my Temple. Jesus, You are my Eternal Capitol, Lord."
And in true "evangelical" fashion, Burkhart then urges those who responded to this prayer to contact his network.
How judgmental. How unchristian. How deceived.
What an ugly mixing of truth with error.

Jesus Confirms God's Promises
To repeat: Jesus is my All in All, my Everything. And He confirms, not cancels, God's promises to the patriarchs. Chief among those promises was the promise of the Land of Israel as a lasting inheritance.
As the psalmist wrote: "He remembers His covenant forever, the word that He commanded, for a thousand generations, the covenant that He made with Abraham, His sworn promise to Isaac, which He confirmed to Jacob as a statute, to Israel as an everlasting covenant, saying, 'To you I will give the land of Canaan as your portion for an inheritance.'" (Ps 105:8-11)
To repeat Paul's words: "For I tell you that Christ became a servant to the circumcised to show God's truthfulness, in order to confirm the promises given to the patriarchs."
Sorry, TruNews, but I'll stay with Scripture.
Sorry, Doc Burkhart, but I'll not repent of standing with the purposes of God.
For the record, I have called out TruNews publicly (see here and here) and reached out privately several times, to no avail.
TruNews' Invitation
Initially, in response to my challenge, TruNews invited me to come on their show, and I responded immediately with an enthusiastic "Yes." I simply requested that, for the sake of fairness, their leader, Rick Wiles, join me on my show as well.
He was not willing.
I then I suggested we have a public debate. They said they were not interested in debate, but that I should rebuke Ben Shapiro as an antichrist. (I'm not making this up.)
Finally, when their anti-Israel, anti-Jew campaign became even more pitched and ugly, I told them I would join them on their show as long as I was given equal time with their panel and that the show was aired unedited.
They said no to my offer, offended that I characterized their views as antisemitic. Sorry, but when you claim that the sexual revolution was a Zionist conspiracy -- among a litany of other accusations -- you're being antisemitic.
Now, TruNews is leading Christians in a sinner's prayer for standing with Israel. What's coming next?

The Truth of Scripture
As for the idea that Jesus is our Temple, our Zion, and our Promised Land, this is not Scriptural.
Rather, in Him, we have become a holy Temple, with Jesus as the chief Cornerstone (see 1 Corinthians 3:16-17; Ephesians 2:19-22; 1 Peter 2:5). Jesus is not "our Temple."
And nowhere in the New Testament is it written that Jesus is our Promised Land or our Zion. Instead, the Gospel authors tell Zion -- meaning Jerusalem and the Jewish people -- that Jesus, the King, is coming to Zion (see Matthew 21:5; John 12:5; quoting from Zechariah 9:9).
And Paul says that God will lay in Zion a Stone of stumbling (speaking of Jesus), and that He, the Redeemer, will come from Zion (Romans 9:33; 11:26; quoting from Isaiah 28:16; 59:20-21).
Even the heavenly Zion is a place, not a person (see Hebrews 12:22). In fact, Jesus, the Lamb, stands in Zion (see Revelation 14:1). He is not Zion -- or the Promised Land.
Tragically, Burkhart relies on his viewers' love for Jesus to confuse the issues, as if they are being unspiritual -- not Christ-centered -- by standing with Israel or recognizing God's hand at work in our day.
Nothing could be further from the truth. To say it once more: Christ, the Messiah, confirms God's promises to the patriarchs, and those promises include the Land of Israel as a lasting inheritance.
Burkhart's Mistake
Burkhart and TruNews might just as well urge a starving person to repent for taking bread from a Christian missionary, leading them in a prayer of repentance that said, "Lord, forgive me for my sinfulness. I was being so carnal. I confess that Jesus is my Bread of Life."
That's just as ridiculous as the prayer he led his viewers in, confessing their "sin" of standing with Israel (not to mention slandering those who do as stand with Israel, branding us as duplicitous, money-grubbers).
The only difference in the two prayers is that Jesus, in fact, is our Bread of Life, whereas He is not our Promised Land or our Zion (whatever that even means).
Nothing Christian About This
TruNews has now crossed a precarious, ugly line. Let the viewers beware.
Had they simply brought valid criticisms against the State of Israel, I would not be writing this. I would even affirm some of those criticisms myself.
Had they simply questioned where the nation of Israel today is a fulfillment of biblical prophecy, I would not have called them out. I recognize that Christians can differ over prophecy.
Had they simply brought legitimate criticisms against the Jewish people as a whole, I would not be concerned. I bring such criticisms as well.
But they have now equated Christian Zionism with rebellion against God and denial of the centrality of Jesus, at the same time spreading all kinds of libels against the Jewish people and the Jewish religion.
There is nothing Christian about this. I urge them to repent.
Originally published at AskDrBrown.org - reposted with permission.