When A Physically Healthy Teen Is Euthanized 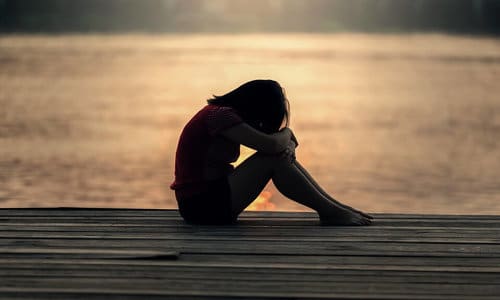 By Michael Brown/AskDrBrown.org June 06, 2019
Share this article:
The story is heartbreaking beyond words. It is terribly sad, tragic, agonizing.
When you read it, you'll wish you could somehow turn back the clock and change the final outcome. But it's too late for that. All we can do is mourn a lost life -- and sound the alarm.
What else can we say or do when a physically healthy, 17-year-old girl in the Netherlands chooses to be euthanized because of severe depression and emotional pain?

As reported by Gateway Pundit, this past Sunday, Noa Pothoven was euthanized after battling "with depression after being molested as a young child."
She posted on Instragram the day before she died that she was "still breathing, but no longer alive."
All we can do is mourn a lost life -- and sound the alarm.
She wrote: "I get straight to the point: within a maximum of 10 days I will die. After years of fighting and fighting it is finished. I have now stopped eating and drinking for a while, and after many conversations and reviews it has been decided that I will be released because my suffering is unbearable. It's finished. I have not really been alive for so long, I survive, and not even that."
Did I say this story was heartbreaking?
The Devastating Impact of Childhood Sexual Abuse
First, we cannot overstate the devastating damage caused by sexual abuse, especially when the victim is a minor. It can totally destroy someone's life, leading to depression, substance abuse, self-harm (including suicide), or deviant and destructive forms of behavior.
Although I am not a professional counselor, I have heard scores of stories from childhood victims of sexual abuse, some of them unbearably painful just to hear, let alone to experience.
Help us champion truth, freedom, limited government and human dignity. Support The Stream »
In the late 1990's, a blind 16-year-old girl explained to me how she became blind. It began with being sexual abused as a child, causing her so much pain that she became a drug user. But the drugs could not heal her wounds, so she and her boyfriend made a death pact, persuading another friend to shoot them both in the head. (I have to hold back tears as I write.)

The friend succeeded in killing her boyfriend. She, however, survived the gunshot to the brain, only to be left blind, adding to her agony. (The friend, of course, went to jail for his actions.)
Thankfully, this young woman had come to know Jesus in a personal way and had found a ray of hope. Otherwise, her story, like the story of millions of other victims of abuse, would still be dark and hopeless.
She Saw No Way of Escape
As for the teen who chose to end her life in the Netherlands, the New York Post reports that she was "sexually abused at 11 and raped three years later," and this was the cause of her "unbearable" pain.
We dare not criticize her for the decision to end her life, especially in a culture that allows physically healthy children as young as 12 to choose euthanasia as long as they parental consent and a doctor's recommendation.
Obviously, in her mind, she was fighting a losing battle against her pain and saw no possible way of escape. And the only difference between Noa and thousands of other young people who commit suicide is that she chose to do so through a government system. But it is that system that must be criticized.
A System That Offers Death Instead of Hope
It is a system that does not rally around a victim and say, "One way or another, we will find a way to help you. One way or another we will help you to get to the route of your agony and find a lasting cure."
Instead, the system says, "If you are deeply depressed and utterly hopeless, the solution is death. All your troubles will go away."
Is this how we treat human life? Do we put people to sleep, like dogs and horses, because their emotional pain is deemed insufferable?
CBS News reported in August, 2017 that, "Euthanasia has become a common way to die in the Netherlands, accounting for 4.5 percent of deaths, according to researchers who say requests are increasing from people who aren't terminally ill.
"In 2002, the Netherlands became the first country in the world that made it legal for doctors to help people die. Both euthanasia, where doctors actively kill patients, and assisted suicide, where physicians prescribe patients a lethal dose of drugs, are allowed. People must be 'suffering unbearably' with no hope of relief -- but their condition does not have to be fatal."
The CBS article cites Scott Kim, a bioethicist at the U.S. National Institutes of Health who raised concerns about the growing trend towards euthanasia.
"These are old people who may have health problems, but none of them are life-threatening. They're old, they can't get around, their friends are dead and their children don't visit anymore. This kind of trend cries out for a discussion. Do we think their lives are still worthwhile?"

Is This What We Want?
All the more must we ask questions about the meaning (and value) of life when it is a young person choosing euthanasia. Was there really no better solution than physician-assisted suicide?
There is, of course, the gospel answer, and it is one in which all things are possible with God, in which hope springs eternal, in which Jesus heals the brokenhearted.
But there is also a societal answer which says to someone like Noa, "We care about you too much as friends and family to let you die."
And that's where we here in America need to stand back and do some serious soul searching, as more and more states open the door to euthanasia.
Just this week the Maine Legislature voted to legalize assisted suicide.
The bill now goes to Democratic Gov. Janet Mills, who has 10 days to act on the bill and has not indicated whether she will let it become law. Her office said she has not yet taken a position.
If Mills signs it, Maine would join seven other states, including New Jersey this year, and Washington, D.C., with similar laws, according to the Death With Dignity National Center and the Death With Dignity Political Fund.
Maine's bill would allow doctors to prescribe terminally ill people a fatal dose of medication. The bill declares that obtaining or administering life-ending medication is not suicide under state law. Still, it effectively legalizes it.
Let us look into the eyes of this 17-year-old whose life was first marred and destroyed and then taken away prematurely. And let us ask ourselves, is this what we want for our country? Are we sure?
As for those who were close to Noa, may they look to the Lord to find meaning and purpose and hope in the midst of their tragic loss. Perhaps there can be something redemptive about her story.
Originally published at AskDrBrown.org - reposted with permission.