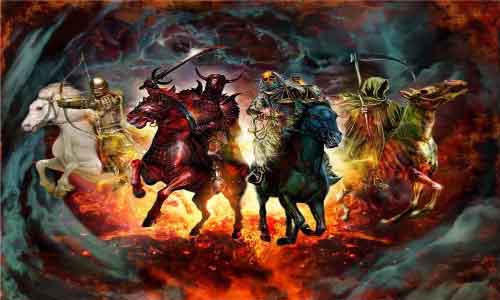 By Jan Markell - Olive Tree Ministries January 04, 2016
Share this article:
Things are not falling apart -- they are falling into place. If Jesus chastised the Pharisees for not knowing the signs of His first coming, why would we not be expected to be aware of today's apocalyptic signs? Here are some of the top prophetic developments of 2015.
1)    Israel's worsening isolation. (Zechariah 12:3) The Left in America under Barack Obama abandoned her some years ago. With the defeat of Canada's Stephen Harper, Israel was left only with some evangelical Christians spread around the world. She has no superpower backing.
2)   The "days of Noah" are back. (Matthew 24:37)  Everyone is doing what is right in their own eyes. (Judges 17:6) Lawlessness is the order of the day. Evil is glorified. The White House was adorned with the colors of the homosexual rainbow and Hillary Clinton has a campaign ad with homosexuals engaged in debauchery as she celebrates their actions.
3)   The disillusionment with today's politician is setting the stage for a "man with a plan" who will not be a politician but who will have the answer to all the world's problems. We don't know his name. We know his title is Antichrist. He may be the only one who can stabilize the ISIS crisis being planned for a naive Western world.

4)   The rise of strong delusion. (II Thessalonians 2:10-12). Simply put, God sends a strong delusion to those who choose not to believe the gospel of Jesus Christ. Those who take delight in mocking and rejecting Him, He will condemn, confuse their thinking, and cause them to believe fables. And they do!  Islam is good and peaceful; guns are evil; climate change is more dangerous than jihadists; Israel is the bad guy and the Palestinians are the new heroes in the church today; ISIS isn't Islam; Muslim refugees are peaceful and will help the Western world. This is an "Alice-in-Wonderland" world. Christians don't fit. The Mad Hatter rules.
5)   The further decline of America. She is not in the Bible in the end-times. Russia and Iran are the primary players in the Mideast now. America's influence for good is vanishing under Barack Obama. America will blend into global government.
6)    America is being given over to paganism. A few months ago the Hindu goddess Kali appeared on the Empire State Building in New York City. Twenty years ago this was unthinkable. It is now cool.
7)   Israel is being prepared for the Antichrist. She is surrounded by enemies. She has Hezbollah, ISIS, Russia and Syria to the north and East and Hamas to the south in Gaza. Iran boasts daily that she will dump nukes on Israel. At some point she will cave to these threats and call on the Antichrist to make a peace treaty -- particularly in light of the loss of American support.
8)   Gog is now on the move.  If Gog is Russia, Vladimir Putin has re-built her from the days when Ronald Reagan reined her in. Russia is advancing in many places.  All the Gog-Magog nations are aligning and are in the news: Iran, Russia, Turkey, Libya, and more. Prominent Bible-players are moving around as though they were on a chess board.
See Ezekiel 38-39.
9)    Israel has been bombing the suburbs of Damascus taking out concealed weapons. The Bible foretells a time when Damascus will become a ruinous heap. (Isaiah 35:1)
10)   Christians are mocked as never before and Jews are fleeing to Israel at a pace not seen since post WW2.  (Matthew 10:22) Only Islam is glorified, honored, and protected. In the Iraq/Syria region, a Christian is slaughtered every 5 minutes, yet few show any concern. Christianity is being erased from the region of its birth.  All of this intensified in 2015.
11)  The technology giants want to suppress the truth and marginalize Christians.  From YouTube, to Google, to Facebook, to Twitter, and more, the gospel message is censored and evil is glorified. They are preparing the way for "Mark of the Beast" technology. This was on overdrive in 2015. This ministry came under the gun and was censored more than once. Stories reveal that Windows 10 actually spies on emails, credit cards, and more.
12)   There was a cry for a global religion from Pope Francis to the Parliament of World Religions in Utah in late 2015. If the world is ever to be one, religions also must be united.  Pope Francis revealed himself to be an apocalyptic figure in 2015. We cannot "pin the tail of the False Prophet" on him quite yet, but even conservative Catholics are troubled by this Jesuit Pope. In fact, this Pope represents Marxism, environmentalism, the new world order, global government, sustainable development, the Jesuit agenda, unity of faiths, a global constitution, a global court, and a departure from Catholic traditions.  He is surely a harbinger of a global religion.
13)   Globalism went on overdrive thanks to Barack Obama, the United Nations, Pope Francis, and a consortium of worldwide Leftists.  John Lennon, who "imagined" all of this decades ago, would be proud!

14)   The push to make cash illegal intensified in 2015. The move to a cashless society won't happen overnight.  Instead, it is being implemented very slowly and systematically in a series of incremental steps.  All over the planet, governments are starting to place restrictions on the use of cash for security reasons.
15)   Israel's Temple Mount has been a focal point for turmoil this year.  With stage-setting for fulfillment of Bible prophecy during this Church Age winding up, it should be of no surprise that there has been tension on Mount Moriah. That may be the most contested 35 acres on the planet.
16)   This was the year Bible prophecy was mocked and attacked more than ever! Believers in our "blessed hope" were called "End-time Eddies and Esthers." While this has always existed, now more and more prominent teachers are telling us not to waste our time on doom and gloom.
17)    Liberal, Godless Europe imploded. Leaders like Germany's Angela Merkel lost their minds, put their people at huge risk as terrorists took advantage of the "refugee" situation, and have made Europe a time bomb. The Antichrist will take advantage of this as well.
18)   This was the year evangelicals began accepting the gay agenda and some asserted that Allah and Jehovah are the same. The voices from the religious Left encouraged this.  The great end-time falling away has much of the church going over a cliff with results that cannot be rectified.  Finding a solid church became a believer's biggest challenge in 2015.
Compiled By Jan Markell/Olive Tree Ministries