The Cemetery Of The Giants 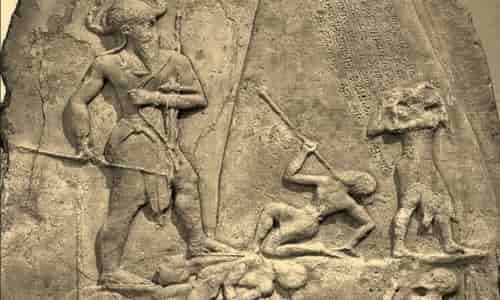 By PNW Staff May 25, 2016
Share this article:
"There were giants in the earth in those days..." Gen 6:4
It seems that mankind has questioned the reality of the existence of giants at least since giants were mentioned in Genesis.

Nearly every place around the world has legends of giants dwelling in the land. Greek and Roman mythology mentions the Titans and Norse mythology contains stories of the Frost giants of Jötunheim.
Well known first-century Jewish historian Flavius Josephus wrote about the history of the Jewish War in 79 AD and spoke of giants:
"There were giants. Much larger and shaped differently than normal people. Terrible to behold!"
Many of these stories are not limited to the ancient past but are also part of our more recent history.
When Abraham Lincoln made his first visit to Niagara Falls in 1848, he wrote of giants in his notes:
When Columbus first sought this continent - when Christ suffered on the cross - when Moses led Israel through the Red Sea - nay, even when Adam first came from the land of his Maker - then as now, Niagara was roaring here. The eyes of that species of extinct giants, whose bones fill the mounds of America, have gazed on Niagara..."
In his autobiography, "Buffalo" Bill Cody wrote the following words about a legend recounted to him by members of the Sioux tribe.
It was taught by the wise men of this tribe that the earth was originally peopled by giants, who were fully three times the size of modern men. They were so swift and powerful that they could run alongside a buffalo, take the animal under one arm, and tear off a leg, and eat it as they ran. So vainglorious were they because of their own size and strength that they denied the existence of a Creator. When it lighted, they proclaimed their superiority to the lightning; when it thundered, they laughed.
This displeased the Great Spirit, and to rebuke their arrogance he sent a great rain upon the earth. The valleys filled with water, and the giants retreated to the hills. The water crept up the hills, and the giants sought safety on the highest mountains. Still the rain continued, the waters rose, and the giants, having no other refuge, were drowned.
It is interesting that much of giant lore includes descriptions of a flood sent by God (or the gods) to destroy these wicked people. Could it be that while the Bible contains the true history of our past, these groups are simply repeating their own distorted versions of world history prior to and perhaps after the dispersion at Babel?
Many such stories contain exaggerations but is it reasonable to automatically reject every one of these traditions, or, like most legends, is there possibly some truth behind the them, as is often the case?
The Biblical support for the existence of giants is overwhelming although many details as to their nature and number are still debated.  What is perhaps more controversial today is the quest to find giants remains.

Many claims of giant skeletons have been made over the past few centuries, especially in the nineteenth century.
One such place can be found in Ecuador known as the "The Cemetery of the Giants".
Father Carlos Vaca was a priest in Ecuador in 1964 when villagers contacted him to examine some strange bones that had been found. The bones were eventually taken to Austria for further analysis and would be featured in an exhibit, Unsolved Mysteries.
The bones were deemed to be human and samples contained a complete shinbone. Whoever belonged to the skeleton stood at a whopping 7.6 meters tall (25 feet). The site of the skeletal discoveries was named Cemetery of the Giants by the locals.
Almost fifty years later, a 2012 exploration team discovered an ancient pyramid network in the Ecuadorian-Amazon jungle, a site unknown to anyone, including the locals. Author Bruce Fenton, also a researcher, believes the site is the Lost City of the Giants because of local legends of giants who once lived in the region and the giant tools found in the area.
An internet search of giant skeletons will prove futile because of the photo shopping over the years. Apparently some jokesters are determined to mock the many Biblical references to giants, because they deem the stories as mythology. However, discoveries continue.
Below the surface of Death Valley, a 1931 discovery unearthed human skeletons approximately nine feet tall.
A January 2015 discovery in Bulgaria at the site of the ancient Greek city Odessos came as no surprise to some of the locals. There was a 6,000-year history full of stories about giants. The accidental discovery of a skeleton described as "very tall" and "impressive" offered validity to the legends.
Giant footprints have been discovered all over the world. "Goliath's Footprint" in South Africa measures 4-feet. A 1926 edition of The Oakland Tribune reported 5-foot long footprints on a cliff in San Jose, California.
Christian researcher L.A. Marzulli has been at the forefront of leading the charge to explore such claims around the world and believes there is startling evidence to suggest that there has been a massive cover up of what he believes are the remains of giants.
Marzulli has teamed up with film producer Richard Shaw to create The Watchers series, a set of DVD documentaries examining many issues of the supernatural from a Christian worldview.  His latest film, Watchers 10 is coming soon and explores the subject of giant remains more in-depth.  You can learn more about it by viewing the trailer below.