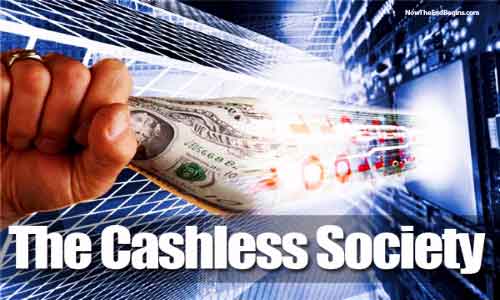 By Michael Snyder - The Economic Collapse Blog January 04, 2016
Share this article:
Did you know that 95 percent of all retail sales in Sweden are cashless?  And did you know that the government of Denmark has a stated goal of "eradicating cash" by the year 2030?
All over the world, we are seeing a relentless march toward a cashless society, and nowhere is this more true than in northern Europe.
In Sweden, hundreds of bank branches no longer accept or dispense cash, and thousands of ATM machines have been permanently removed.  At this point, bills and coins only account for just 2 percent of the Swedish economy, and many stores no longer take cash at all.

The notion of a truly "cashless society" was once considered to be science fiction, but now we are being told that it is "inevitable", and authorities insist that it will enable them to thwart criminals, terrorists, drug runners, money launderers and tax evaders.
But what will we give up in the process?
In Sweden, the transition to a cashless society is being enthusiastically embraced.  The following is an excerpt from a New York Times article that was published on Saturday..
Parishioners text tithes to their churches. Homeless street vendors carry mobile credit-card readers. Even the Abba Museum, despite being a shrine to the 1970s pop group that wrote "Money, Money, Money," considers cash so last-century that it does not accept bills and coins.
Few places are tilting toward a cashless future as quickly as Sweden, which has become hooked on the convenience of paying by app and plastic.
To me, giving money in church electronically seems so bizarre.  But it is starting to happen here in the United States, and in Sweden some churches collect most of their tithes and offerings this way..
During a recent Sunday service, the churchs bank account number was projected onto a large screen. Worshipers pulled out cellphones and tithed through an app called Swish, a payment system set up by Swedens biggest banks that is fast becoming a rival to cards.
Other congregants lined up at a special "Kollektomat" card machine, where they could transfer funds to various church operations. Last year, out of 20 million kronor in tithes collected, more than 85 percent came in by card or digital payment.
And of course it isnt just Sweden that is rapidly transitioning to a cashless society.  Over in Denmark, government officials have a goal to completely do away with paper money by the year 2030..
Sweden is not the only country interested in eradicating cash. Its neighbor, Denmark, is also making great strides to lessen the circulation of banknotes in the country.
Two decades ago, roughly 80 percent of Danish citizens relied on hard cash while shopping. Fast forward to today, that figure has dropped dramatically to 25 percent.
"Were interested in getting rid of cash," said Matas IT Director Thomas Grane. "The handling, security and everything else is expensive; so, definitely we want to push digital payments, and thats of course why we introduced mobile payments to help this process."
Eventually, establishments may soon have the right to reject cash- a practice that is common in Sweden. Government officials have set a 2030 deadline to completely do away with paper money.
Could you imagine a world where you couldn't use cash for anything?
This is the direction things are going  especially in Europe.

As I have written about previously, cash transactions of more than 2,500 euros have already been banned in Spain, and France and Italy have both banned all cash transactions of more than 1,000 euros.
Little by little, cash is being eradicated, and what we have seen so far is just the beginning.  417 billion cashless transactions were conducted in 2014, and the final number for 2015 is projected to be much higher.
Banks like this change, because it enables them to make more money due to the fees that they collect from credit cards and debit cards.
And governments like this change because electronic payments enable them to watch, track and monitor what we are all doing much more easily.
These days, very rarely does anyone object to what is happening.  Instead, most of us just seem to accept that this change is "inevitable", and we are being assured that it will be for the better.
And no matter where in the world you go, the propaganda seems to be the same.  For example, the following comes from an Australian news source..
AND so we prepare to turn the page to fresh year  2016, a watershed year in which Australia will accelerate towards becoming a genuine cashless society.
The cashless society will be a new world free of $1 and $2 coins, or $5 or $10 bank notes.
A new world in which all commercial transactions, from buying an i-pad or a hamburger to playing the poker machines, purchasing a newspaper, paying household bills or picking up the dry-cleaning, will be paid for electronically.
And in that same article the readers are told that Australia will likely be "a fully cashless society" by 2022..
Research by Westpac Bank predicts Australia will be a fully cashless society by 2022  just six years away. Already half of all commercial payments are now made electronically.
Even in some of the poorest areas on the entire globe we are seeing a move toward a cashless society.  In 2015, banks in India made major progress on this front, and income tax rebates are being considered by the government as an incentive "to encourage people to move away from cash transactions".
Would a truly cashless society reduce crime and make all of our lives much more efficient?
Maybe.
But what would we have to give up?
To me, America is supposed to be a place where we can go where we want and do what we want without the government constantly monitoring us.
If people choose to use cashless forms of payment that is one thing, but if we are all required to go to such a system I fear that it could result in the loss of tremendous amounts of freedom and liberty.
And it is all too easy to imagine a world where a government-sponsored form of "identification" would be required to use any form of electronic payment.
This would give the government complete control over who could use "the system" and who could not.  The potential for various forms of coercion and tyranny in such a scenario is obvious.
What would you do if you could not buy, sell, get a job or open a bank account without proper "identification" someday?
What you simply give in to whatever the government was demanding of you at the time even if it went against your fundamental beliefs?
That is certainly something to think about.
Many will cheer as the world makes a rapid transition to a cashless society, but I will not.  I believe that a truly cashless system would open the door for great evil, and I dont want any part of it.
What about you?
Would you welcome a cashless society?