Radical Islam By The Numbers - How Widespread? 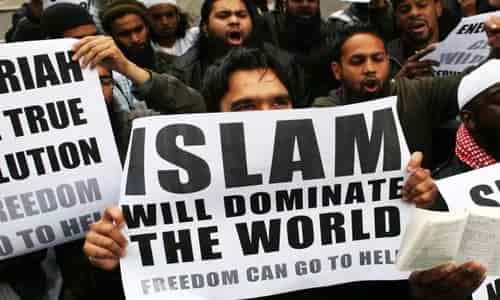 By PNW Staff June 22, 2016
Share this article:
The name Islamic State is a problematic construct because it implies a unity within the fractured religion of Islam where, clearly, none exists, yet movements like al-Qaeda and ISIS have come to serve as focal points for violent elements of a religion that draw support from the 1.6 billion Muslims spread throughout the world.

If we accept the premise that there are two types of Muslims, those who are radical and capable of violence and those who moderate and peace loving, what percentage of Muslims worldwide could we expect to find in the first group?
What percentage support ISIS explicitly or are in favor of terrorist violence, extreme Sharia law and the subjugation of women?
In what has become an oft-repeated truism, few would doubt that the majority of the 1.6 billion Muslims are nonviolent in the same way that the majority of any such large group of humans is generally nonviolent.  But with populations this large, even small percentages of individuals holding violent extremist views can represent huge numbers of people.
In a Gallup poll conducted between 2001 and 2007 (the largest in history at the time) examined tens of thousands of Muslims in 35 predominantly Muslim countries, using hour-long interviews to categorize individuals as either moderate or radical.
Whereas moderate Muslims may be quite religious, they were defined as nonviolent and non-radical for the study while radical Muslims expressed their support for suicide bombings and other violent actions.
The evidence from the study was used in the 2008 book Who Speaks for Islam? What a Billion Muslims Really Think by Professor of Islamic studies at Georgetown University, John Esposito and the Executive Director of the Gallup Center for Muslim Studies, Dalia Mogahed.
Although the interviews indicated that just over 93% of Muslims world-wide would classify themselves as moderate and pose no threat to modern, Western society, this left a 7% minority whose views did mark them as a threat.
According to the 2007 Gallup study for example, 7% of respondents stated that they believed that the 9/11 World Trade Center attacks were "completely justified". Since 2007, the Muslim population has grown from an estimated 1.3 to 1.6 billion, representing a 23% increase.
If the 2007 percentage of Muslims who held violent, radical beliefs were a constant at 7%, it would represent 112 million Muslims worldwide today who support the terrorist atrocities and despotic ambitions of ISIS.

Yet this is not the true number today either, since recent polls across several countries indicate that support for ISIS has grown and the percent of radical Muslims may be, globally, as high as 10% now.
A 2015 study by the Pew Research Center found that in Turkey, 8% of the population expresses support for ISIS while in Pakistan it is 9% and Malaysia 11%. In Nigeria, despite the horrific atrocities committed by ISIS affiliate Boko Haram, support was at 14%, a number that represents 12.6 million Nigerians.
The Pew study found that 13% of Muslims worldwide supported al Qaeda in 2013, but experts believe this may have dropped to 10 or 11%. Though percentages vary by country, based on self-professed views on violent extremist beliefs, somewhere close to 160 million Muslims fall into the 'radical' category.
This is greater than the populations of Russia, Mexico or Japan and it is also 30 million greater than the combined populations of the UK and France.
Just as only 7-10% of Muslims could be described as radical, only a percentage of those who support violence will actually commit acts of violence, and this percentage is far harder to determine.
But in a worldwide population base of nearly 160 million Muslims who do believe in violence and terrorism, extremist groups like ISIS will have no shortage of fighters to recruit and even those radicals who do not commit violent acts directly may convert others or offer material support.
It must be stressed that support for violence does not directly correlate with devoutness and that regular mosque attendance, education levels and economic status are all poor indicators of violent, radical beliefs.
Surprisingly, the comprehensive Gallup study found that while 37% percent of radical Muslims are women, the profile of the average radical Muslim is a college educated male who is both financially well-off and tech-literate.
It may very well be true that the majority of Muslims is peaceful, yet the most reliable and comprehensive global polling data indicates that the size of the minority that holds violent extremist beliefs is staggeringly large.
In a world that is increasingly connected, those with a violent ideology stand out little from the majority while they are still able to influence and threaten billions.
The focus on ISIS is only masking the deeper-rooted problem throughout the world and creates the illusion that defeating ISIS will solve the radical Islamic threat.