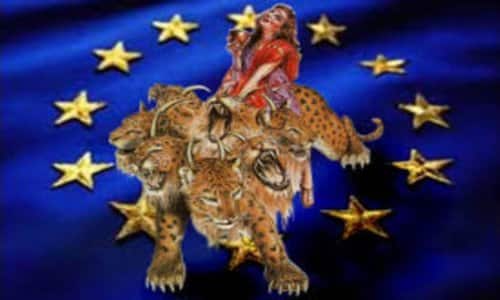 By PNW Staff June 25, 2016
Share this article:
Does the vote in the United Kingdom to leave the European Union have prophetic implications for the "Revived Roman Empire" described in the Books of Daniel and Revelation?

This is the question that will be on the mind of Bible Prophecy students for months to come as we watch what happens next in both the United Kingdom and the rest of Europe as more nations now threaten to follow the United Kingdom's lead.
The terms Swexit, Czexit and Frexit are already being used to describe other movements to pull out of the European Union. Front National leader Marine Le Pen has pledged to hold a French referendum if she emerges victorious in next year's presidential elections.
The Telegraph conducted a poll last month and found nearly half of voters in eight big EU nations want a vote on whether to remain. One third of the respondents said they would leave if they could.
German Chancellor Angela Merkel is leading the charge to hold the EU together and asking nations to remain calm before making any rash decisions.  But even she admitted in a statement, "There is no point beating about the bush: today is a watershed for Europe, it is a watershed for the European unification process."
French Prime Minister Manuel Valls has perhaps stated the ramifications for Europe best: "At stake is the breakup pure and simple of the union. Now is the time to invent another Europe."
Another Europe?
The potential for "another Europe" to emerge out of the current crisis has ramifications not only politically and economically but prophetically as well.  Surprisingly, even The Economist magazine recognized that this was an important factor for some Protestants voting to leave the Union in their article: "Protestants, leaving Europe is a matter of eschatology".
These evangelicals believed that remaining in the EU put them at risk of eventually joining the "The Beast's" final world empire.  Why did they believe this?
The Bible speaks of several different beasts. Each one is used symbolically to give insight into different aspects of the final world empire and it's leader, and when studied together give us a much better picture of what to expect in the Last Days.
Revelation 13 speaks of a beast in its first 7 verses. Another beast, ridden by a woman, is described in Revelation 17. Daniel 7 speaks of four separate beasts, with a reference to a "little horn" that appears during the time of the fourth beast. Revelation 13 also describes a second "two-horned beast," beginning in verse 11. These beastly images are also to be understood in the context of the giant image of a man composed of four separate metals in Daniel 2.
Relative to most of these descriptions, in describing this final world empire is the number 10; 10 toes, 10 heads and 10 horns. Each give us different understanding but all point to an alliance of 10 nations/leaders that will one day be controlled by the "little horn", the Antichrist.

A Revived Roman Empire of 10?
One of the most significant political and economic developments in our modern era was the EEC Treaty, the Treaty establishing the European Economic Community. It was signed in 1957 in, of all places, Rome!
In fact, there were two treaties, called, amazingly, "Treaties of Rome." One treaty established the European Atomic Energy Community, and the other established the European Economic Community, which later became the European Union.
With the development of the Common Market, many students of Bible prophecy thought this was the start of the 10 nation alliance described in the Book of Revelation.  However, most were surprised and confused when it continued to grow past 10, eventually reaching 28 nations.
To reconcile the idea of 10, some alternative ideas to solve this dilemma were put forward,  including the potential role of the 10-nation military alliance within the EU, which appeared in Europe in 1995, called the Western European Union.
Another idea floated by some leaders within Europe was the idea of an executive council of 10 to handle the growing size of its nation membership, who would represent the EU populace to an EU President.
Both ideas have some merit but seem unlikely anytime soon.  With the United Kingdom pulling out and others threatening to do the same, it gives rise to new speculations.
Will the EU reduce in size to 10 when all the new calls for referendums are completed?  Will a new union of nations from within the EU evolve, to also include countries from the Mediterranean area such as Israel, which was also part of the Roman Empire?  Will a new, powerful and charismatic leader emerge on the scene to lead what is left of the EU or perhaps create a new alliance of 10 nations that is not yet on the horizon?
We do not know how this will ultimately play out but we do know eventually this prophecy will come to pass.  Recent events represent serious change for this region and the world.  It is an area that the Bible has a lot to say about in the Last Days and we encourage you to become familiar with the different passages in Daniel and Revelation that reveal what the final world empire will look like.
Several prophecy experts recently came together to produce a new 10 hour DVD series called "Decoding The Future", that walks you through the Book of Revelation, chapter by chapter.  This resource will equip you with a better understanding of how these "beast" passages fit into the larger context of Revelation and the Bible itself.
Learn more about Decoding The Future here