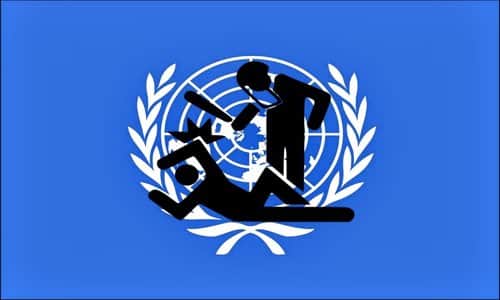 By PNW Staff July 07, 2016
Share this article:
On June 26, 2016 the American Mirror published a series of photos of MRAP armored vehicles with United Nations markings being carried on trucks down Interstate 81 in Virginia two days earlier.

The photos came with open speculation on why the UN would have vehicles, sealed against gas, on US soil. World Net Daily followed up with a more nuanced piece that indicated that the MRAPs were not intended for an imminent UN military deployment in the US.
Instead, they had been purchased from American companies, before being manufactured in York, PA and were headed overseas to be used by the UN in conflict areas. Crisis averted, right? Not quite.
Don't bother looking for blue helmeted soldiers at Walmart or white UN vehicles on the freeway this month, despite where Obama would prefer to deploy them.
There is no question that the UN is expanding its police powers or that Americans are footing the bill for it, just look at the increase from 2,000 to 13,000 UN "police officers" from 1999 to today with further increases requested, as reported in The New American.
Nor is there any doubt that the UN's deputy chief is asking for and receiving "the latest technology and access to intelligence" in addition to armored vehicles and thousands of new troops.
So far, these roughly 13,000 troops have been deployed to eighteen conflict zones designated as "peace missions", often to help fill a political power vacuum.
No such power vacuum exists in the United States where just the opposite is the primary threat to liberty.
In May, 2015 the trend of providing military equipment to domestic law enforcement had become so strong that President Obama issued an executive order to seize back some of the tanks provided free of charge to local law enforcement, but it is far too little and too late to dismantle the police state.
Massive amounts of military equipment taken together with a push for "internationalizing" American police procedure have begun to transform what used to be a local, community-based organization into the method of control for globalists.
The Strong Cities Network is one such example of promoting international policing in a surveillance state.
The Strong Cities Network is an agreement governed by a law-enforcement group whose laws and procedures will be applied in cities around the world, including, at first, some American cities such as New York, Atlanta, Denver and Minneapolis.
Law-enforcement tactics and measures will be adopted from international bodies, such as the police arm of the United Nations, not the local control that is the bedrock of the US system.

Those promoting this network never fail to remind us that it is intended to fight terrorism and violent extremism. Attorney General Lynch referred to establishing "a global community" in her statement unveiling the new program.
The lure of safety from terrorism is a powerful one, but it is important to understand that the "extremism" often referred to in the globalist speeches is that of resistance to their agenda.
In 2012, in a speech to the UN's General Assembly, President Obama declared that "the future must not belong to those who slander the prophet of Islam."
Opposition to Sharia Law and uncontrolled immigration are symptoms of a much larger problem that begins with shifting control from local police to State, then Federal, then a far-removed international council formed to decide that patriotism and liberty are extremist values.
Spiking food prices, disease, natural disaster, economic collapse or any of a number of other catalysts could push the country into 'extremism', providing justification enough.
Let us not forget the last time that Interpol came under the control of the Nazi, Reinhard Heydrich, and shifted its attention to such dangerous "extremists" that would try to help Jews escape the Holocaust.
Couple this with an omnipresent digital surveillance state that crosses borders and there is little need for foreign soldiers at all.
Don't be afraid of UN soldiers marching into town but instead of the slowly boiling pot that labels patriotism as dangerous extremism and seeks to replace local values and local control with a global police state based on foreign values.