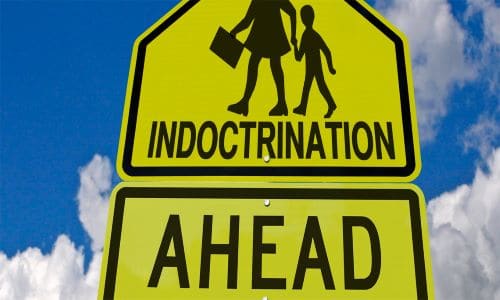 By Pete Hoekstra/Gatestone Institute October 27, 2021
Share this article:
The discontent at school board meetings across America is hard to miss. It is showing up in the news and social media feeds that people are watching and reading in their homes. Many people, however, are missing the major driver of this discontent -- the major transformation that the White House, National School Boards Association (NSBA) and others are trying to impose on our government schools.
The recent debate statements by Terry McAuliffe, the Democrats' Virginia gubernatorial candidate, and actions by Attorney General Merrick Garland following a letter from the NSBA clearly signal they believe that government schools are a tool to be used to indoctrinate children. They also believe the force of the federal government should be used to back them up.

They no longer to believe that a child's primary instructor in life is their parents or a close loved and that local control of schools is a central tenet of the American way of life. Instead, they believe it is the responsibility of the federal government to impose a certain way of thinking and what curriculum children are taught.
I take McAuliffe at his word that he really does not believe parents should have a role in developing or reviewing the curriculum that their children are taught in their local public schools. I take the NSBA at its word that it views parents who question local government school curriculum on sexuality, critical race theory, COVID mandates, and other items should be investigated as domestic terrorists. And I believe Garland really does think it is the role of the FBI to protect government schools from concerned parents.
When someone tells you what they are planning, or better yet shows you, you should take them seriously. And these individuals should be taken seriously. They are the same people who want to control local education from Washington, and kick parents out of the process, that say they want open borders, cradle-to-grave social programs for everyone, higher taxes, and a socialist America.
Far from meaningless campaign rhetoric, the left is doing everything and more that they promised in the run-up to the 2020 election. And now they are targeting our children.

I spent 18 years on the House Education and Labor Committee. Every expert who came in indicated that the most important thing in a child's learning was the presence of a caring adult in that child's life. We learned that schools most connected to their community were most likely to be successful. And that schools that focused on the basics of reading, writing and arithmetic achieved the best results.
Republicans and Democrats have been dismantling that paradigm for the last 50 years. In that time, local schools have shifted from safe zones where parents could assume that values taught at home would be reflected at their local government school. Instead, government schools are being forged into the latest tool used to indoctrinate our children with Marxist ideology. To them, parents are no longer an integral part of the learning process, parents have apparently become an impediment.
Hillary Clinton once famously said it takes a village to raise a child. It is hard to disagree with that statement on its face until you realize the village Clinton had in mind is the government and not the parents and families who make it up.

It is little wonder that McAuliffe, who is a key figure in the Clinton machine, sees things the same way when it comes to parents and education. They evidently believe it must protect our children from what it perceives as backward ideas such as clinging to "guns or religion" as then-presidential candidate Barack Obama said.
While the media may portray this as a battle about COVID mandates, American history, or the teaching of sexuality, those are just the scrimmages that we are witnessing. The real battle is for who the teacher will be in our children's lives -- parents and loving local individuals who know our children's names, or faceless government bureaucrats hell-bent on indoctrinating our children with their particular worldview. This is an attack and disruption of the nuclear family as prescribed by Black Lives Matter literature.
It is far past time to stop the controlling influence on education coming from Washington. McAuliffe, Garland, and the NSBA would have you believe that parents are domestic terrorists, but it is time for them to realize how their way of thinking poses a real threat to American rights.
Put me in the category of those that believe parents are the ones who should be raising our kids.
Originally published at Gatestone Institute - reposted with permission.