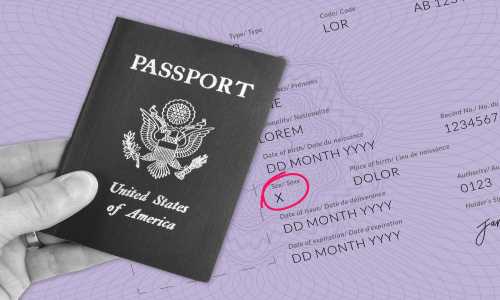 By Tony Perkins/Family Research Council November 01, 2021
Share this article:
Forget something on your trip... like your gender? No problem. Under new rules at the State Department (DOS), travelers don't have to know who they are -- or even what they are -- to get a passport.
Building on Joe Biden's anti-science lunacy, DOS leaders announced this week that they've processed their first genderless passport. It's historic, they said, slapping themselves on the back. Historically dangerous, yes. Historically shrewd? Hardly.
Jessica Stern, the "U.S. special envoy to advance LGBTQ rights," argued that it's time for people who don't identify as male or female to be affirmed in their "lived reality." But what about the global reality? What is the whole purpose of an official form of identity?

Pretending is perfectly fine if you're a kid playing make-believe, but this is the age of terrorism -- and a passport is the most dependable form of identification our country offers. How can the people working to keep us safe do their jobs when a suspect could be described as either a man or a woman -- or neither -- depending on how they feel?
And yet Stern's response -- like the rest of the woke DOS -- is that this about "dignity and respect." Amazingly, not one person in leadership seems to understand the obvious, which is that this isn't about sensitivity, it's about safety.
Florida officials voiced similar concerns back in 2002 when a Muslim woman insisted on wearing a burka in her driver's license photo. She lost her challenge in court over security concerns. Why? Because it's impossible to protect Americans when we let people hide their true identities.
Amazingly, this administration believes that national security isn't important as "self-discovery" -- which is just about the most dangerous form of political correctness there is. In a world where enemies like China, Iran, and North Korea are just waiting to exploit our wokeness, the president's gender lunacy is an open invitation to try.

In a little over a dozen countries -- Australia, Canada, Columbia, Pakistan, and India to name a few -- the "X" passport was already in place. Here at home, at least 20 states have been paving the road for this with driver's licenses that ignore biology too.
Starting early next year, Secretary Antony Blinken says, Americans won't even need a medical certificate to opt out of choosing a gender. Just let your feelings be your guide.
So much for "following the science." Of the 1,559 differences between men and women, this administration refuses to acknowledge a single one. That may be good for far-Left fundraising, but it's disastrous for a country in the bullseye of madmen.
Originally published at Family Research Council - reposted with permission.