Palestinians Point To Women Martyrs & Terrorists As Proof Of Equality 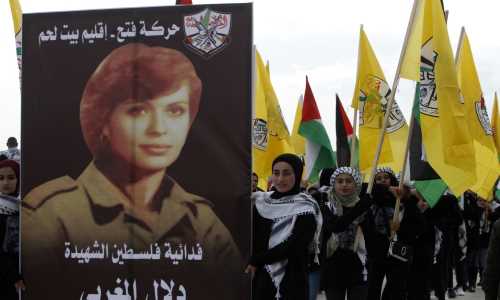 By Israel 365 November 08, 2021
Share this article:
Speaking on the occasion of national Palestinian Women's Day last week, PA Minister of Women's Affairs Amal Hamad highlighted "female Martyrs" and a mass murderer as proof that there is gender equality in Palestinian society.
Going back to the Arab Riots of 1929, the female minister first highlighted the fact that "the women were partners in the battle of resolve and defiance, and nine female Martyrs died." Then Minister Hamad singled out mass murderer Dalal Mughrabi who led the killing of 37 Israeli civilians, among them 12 children, in 1978.
As a third example, the minister mentioned the fact that "there are also female prisoners in the occupation's prisons." These examples served the minister as proof of gender equality in Palestinian society and that men and women are "going hand in hand":

Hamad also stressed Palestinian women's "participation in defending the land with all forms and means" - a term used by PA leaders to include using all types of violence, including deadly terror ‎against Israeli civilians such as stabbings and shootings, as well as throwing rocks and Molotov Cocktails.
The minister's focus on terrorists and women's equality in "the national struggle" is not surprising. Palestinian Media Watch has documented how terrorist murderer Dalal Mughrabi has been turned into one of the most revered role models for women.
Similar to the minister's emphasis, other prominent women of the PA focused on Palestinian women's equal status within the context of "the struggle." Among the roles Palestinian women have taken upon themselves and excelled in, PA Governor Laila Ghannam chose to stress their activities as terrorists attacking Israel: "self-sacrificing fighters, fighters, expelled, wounded, prisoners, and Martyrs":
It is intriguing - and worrisome - that both women above, who themselves have climbed to the top of the PA career ladder, becoming governors and ministers, chose to highlight Palestinian women's equal status as terrorists, and hardly mentioned any female achievements in any other field - not as lawyers, performers, engineers, artists, educators, or any other worthy professions.

While she did say that women's presence and participation in all sectors and on the decision making level is important, and also mentioned Palestinian women's achievements in medicine, PA Minister of Health Dr. Mai Al-Kaila also mostly stressed women's participation in violence and terror. She mentioned the Palestinian female prisoners and encouraged Palestinian women in general to continue engaging in violence and terror - packaging it in the PA euphemism "popular resistance":
Young Palestinian women look up to these female PA figures as role models and hearing praise for women who attacked Israelis from these personalities can only be understood as endorsement and encouragement of women choosing the path of violence and terror.
Originally published at Israel 365 News - reposted with permission.