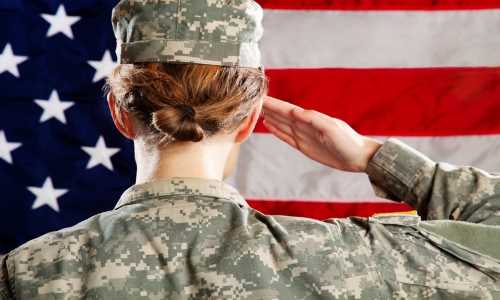 By Mary Beth Waddell/FRC November 20, 2021
Share this article:
As we prepare to gather around the Thanksgiving table with family and friends, many of us remember the old adage advising us not to talk about religion or politics. This year though, many families are likely to be discussing both for a myriad of reasons. One such topic of discussion is an issue that hits close to home. Namely, should our daughters be mandated to register for the draft and thus subject to being mandated into war?
The answer is no, they should not. This is an unnecessary, dangerous, and agenda-driven mandate on women that was added into the National Defense Authorization Act (NDAA) in committee. The Senate began consideration of the NDAA this week, and likely won't finish until they return after the Thanksgiving holiday.

Thursday, Sen. Roger Marshall (R-Kans.) rightly stated on "Washington Watch," "I'm all in favor of women volunteering to serve in the military, and there's just so many women that are doing an incredible job, but frankly, I don't want my daughter drafted or my future granddaughters drafted, either." This is exactly what will happen if this provision is not stopped.
If we were to employ the draft under this policy, women would be mandated into combat. No "modernization" of the Selective Service into more than a mechanism to rapidly expand our armed forces or replace combat troops, no need for roles that are designated "non-combat," and no congressional vote to employ the draft is going to change this fact or prevent women from being mandated into combat via the draft.
Removing the gendered language from the Selective Service to "expand registration to all Americans" is not about removing sex discrimination and securing equality for women. Women are free to volunteer to serve in our armed forces, including in combat roles.
Women have as much opportunity as men to serve their country with honor and distinction. They are a great asset to our military. However, mandating that women register for the draft is not a "glass ceiling" that needs to be broken. As Congresswoman Vicky Hartzler (R-Mo.) noted in an op-ed:
"Using women as a chess piece in a political "equality" argument is not only misguided but is insulting to our female population. Since the draft was last used in the 1970s, women have expanded their reach by impacting our nation in multiple ways, including as doctors, lawyers, engineers, and, yes, as valuable members of our military.

In fact, females comprise 17 percent of our current fighting force -- voluntarily -- and will continue to serve admirably. Women are valuable, precious, appreciated, and -- most importantly -- already equal. Claiming the inclusion of women in the draft would prove "equality" is ridiculous."
Moreover, requiring women to register for the draft has nothing to do with improving our military and national security. Numerically, it is unnecessary. If we needed to more than double our armed services to five million, that would only require an additional 1.4 percent of the male population to join either voluntarily or via conscription.
Physically, it is dangerous for women to be randomly conscripted into combat roles and would weaken our military. As noted by the Center for Military Readiness, the Ground Combat Element Integrated Task Force (GCEITF) ran a study with male participants of average capabilities and female participants who were above-average graduates of infantry training. They found that:
"In tasks resembling requirements of infantry, armor, and artillery units, all-male teams outperformed co-ed units in 69 percent of ground combat tasks."
"Sex-related physical differences negatively affected co-ed units' speed and effectiveness in simulated battle tasks, including marching under heavy loads, casualty evacuations, and marksmanship."
"Musculoskeletal injury rates were roughly double for females during the assessment."
"During research at the Infantry Training Battalion (ITB), enlisted females were injured at more than six-times the rate of their male counterparts."

This begs the question, "What is the push to require women to register for the draft really about?" As FRC President Tony Perkins observed on "Washington Watch," "This is about blurring the lines of gender. This is about further deconstructing western civilization... It's a much bigger issue here than simply the draft and selective service."
We have seen the onslaught of the agenda to remove the scientific, biological reality of sex in just about every corner of society only get worse in the past year. This agenda is detrimental to the rights, privacy, and safety of women and girls. It seeks to infiltrate any area it can, and our military is one of its next targets. This is literally a matter of life and death.
Fortunately, some lawmakers are standing up to oppose this mandate on women. Senators Josh Hawley (R-Mo.), James Inhofe (R-Okla.), and Mike Lee (R-Utah) all have amendments to strike this language, and at least one is expected to get a vote on the Senate floor after Thanksgiving.
This amendment is supported by others, including Sen. Cindy Hyde-Smith (R-Miss.), the ranking member of the subcommittee that funds the Selective Service System. She stated, "I have great admiration for the women who serve in our Armed Forces, and every opportunity to serve should be available to women. I do not, however, see any compelling reason to expand the Selective Service System."
Originally published at Family Research Council - reposted with permission.