A Great Way To Bless Israel: Help Raise Up Its Poor 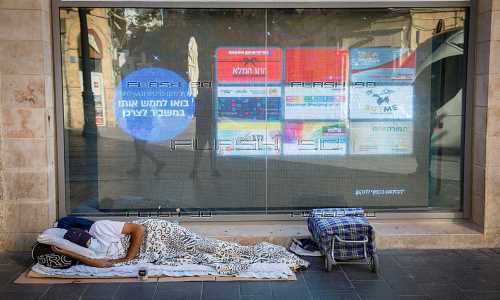 By Meir Panim December 06, 2021
Share this article:
While most of the news in Israel seems to be focused on the status of COVID-19, there's another pandemic that is less spoken about - poverty.
In 2021, over two million Israelis were living below the poverty line. More than 40,000 Holocaust Survivors could not afford food or basic care. Israel's borders remained closed due to the pandemic causing an 80% decrease and over $1.5 billion loss in the tourism industry.
To alleviate the situation, many organizations have been assisting those who have been affected by the economic downturn. One such organization fighting poverty in Israel, Meir Panim, has released some staggering data on what it took to keep up with the challenges of 2021, which included a pandemic and a war.

This year, Meir Panim served more than 1,000,000 meals, over 130,000 of which were for children, at its Restaurant-Style Soup Kitchens - a 15% increase from last year! To make this possible, their staff and volunteers spent 5,200 hours cooking and serving meals.
For those not able to make it to their restaurants, Meir Panim's Meal-on-Wheels Program saw the delivery of more than 100,000 meals to Israel's homebound. Over 80,000 food packages were delivered throughout the holidays - A 25% increase from last year. The result was more than 10,000 Holocaust Survivors being served with love and care throughout Israel.
Meir Panim believes strongly in assisting and encouraging those in need to maintain their homes as welcoming places for their families. It sponsors "Free Shuk Days," during which members of the community may come and take fruit and vegetables home to prepare meals. Additionally, in the last year alone, Meir Panim provided over $300,000 in prepaid shopping cards to low-income households so they could shop for their family's specific needs the way anyone else would.
But they do not stop at food. At its Neighborhood Youth Centers, over 120 at-risk teens received guidance and care every week, devoting more than 620 hours to programming and mentoring these teens. This included additional support and therapy to deal with the trauma of the recent war, for teenagers living near the Gaza border.
Despite it all, Meir Panim introduced five new programs this year:
- Free Shuk Day in its Tiberias branch
- A Russian Chef at its Holocaust Survivor Day Center to give Russian Survivors a nostalgic taste of home
- A Young Chefs Training Program to help at-risk teens develop new skill sets to open up career opportunities and help them break the cycle of poverty
- Graffiti Art Classes as therapy in its Neighborhood Youth Center
- Care packages for IDF soldiers during the Gaza war and COVID-19 lockdowns
"We don't know what's in store yet for 2022, but one thing we do know is that we're going to need help," said Mimi Rozmaryn, Meir Panim's director of Global Development.
Addressing the organization's donors over a call recently, Rozmaryn implored them to assist the foodbank saying: "Just like you were there for Israel's impoverished this year, we need you to stand with Meir Panim for this coming year."
Today, nearly 500,000 Israeli families live in poverty. Meir Panim does its best to ensure that each one can break the cycle of poverty in the coming year.
The Bible tells us that those who bless Israel will be blessed:
I will bless those who bless you (Genesis 12:3)
What better way to do that than to support Israeli food banks like Meir Panim?
To donate to Meir Panim and help Israel fight the war on poverty, click here.