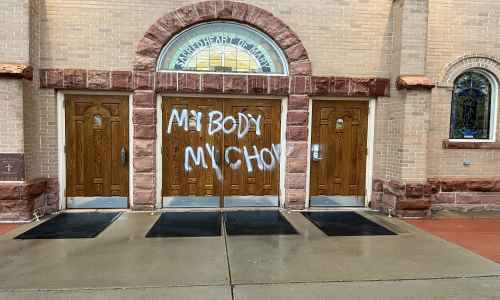 By Dan Heart/Family Research Council May 19, 2022
Share this article:
As the list of vandalized churches and pro-life organizations continues to grow due to pro-abortion extremist attacks in the wake of the leaked Dobbs Supreme Court decision, the silence from the U.S. Department of Justice (DOJ) is becoming increasingly deafening.
Normally, the DOJ is quick to rebuke and launch investigations into attacks that damage, deface, or destroy places of worship, since this type of criminal activity is specifically designated as a hate crime. But the Biden administration has made it clear that when it comes to abortion, any type of behavior, including threats against Supreme Court justices, is acceptable as long as it is in favor of killing unborn babies.
"It's been a little bit of a nod and a wink to some of these leftist groups who are continuing to call for disruption in church services and even calling for violence against people of faith, and this is just really disturbing," said Rep. Michael Cloud (R-Texas) on "Washington Watch."

As attacks against churches have mounted without a DOJ response, Cloud sent a letter on Wednesday to Attorney General Merrick Garland asking for an acknowledgment of the anti-Christian hate crimes taking place and to launch an investigation.
"This should be something we see a Department of Justice standing up and being clear and strong on," Cloud underscored. "The First Amendment makes clear what we understood to be an inalienable right, and that is the right to freely assemble and to practice our faith and to worship. And what we see is an attack against those things for political purposes.
And this is just one of the bedrocks of what this whole civilization is about. ... This is really coming down to be a clear battle between right and wrong. And we've got to begin to see it for what it really is and begin to address it."
Cloud went on to point out a disturbing pattern that is emerging in the DOJ when it comes to the equal application of the law, or lack thereof.
"What Americans expect ... out of a Department of Justice is that it's really supposed to be the place we go to that's not biased," he said. "There's equal application of the law. We remember all the statues and paintings of 'Justice' having the blindfold and the scales that we're trying to hold. ... That's the essence of what it means to live under the rule of law. And we're seeing that perverted in a very real way in our country right now and with this government. ... The American people are beginning to realize that there's two sets of justice in our country right now."

Even so, wherever there is persecution, there is also great opportunity. As FRC President Tony Perkins observed, pastors like Father Peter Harris of Holy Rosary Catholic Church in Houston, Texas are only being emboldened in the face of attacks. "This won't stop us; it propels us to continue to be witnesses for Christ in the world," Father Harris said. Perkins echoed his sentiments. "I think that is how we have to say, 'Look, if they want to target us for our believing that every human being is sacred because they're created in the image of God, then all right, so be it. But we're not going to go away. We're not going to go silent."
Congressman Cloud expanded on this theme by challenging believers to follow the example of the heroes found in Scripture.
"It's really ... an opportunity for people of faith to remember what belief is supposed to be all about," he said. "When you read through Hebrews 11, for example, what people call the Hall of Fame of Faith -- you see these heroes that, by faith, accomplished these great things ... And it talks about administering justice and winning battles and doing all these great and mighty and bold acts to bring about right and proper justice in the earth. And so, it's really a time for people of faith to understand that it's time for us to be bold. It's time for us to stand up and be strong and stand for what really is right."
Originally published at Family Research Council - reposted with permission.