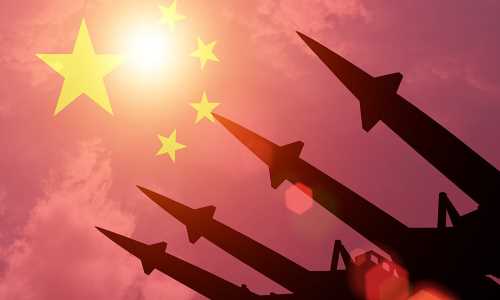 By Patty-Jane Geller/Daily Signal December 02, 2022
Share this article:
The head of the U.S. Strategic Command, Adm. Charles Richard, recently alerted the world that when it comes to deterrence against China, "the ship is slowly sinking."
That warning came on the heels of Chinese President Xi Jinping's call for "a strong system of strategic deterrence," a likely reference to Beijing's nuclear arsenal, at the recent 20th Chinese Communist Party Congress.
Richard's and Xi's comments confirm what we have been learning about China's buildup of its nuclear forces that have the potential to match--or even overtake--those of the United States.
Historically, China has maintained a very small arsenal of nuclear weapons as part of a "minimum deterrence" strategy. In 2010, it had only about 50 nuclear missiles.
But not today.

Satellite imagery recently revealed that China is building more than 300 new missile silos that, if filled, would place its land-based nuclear force on track to exceed that of the U.S. The Pentagon predicts China will grow its nuclear weapons stockpile to 1,000 by the end of the decade, if not sooner. And it would be unwise to assume Beijing would stop there.
China is also developing advanced capabilities like a fractional orbital bombardment system that would enable a nuclear missile to orbit the globe before flying to its target on a hypersonic trajectory. Compared to traditional ballistic missiles, such a system would be difficult for the U.S. to detect and track.
Beijing's nukes aren't limited to strategic systems to threaten the homeland. Its medium- and intermediate-range missiles are also nuclear-capable and can threaten U.S. forces in the Indo-Pacific as well as our South Korean and Japanese allies. By comparison, the U.S. has no nuclear weapons based in the region.
China's nuclear expansion presents at least three serious implications for U.S. strategy and security:

First, a stronger nuclear force will allow China to take greater risks in its aggression. Take the scenario of a Chinese military effort to unify with Taiwan, for example.
Backed by nuclear missiles that can strike targets both in the region and on the U.S. homeland, China can become more confident in its ability to wage a war if it thinks its nuclear "backstop" provides an advantage.
Beijing could also learn a lesson from Russia's war of aggression against Ukraine and threaten the U.S. with nuclear weapons should the U.S. come to Taiwan's defense, as Russian President Vladimir Putin has been doing since starting his war.
Second, China may become more tempted to actually use nuclear weapons. If Beijing thinks it has an advantage in its nuclear forces and doubts that the United States would respond to a nuclear strike, it is likelier to see nuclear weapons as a viable way to accomplish its objectives.
For example, given China's advantage in nuclear weapons based in the Indo-Pacific, Beijing could gamble that the U.S. would back down rather than respond to a limited nuclear strike.

China's advanced technologies, such as the fractional orbital bombardment system weapon, would also be suitable for a nuclear first strike because it can avoid U.S. early-warning systems until late in its flight. If the U.S. can't see an incoming missile, a surprise attack that cripples the U.S.' ability to respond becomes more feasible.
Third, China's growing nuclear forces could hinder the credibility of U.S. commitments to extend our nuclear umbrella over our allies. As China improves its ability to threaten the U.S., it could perceive that the United States would be less willing to come to the defense of an ally in the region--to trade Los Angeles for Taipei, Seoul, or Tokyo.
And if our allies think the U.S. wouldn't come to their defense, they might resort to developing nuclear weapons of their own. Such an outcome would damage U.S. commitments to nonproliferation and risk greater instability in the region.
To avoid the worst of these outcomes, the United States needs to prioritize the strengthening of its own nuclear forces. That effort entails both continuing to modernize existing capabilities while enhancing the number and types of U.S. nuclear capabilities required to address the growing Chinese threat.
As nuclear weapons pose the only existential threat to the United States, we must be up to the challenge.
Originally published at The Daily Signal - reposted with permission.