12 Signs The World Is Running Out Of Normal 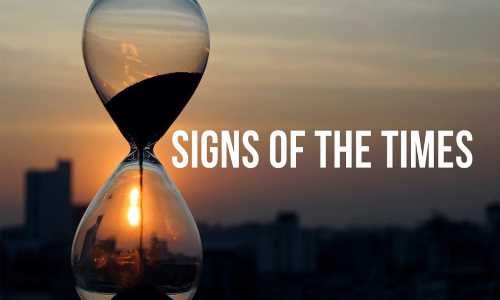 By Jonathan Brentner/jonathanbrentner.com December 02, 2022
Share this article:
Many people say that today is no different than any other time in history. "Sure, things look bad now, but this was also the case during World Wars I and II. Things have a way of working out so that things eventually return to some semblance of normal."
I understand why many question Jesus' soon return given the fact that it's been two thousand years since He promised to return.
In spite of the long wait, I'm convinced that Jesus' appearing is imminent because of the myriad of signs telling us that the Tribulation period is right on our doorstep.
I have compiled a list of 12 signs that tell us we are rapidly running out of normal.
If you are weary of waiting and long for the day when you will meet Jesus in the air, I am writing to encourage you; He's coming soon.
If you doubt that the Rapture will happen anytime soon, please take some time to review the following points:

1. ISRAEL'S MIRACULOUS REBIRTH AS A NATION
Did you know that Isaac Newton predicted that Israel would reappear as a nation? Based on his in-depth study of the books of Daniel and Revelation, he made that startling prediction over 250 years before it happened.
Newton correctly recognized that the fulfillment of biblical end times prophecies requires Israel's renewed existence. He also wrote that Israel would build a third temple once it became a nation.
On May 14, 1948, Israel miraculously became a nation again. The amazing rebirth of Israel fulfilled the words of Isaiah 66:8, which predicted that it would happen in a "day." Only God could resurrect a nation that had not existed for two-thousand years, supernaturally protect it amid countless wars, and bring it to a place of prosperity such as Israel enjoys today.
Did I mention that only God could do such a thing?
Israel's remarkable rebirth makes today different than any time previous to May 1948.
2. THIRD TEMPLE FEVER
Scripture tells us that the antichrist will defile a still future Jewish temple (Daniel 9:27; Matthew 24:15; 2 Thessalonians 2:3-4). In a recent article, The Biblical Necessity of a Third Jewish Temple, I demonstrate why the building of the third Jewish temple is a necessity for the fulfillment of biblical prophecy.
If we can trust the words of Scripture, there must be a third temple in Jerusalem by the midpoint of the coming seven-year Tribulation. That's when the Bible says the antichrist will desecrate it. Do we see evidence today that this will happen? Absolutely!
Just ten years ago, few people could have imagined today's passion in Israel for the building of their temple. Did you catch the celebration in Jerusalem when the five perfect red heifers arrived there from Texas? The Law requires one perfect red heifer for the purification of the temple and its priests.
The Temple Institute in Jerusalem has spent over thirty years researching and preparing furnishings for the third temple. They are currently training Levites to serve as priests in it.
The Israeli government is planning infrastructure for the coming temple, which includes a train that will run from the Ben Gurion Airport to the temple mount as they expect a great many visitors will want to visit the new temple. Israel plans to complete this rail system in April of 2023.
This alone makes 2022-2023 far, far different.

3. KICKING AND READY
In October, I wrote Globalism, War, Economic Turmoil, Devaluing Human Life -- The Day of The Lord Is Looming. In it, I provided evidence for just how close the world is to the conditions described in Revelation 6:1-8. These verses describe what's commonly referred to as the "four riders of the Apocalypse." They are kicking in their stall, ready to start their trek across the planet.
Revelation 6:8 says that the death toll from the chaos caused by these riders will total one-fourth of the world's population, which today would be two billion people.
World events today demonstrate just how easily the seal judgments could result in such a high death toll.
4. DIGITAL CURRENCY
If people can buy and sell goods on a cash basis, it would be impossible for the antichrist to control commerce in the way that Revelation 13:16-18 predicts.
The fulfillment of this prophecy requires the elimination of cash, and that is precisely what we see in our world.
The New York Federal Reserve in the U.S. recently began a twelve-week pilot program evaluating the use of a digital dollar using credit card companies and global banks. Leo Hohmann, a blogger, author, and investigative reporter, wrote this about the coming digital currency:
"I believe the new Central Bank Digital Currency, or CBDCs, will make their debut in 2023. And this digital currency will tie in directly with the digital health certificates on people's cellphones in what will become a personal dossier on every individual, tracking and monitoring their movements and behaviors."
The normality of using cash for purchases is slipping away and with it any privacy regarding our finances. The digital currency will enable governments to monitor how we spend our money and soon after that, they will control it.
Both India and China are rapidly moving toward a digital currency.
5. DIGITAL HEALTH PASSPORTS
At the November 2022 meeting of G20 nations in Indonesia, leaders of the largest economies in the world agreed to work together to implement a "digital health passport" that will begin by tracking everyone's vaccine status and expand from there.
This is also an absolute necessity for what the antichrist has planned for the latter half of the Tribulation. His system must instantly recognize whether one truly has his mark on them, and it will.
Below is the path that elite powerbrokers of our world have laid out for the future:
Eliminate cash through a worldwide digital currency
Combine one's online identity for banking with a digital health passport
Monitor all spending, which is simple with the coming Central Bank Digital Currency
Reward or punish people based on their spending habits
Totally control all spending
Implement what we refer to as the mark of the beast (Revelation 13)
We already see many of these things in China.