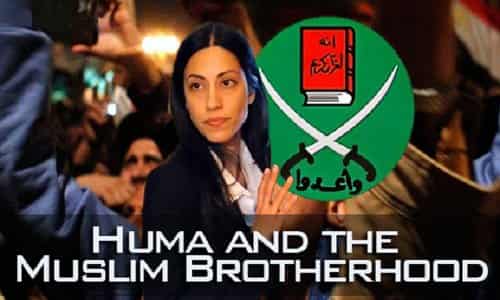 By Michael Snyder - End of The America Dream Blog August 24, 2016
Share this article:
Huma Abedin worked for Hillary Clinton when she was a U.S. Senator, when she was Secretary of State, and at this moment Abedin currently serves as her top campaign aide. If Clinton wins the election in November, it seems virtually a certainty that Abedin will become the White House chief of staff. She is already one of the most powerful women in America, and yet the vast majority of Americans have absolutely no idea who she is.

Well, it turns out that she worked at a publication run by her mother known as "the Journal of Muslim Minority Affairs" for more than a decade as an assistant editor. While Huma Abedin worked there, the journal regularly published articles that promoted radical Islamic causes and that opposed the rights of women.
In fact, Abedin's mother edited a book that was published in 1999 "that justifies the barbaric practice of female genital mutilation under Islamic law". If you know anything about that insidious practice, then you already know that it is one of the most horrific things being done to women around the globe today.
Not only that, but one article that was published while Abedin worked there actually blamed the United States for 9/11. The following comes from the New York Post...
Huma continued to work for her mother's journal through 2008. She is listed as "assistant editor" on the masthead of the 2002 issue in which her mother suggested the US was doomed to be attacked on 9/11 because of "sanctions" it leveled against Iraq and other "injustices" allegedly heaped on the Muslim world. Here is an excerpt:
"The spiral of violence having continued unabated worldwide, and widely seen to be allowed to continue, was building up intense anger and hostility within the pressure cooker that was kept on a vigorous flame while the lid was weighted down with various kinds of injustices and sanctions . . . It was a time bomb that had to explode and explode it did on September 11, changing in its wake the life and times of the very community and the people it aimed to serve."
Needless to say, the Clinton campaign is not commenting on any of this.
For many years, there has been much speculation about the nature of the relationship between Hillary Clinton and Huma Abedin. And to this day, many of those questions remain unanswered (at least publicly). What we do know is that Hillary feels extremely close to Huma and trusts her implicitly.
But should she?
Huma Abedin has been accused of being a "Saudi spy", and there are claims that her family has had ties to the Muslim Brotherhood. And without a doubt, her mother holds to a form of radical Islam that should be antithetical to everything that America is supposed to stand for.
Despite all of this, Abedin has a tremendous amount of support in both parties, and that includes top Republicans such as John McCain...
Many politicians, of both parties, strongly support Abedin including Republican Senator John McCain of Arizona.
'Put simply, Huma represents what is best about America: the daughter of immigrants, who has risen to the highest levels of our government on the basis of her substantial personal merit and her abiding commitment to the American ideals that she embodies so fully,' McCain said then. He added: 'I am proud to know Huma and to call her my friend.'

One of the controversies that has brought Abedin into the forefront in recent months was the email scandal that could have potentially derailed the Clinton campaign and ended Hillary's political career for good.
And now we are getting indications that the scandal may not be completely over. Earlier today, Bloomberg reported that there are approximately "15,000 previously undisclosed documents" which the FBI has recovered from Hillary's email servers which will soon be released to the public...
A federal judge has ordered the U.S. State Department to accelerate its review of almost 15,000 previously undisclosed documents recovered by the FBI from private e-mail servers used by Hillary Clinton while she was secretary of state.
Those documents are among tens of thousands of records the State Department is sifting through to cope with the demands of a Freedom of Information Act lawsuit filed by the conservative group Judicial Watch as the presidential race between Democrat Clinton and Republican Donald Trump enters a crucial phase.
So what will those emails show?
Could they potentially contain solid evidence that could lead to the prosecution of Hillary Clinton and many of her top aides?
I wouldn't hold your breath.
But if those documents are released in time, and if they contain some very damaging information, they could perhaps sway some key swing state voters at a critical point in the election.
If you follow my work regularly, you probably already know that I am very skeptical of those that believe that Donald Trump is going to win the election. The elite are desperate to keep Donald Trump out of the White House, and so they are throwing their support behind Hillary Clinton in a major way.
The Clinton campaign has far more money than the Trump campaign does, the mainstream media has completely sold out for Hillary, and hordes of establishment Republicans have already publicly committed to vote for her.
So at this moment, everything appears to be going her way.
But there is a long way to go until November, and one huge scandal could literally change everything in a single moment.