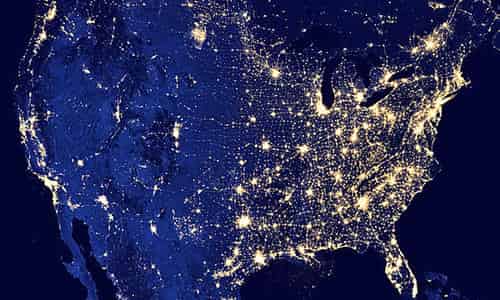 By PNW Staff August 29, 2016
Share this article:
Today we often take our electricity and communications for granted. The degree to which modern economies and modern societies rely upon both is staggering with everything from food production and delivery to pumping the fuel for transportation and the power for communications completely dependent on electricity.

The quaint belief that we would revert to the rustic 1800s in the event of a catastrophic interruption to our power grid is dangerously off the mark too. In the 1800s, we did not depend on thousand-plus mile food supply chains, electronic banking and the skill set of the average worker included tasks useful without electric power, unlike office workers, digital media specialists, truckers and thousands of other professions today.
While a localized and short-lived blackout can be dealt with as an emergency situation and supplies trucked in from outside, a sustained national blackout would pull society into a lawless dark ages closer to the year 1100 than 1810, accompanied by mass starvation in a society suddenly unable either to produce or distribute sufficient food.
As unsettling as a potential grid failure may be, the fact that reliable electric power has simply always been there makes the issue all too easy for the public, and the political class, to ignore.
Delta Airlines offered a small glimpse of the effects of a localized power outage, cause still unknown, when a blackout at its central offices in Atlanta, Georgia caused all of its computers across the globe to go offline on August 8th. All Delta planes were grounded for six hours and passengers delayed for much longer as flights began to back up.
Economic crisis has plunged Venezuela into rolling blackouts across wide areas of the country in the past two years and, in several Venezuelan states, electricity is being rationed to just a few hours per day when it is available at all.  Food spoils, hospitals go dark, and communications are silenced. But could worse happen in the United States?
Venezuela is far from a developed country at this point and if comparisons are to be made, they only serve to highlight the devastating effects of mismanagement and neglect. Developed as the US may be, however, a 2014 report from the International Business Times found that "aging infrastructure and a lack of investment to modernize the grid" has resulting in the startling fact that the United States experiences more blackouts than any other developed nation.
Working from Federal data, the report found that the US now experiences 285% more blackouts than it did in 1984 when data collection began.
The electric grid is actually an interconnected network of three majors grids in the United States: the Western Interconnection, Eastern Interconnection and the Texas Interconnection. A plant failure or spike in demand localized in one section of the Eastern Interconnection will automatically trigger dynamic load balancing within that grid zone but if the entire grid requires more power, the system is set up to draw power from the other two interconnection zones.
This allows demand to be efficiently balanced throughout the system but it also allows certain types of failures to cascade throughout vast geographic areas under the right conditions.
There are three major threats to the US electric grid today: a solar flare, a manmade electromagnetic pulse and sabotage. A solar flare able to generate an EMP would be amplified by the length of the electrical system, overloading transformers and all forms of electronics on an unprecedented scale.
A manmade EMP, like those generated from a nuclear blast, would have a similar effect of overloading circuitry in millions of pieces of electronics of a large area. But it is cyber-warfare that now a serious threat, as well.

The 2016 election cycle has brought Russian hacking of the Democratic Party into the headlines, but these accusations seem relatively benign next to recent uses of computer viruses as cyber-weapons to destroy industrial machinery and shut down national infrastructure.
Perhaps the first use of a "logic bomb" occurred when the United States infiltrated a Canadian software company that designed gas pipeline pressure controls for the Soviet Union. In 1982, months after installation, the faulty code triggered an explosion in Siberia that was visible from space.
In 2010, the US used the Stuxnet computer virus to target, infiltrate and destroy the logic controllers manufactured by Siemens on the centrifuges of the Natanz nuclear plant in Iran. But with the interconnected nature of power grids, the effects promise to be far more devastating, as Russia demonstrated in Ukraine less than nine months ago.
On December 23rd, 2015, the Prykarpattyaoblenergo power distribution station in Ukraine was hit by a carefully coordinated cyber-attack that was months in the making. The technicians lost control of their cursors as they watched hackers open breakers and take circuit after circuit offline, plunging 230,000 residents into darkness.
The hackers took backup power of the stations offline, plunging the electrical workers into darkness too, and worse yet, they even rewrote the low-level firmware that controls the electrical transformers. The attack had come after months of careful infiltration and planning by a dedicated team of elite cyber-warfare specialists and the result was devastating.
Even months later, technicians struggled to regain full capacity in the electrical grid due to the overwriting of firmware. With Ukrainian moves to nationalize power companies, it is possible that the powerful and Putin-connected Russian oligarchs who own large parts of Ukraine's infrastructure were sending a message: we can shut down the system anytime we want.
In the United States, the Federal Energy Regulatory Commission issued a recent report stating that "all it would take to plunge the entire nation into darkness for more than a year would be to knock out a transformer manufacturer and just 9 of our 55,000 electrical substations on a really hot summer day".
A combination of cyber-warfare and physical attacks could easily cripple the United States' overburdened system, the report found.
Considering the recent escalation in aggressive cyber-attacks on the West from China, North Korea, Syria, Iran and Russia, the danger has never been more real. Even the generator systems  themselves have been shown to be vulnerable to cyber-attacks. The Aurora Generator Test demonstrated a destructive cyber-attack using viruses to force a generator to rapidly switch on and  off until it physically destroyed itself.
Cyber-warfare has become the battleground of the future but the effects move far beyond cyberspace when planes are grounded, the lights go out and hundreds of electrical substations and generators are destroyed.
With the billions of dollars and thousands of hackers that nations are pouring into offensive cyber-weapons, the electrical grid is has become an even more-inviting target.  We may be only one light switch away from a radically different world that few of us are prepared for.