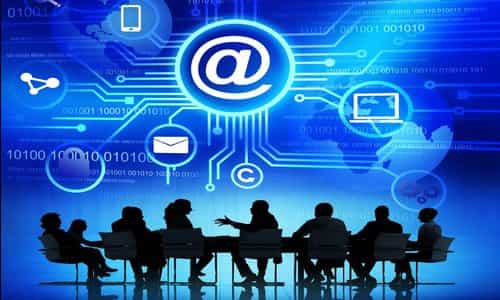 By Judith Bergman/Gatestone Institute August 30, 2016
Share this article:
Very soon, on October 1, 2016, much of the internet's governance will shift from the US National Telecommunications and Information Administration (NTIA) authority to a nonprofit multi-stakeholder entity, the Internet Corporation for Assigned Names and Numbers, also known by its acronym ICANN.

Until now, NTIA has been responsible for key internet domain name functions, such as the coordination of the DNS (Domain Name System) root, IP addresses, and other internet protocol resources. But in March 2014, the U.S. announced its plan to let its contract with ICANN to operate key domain name functions expire in September 2015, passing the oversight of the agency to a global governance model. The expiration was subsequently delayed until October 1, 2016.
According to the NTIA's press release at the time,
"NTIA's responsibility includes the procedural role of administering changes to the authoritative root zone file  the database containing the lists of names and addresses of all top-level domains  as well as serving as the historic steward of the DNS.
NTIA currently contracts with ICANN to carry out the Internet Assigned Numbers Authority (IANA) functions and has a Cooperative Agreement with Verisign under which it performs related root zone management functions. Transitioning NTIA out of its role marks the final phase of the privatization of the DNS as outlined by the U.S. Government in 1997".
According to the NTIA, from the inception of ICANN, the U.S. government and internet stakeholders envisioned that the U.S. role in the IANA functions would be temporary. The Commerce Department's June 10, 1998 Statement of Policy stated that the U.S. government "is committed to a transition that will allow the private sector to take leadership for DNS management." The official reason, therefore, is that
"ICANN as an organization has matured and taken steps in recent years to improve its accountability and transparency and its technical competence. At the same time, international support continues to grow for the multi-stakeholder model of Internet governance as evidenced by the continued success of the Internet Governance Forum and the resilient stewardship of the various Internet institutions".
The Obama Administration says that the transition will have no practical effects on the internet's functioning or its users, and even considers the move necessary in order to maintain international support for the internet and to prevent a fracturing of its governance.
Oh really?
While the transition may appear ostensibly "technical", the absence of the United States in overseeing the governance of the internet could spell the end of the current era of free speech on the internet, as well as free enterprise.
This is not merely wild speculation; it is evident in the statements that several governments, who are less than enchanted with the concept of freedom of speech, have made in recent years regarding the governance of the internet.
Some of these statements have come to light in the preparatory work of the United Nations World Summit on Information Society, known today as WSIS+10 -- a process that began in 2003 with the Geneva Declaration of Principles and that continues to this day.
Purportedly, the purpose of the process is a "commitment to build a people-centred, inclusive and development-oriented Information Society, where everyone can create, access, utilize and share information and knowledge" (section A.1), but already in section B.1 it becomes clear that the UN, run by a majority of authoritarian governments, wants a decisive role for governments in internet governance:
"Governments, as well as private sector, civil society and the United Nations and other international organizations have an important role and responsibility in the development of the Information Society and, as appropriate, in decision-making processes. Building a people-centred Information Society is a joint effort which requires cooperation and partnership among all stakeholders".
The UN, in the form of International Telecommunication Union (ITU), has already tried in vain to wrestle control of the internet from ICANN, but where the ITU failed, WSIS+10 may succeed with the new "global governance" ICANN, unshielded from the protection of the US.
The urge of various governments to control the internet is evidently there. If anything, this was clear from the submissions for the December 2015 WSIS+10 UN General Assembly High Level Meeting.
The written submission of the Group of 77 plus China -- a coalition, dating from 1964, of developing countries that now includes 134 nations -- stated that, "The management of the Internet involves both technical and public-policy issues and ... the overall authority for Internet related public policy issues is the sovereign right of States."

China's individual submission was even more interesting. It stated that,
"The multi-stakeholder governance model that brings together governments, the private sector and non-governmental organizations would be respected... This model should not be lopsided, and any tendency to place sole emphasis on the role of businesses and non-governmental organizations while marginalizing governments should be avoided.
The roles and responsibilities of national governments in regard to regulation and security of the network should be upheld. It is necessary to ensure that United Nations plays a facilitating role in setting up international public policies pertaining to the Internet. We should work on the internationalization of Internet Corporation for Assigned Names and Numbers".
When China says that ICANN should be internationalized, it hardly has in mind an increased role for non-governmental organizations.
Russia did not even pay lip service to the multi-stakeholder governance model but cut straight to the point:
"We consider it necessary to consecutively increase the role of governments in the Internet governance, with strengthening the activity of the International Telecommunication Union (ITU) in this field, as well as with support of the UNESCO activity in the development of ethical aspects of Internet use..."
"Ethical aspects of Internet use"?
Saudi Arabia, in its submission, also emphasized, that a priority for the WSIS+10 should be, "actualization of enhanced cooperation to enable governments... to carry out their roles and responsibilities in international public policy issues pertaining to the internet".
According to the Wall Street Journal, the Obama Administration -- as well as many in the high-tech community -- regards the long-planned move as necessary to maintain international support for the internet and prevent a fracturing of its governance -- a claim critics may find dubious.
The U.S. government's role "has long been a source of irritation to foreign governments," according to the NTIA. One look at many foreign governments and it is easy to see why. The NTIA claims that, "These calls for replacing the multi-stakeholder model with a multilateral, government-run approach will only grow louder if the U.S. government fails to complete the transition". Is that a threat?
But what guarantees are there that internet governance will not eventually end up in the hands of those very governments, seeing as they are all very eager to gain control of it? None.
In fact, those who claim to care about a free and uncensored internet, unbridled by government and international state organizations, should take a close look at the proposals for the plan for ICANN that the different stakeholders, including governments, came to agree on in March 2016 in Marrakech.
According to this plan, the Governmental Advisory Committee (GAC), a decisional participant in ICANN, will -- subject to certain limitations -- be able to participate in decision-making on budgets, board member removals, and other matters of ICANN corporate governance.
This is new and represents a major shift, which should concern those who care about internet freedom. Even if this plan is discarded for some reason, it shows how eagerly governments are pushing for control in internet matters. That observation alone should serve as a warning to those who take at face value the U.S. administration's declarations that nothing will change.
The decision to transfer authority to ICANN has met with resistance in the U.S. Congress, and a coalition of more than two dozen civil society groups and activists are even calling on Congress to sue the Obama Administration -- perhaps at least to postpone the date until more Americans are aware of the plan. It is not too late.
Originally published at Gatestone Institute - Reposted with permission.