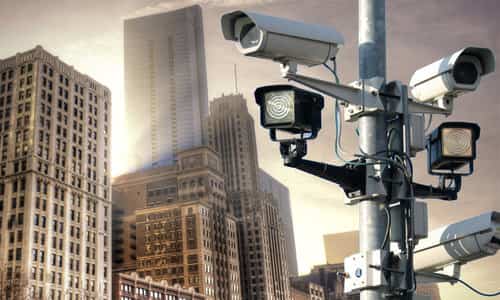 By PNW Staff September 07, 2016
Share this article:
Most people now carry a smartphone in their pockets and other smart devices such as smart watches, smart TV's and smart cars are growing increasingly common. The "smart" concept that defines hundreds of consumer devices is now coming to cities around the world. The wonderfully euphemistic term "smart" refers to the ability of a device or system to connect to a network and operate autonomously.

A smart TV can learn someone's favorite programs and then record them for watching later, all without human intervention. In what has come to be called the "Internet of things" or IoT, every conceivable device from kitchen appliances to light bulbs is receiving Internet connection. Of course it wasn't long before the endless possibilities for surveillance and control of this level connection were realized by those in government.
Cities are problematic from a planning perspective. Communications, transportation, zoning, commerce, utilities, waste management and a hundred other issues require coordination in dense urban centers. Cities such as Moscow, London, Beijing and Bogotá are famous for their traffic jams while Delhi suffers from waste management problems and New York City struggles with an antiquated communications infrastructure.
From a city dweller's perspective, the result is a chaotic, dirty and crime filled zone that may offer better work opportunities. Yet for a government intent on the control of a population, the age-old anonymity of city life offers its own challenges. With ten million faces in the crowd, how are the police to know which are guilty of dissent? The answer to all of these problems of modern living and illusory freedom is the absolute control the smart city offers to governments around the world.
Several municipalities around the world are being converted into smart cities as the communications, policing, transportation and other services become integrated. In other cases, new cities are being built from the ground up with this in mind, such as South Korea's Songdo.
In every case, the concept is the same: centralize and control every aspect of city life. Every smart phone and car is tracked in real time, every corner is watched by connected CCTV cameras, every transaction is logged and all of the information flows through a central computer. London has been an early adopter with its 422,000 CCTV cameras, or one for every 14 people.
When GPS isn't used for phone tracking, signal receivers can do the job to within just a few meters as Russia demonstrated during the Olympics, and as Forest City Commercial Management showed recently in shopping malls in California and Virginia. Shoppers' phones track their movement, e. g. logging which stores they enter and for exactly how long and cross reference this to purchase patterns in order to build complete profiles, all with "implied consent."
Not to be outdone by the millions of CCTV cameras of the British, China has been pouring increasingly more resources into "internal security", which accounted for $25.6 billion per year of its national budget in 2015.
Once again, the goal is population control through smart cities that connect a vast system of surveillance cameras with the ability to monitor cell phone locations and even to record and analyze calls and text messages. Even with China's reported 2 million Internet censors employed by the government, real time monitoring of billions of pieces of data per day is impossible.
Luckily for Chinese despots, recent advances in computing power (China now has the top two fastest super computers) allow for artificial intelligence to listen to calls, read texts, watch security cameras, follow transaction history and flag any behavior in a smart system that is being called "precrime" by some.
While South Korea is constructing its own smart city of Songdo from the ground up to link every aspect of a city dweller's life, Singapore too has adopted the smart city idea on the scale of a country by calling it a "smart nation".
The island nation is proud now of the fact that the government is carefully integrating mass surveillance, utilities, traffic, education, policing, communications and every other aspect of life. According the Wall Street Journal, the government has already boasted of "using citizens' smartphones to measure the bumpiness of bus rides, which could indicate road maintenance requirements."
In the United States, the White House announced its new Smart Cities Initiative to speed up the conversion of traditional cities to these modern control zones in which communications, utilities and traffic will be connected.

Privacy advocates balked after iPhone users were shocked to find out in 2010 that their iPhones had logged their location data and then uploaded it as easily-captured plain text whenever they docked their phones. Android smart phone users didn't have much time to gloat, however, because it was only one year later when a large scandal broke with the revelation that a data collection program from Carrier IQ had been installed on all cell phones by AT&T, Sprint and T-Mobile (Verizon was not involved).
Beyond just the location data of the iPhone, Carrier IQ monitored texts, calls, websites visited, location data and other usage data. For the privacy minded who turned their GPS off, Carrier IQ secretly activated it just to report their location.
With this level of control, and through the power of integration, governments and corporations are working together to put a camera, microphone and tracking device in the pocket of every American. Log all of the texts, listen to the calls, run it through a centralized system and 'Big Brother' isn't just watching, he's controlling every 'smart city citizen'.
For those who are still optimistic that the government has the best of intentions in its bid to connect and control every aspect of life in cities, there was the chilling announcement by retired General Michael Hayden that "we kill people based on metadata".
As former head of both the NSA and CIA, it is hard to ignore Hayden's warning of the dangers of using nothing more than call history to track and ultimately eliminate those the government considers enemies.
Add to cell phone metadata a network of security cameras, transaction history in a cash-less society, web search history, travel records and a thousand other data points central to the smart cities initiatives taking place across the country, and suddenly the world George Orwell imagined for Winston in Airstrip One springs to life.
Subjects of a smart city will be just that, subject to the whims and control of those at the top, bereft of privacy and herded into convenient boxes.