Millennials & The Church: What To Expect From The Next Generation 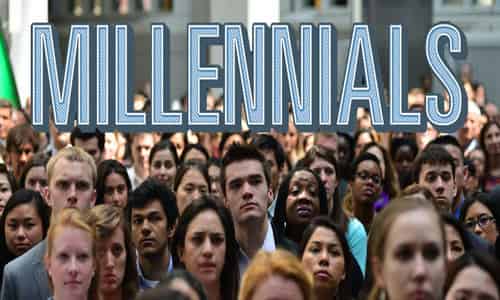 How well will this next generation lead? Tyler Francke in an article for relevantmagazine.com titled 'Six Reasons Millennial Christians Will Change Everything' believes that there is reason to be optimistic about the future and impact of Millennials for the following reasons:
1. They're Poised for Revival.
While it's true that roughly three in 10 Millennials (29 percent) claim no religious affiliation, 86 percent still profess belief in God, which doesn't really sound like an atheists' society.
2. They're More Individualistic.
According to New York Times columnist Ross Douthat, individualism is the one denominator underlying all of Millennial's generational trends. It's why they're optimistic about their personal futures but distrust society as a whole; why they're fleeing congregations Exodus-style while still maintaining private beliefs in high numbers; why they're addicted to selfies and sharing their latest exploits on Facebook.
3. They Speak Tech.
Pew describes Millennials as "digital natives"--the first generation that has not had to adapt to new technology and the Internet.
To reach one's audience with the truth of the Gospel or any other message, you have to speak their language. In 2014 and beyond, the language of our culture is increasingly becoming digitized. And Millennials are fluent.
4. They Question Everything.
You hear Millennials being called the "Why?" generation. It also reflects their tendency to be wary of institutions, political parties and even other people in general (less than 20 percent of Millennials agreed with the statement that "most people can be trusted").
Such radical skepticism may seem distasteful or inherently combative, until you remember the high premium Scripture places on shrewdness and "testing everything".
5. They Don't Toe the Party Line.
What's happening is they're going back to the words of Jesus, and realizing He didn't say a lot about exact political stances, but He did seem to emphasize things like loving others and serving the poor. So they're breaking rank from the polarizing two-party system and trying to find a third way instead.
6. They are Relentless Optimists.
Millennials tend to pretty upbeat about the future--both their own and that of the country as a whole. While only 32 percent said they're now earning as much as they need (far lower than the other generations), 53 percent said they will earn enough to meet their financial needs in the future (which is far higher).
Despite all these positive aspects and possibilities, there are certain areas of concern that Millennials need to watch out for or correct.
A year ago, John Reid wrote about 'Five Trends Christian Millennials Must Stop Doing'. In it, he listed the ways that many Christian Millennials are hurting their delivery of the Gospel to a world that desperately needs it:
1) Tolerance
Millennials have it in their minds that hating people's sin means hating the individual. This message is due in part to the liberal media but many young Christian Millennials sing the same tune. Instead of hating sin for the separation that it causes between us and God, they accept the sins of others in the name of "loving them for who they are."
But the problem with that is when we accept people for who they want to be, we neglect the people that Jesus made them to be. Jesus was the prime example of love, but never does He display an ounce of tolerance for sin.
2) Neglecting Theology
Consider the etymology of the word theology; theo- God, logy-study: the study of God. A trendy message among young Christians these days is "theology is good, but loving like Jesus is better."
The problem here is that the two are not mutually exclusive. Not only are they not mutually exclusive but rather they are dependent on each other. When theology is neglected Christian Millennials succumb to weak cultural ideas and defective scriptural interpretation such as "Jesus just said to love people, so why should we be opposed to gay marriage?" and "the Bible says not to judge, so don't tell me that I shouldn't be sleeping with my boyfriend!"
3) Separation from the World
We're quick to sing popular worship songs like "O to Be like You" and "Jesus, Be the Center Of My Life" but how practical do we allow this to be? We need to be Daniels, Esthers, and Joshuas: People of faith who love without ceasing and represent without compromise.
Also, I understand that nobody is perfect but it's one thing to sin and try to justify it while it's another to sin and repent; confessing and turning away from sin. Stop flirting with what you can get away with, and instead pursue the holiness that we have through Jesus Christ.
4) Bashing the Church
Christian Millennials are quick to throw the Church under the bus. Blogs are constantly cycling the internet like "3 reasons why I left my youth group" (and of course it's the youth group/youth pastor's fault, not the student who left).
Whereas the Church isn't perfect, it is much more effective to celebrate the good that the Church is doing than the negative, which a lot of times isn't even negative, it's rhetoric.
5) Declining Accountability
The same group of Christian Millennials will be the first to dish out accountability, usually in the form of Church-bashing, but will be the last to receive it. It'll be presented to them, but they won't accept it. If you identify as Christian, then you, oh beloved, fall within the God-appointed jurisdiction of judgment from your sibling in Christ.
To be clear, judgment should be understood and offered as corrective counsel in an attempt to hold one accountable. Thus, the objective is restoration.