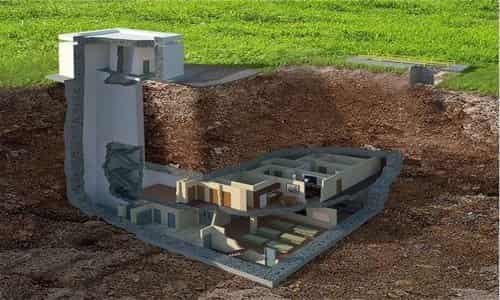 By Mac Slavo/SHTFplan.com October 03, 2016
Share this article:
It may well be that the end of the world is nigh.
But as the masses panic, riot, fight or line up for meager handouts, many of the elite will still be living the high life - albeit underground.
And there must be a reason why they are getting so prepared.

via Hollywood Reporter:
Given the increased frequency of terrorist bombings and mass shootings and an under-lying sense of havoc fed by divisive election politics, it's no surprise that home security is going over the top and hitting luxurious new heights.
Or, rather, new lows, as the average depth of a new breed of safe haven that occupies thousands of square feet is 10 feet under or more. Those who can afford to pull out all the stops for so-called self-preservation are doing so ...
Gary Lynch, GM at Rising S Bunkers, a Texas-based company that specializes in underground bunkers and services scores of Los Angeles residences, says that sales at the most upscale end of the market ... have increased 700 percent this year compared with 2015, and overall sales have risen 150 percent. "Any time there is a turbulent political landscape, we see a spike in our sales."
Adds Mike Peters, owner of Utah-based Ultimate Bunker, which builds high-end versions in California, Texas and Minnesota: "People are going for luxury to live underground because they see the future is going to be rough. Everyone I've talked to thinks we are doomed, no matter who is elected."
It's in the news on a daily basis. The potential for widespread disasters is huge and ranges from from economic meltdown, natural disaster, pandemic, civil unrest and martial law and also includes many other dark scenarios.
Most will be too overwhelmed to build and get ready ahead of time, and those who remain unprepared will be at the mercy of the worst of what falls upon this country.
Here's a look at some of the typical set-ups for luxury underground bunkers:
As the Hollywood Reporter noted:
Rising S Bunkers installed a 37-room, 9,000-square-foot complex in Napa Valley for an Academy Award-winning client that rang in at $10.28 million, with a bowling alley, sauna, jacuzzi, shooting range and an ultra-large home theater. Swimming pools, greenhouses, game rooms and gyms are other amenities offered.
This year, on another Napa Valley property, the company constructed a $9 million, 7,600-square-foot compound with horse stables and accommodations for 12, along with four escape tunnels leading to outlets on the estate, multiple hidden rooms -- in case "you let someone in whom you do not fully trust," says Lynch -- and an aboveground safe house "disguised as a horse barn." The company also is designing a $3 million bunker for "a major sports figure from Southern California."
The company's best-selling bunkers for L.A. are 10 by 50 feet, start at $112,000 and have their own power sources, water supplies and air-filtration systems: "These complexes accommodate families of four or five and are self-sustaining," says Roberson, adding: "You can pretty much put a palace underground anywhere there is physically enough room."

Those who are constructing fancy hideaways and elite retreats are sort of aware of the irony, as the primary motivation for building luxury underground bunkers and emergency shelters-in-style centers around the political turmoil and building unrest that has been triggered and stirred up by agenda that trickles down from the top and infects the masses.
Still, their back up plan could provide some inspiration even for those on a modest budget.
For the diligent, some adequate underground shelters could even be DIY projects, but the pros have it worked out pretty nice for those who can afford it.
On top of all the basic supplies and essentials, these bunkers typically include lots of room for entertainment and diversion, rooms for exercise and even swimming, bowling and mini-movie theaters.
It might almost be enough to forget you are stuck underground in a limited space. With underground greenhouses, they can even raise fresh food to supplement their storable eats.
The air is filtered, power and water supplies are in place, and many of the most powerful people in the world are bracing for the apocalypse (so to speak).
Are you?
Originally published by SHTFplan - reposted with permission.