Deutsche Bank Collapse: The Most Important Bank In Europe On The Brink 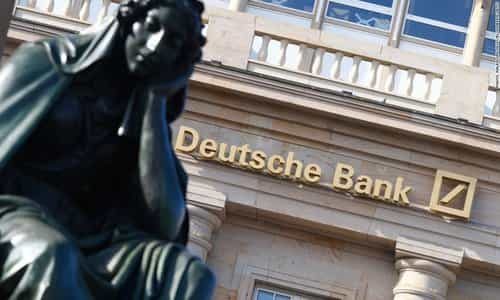 By Michael Snyder/Economic Collapse Blog October 03, 2016
Share this article:
The largest and most important bank in the largest and most important economy in Europe is imploding right in front of our eyes.  Deutsche Bank is the 11th biggest bank on the entire planet, and due to the enormous exposure to derivatives that it has, it has been called "the world's most dangerous bank".
Over the past year, I have repeatedly warned that Deutsche Bank is heading for disaster and is a likely candidate to be "the next Lehman Brothers".
On September 16th, the Wall Street Journal reported that the U.S. Department of Justice wanted 14 billion dollars from Deutsche Bank to settle a case related to the mis-handling of mortgage-backed securities during the last financial crisis.

As a result of that announcement, confidence in the bank has been greatly shaken, the stock price has fallen to record lows, and analysts are warning that Deutsche Bank may be facing a "liquidity event" unlike anything that we have seen since the collapse of Lehman Brothers back in 2008.
At one point on Friday, Deutsche Bank stock fell below the 10 euro mark for the first time ever before bouncing back a bit.  A completely unverified rumor that was spreading on Twitter that claimed that Deutsche Bank would settle with the Department of Justice for only 5.4 billion dollars was the reason for the bounce.
But the size of the fine is not really the issue now.  Shares of Deutsche Bank have fallen by more than half so far in 2016, and this latest episode seems to have been the final straw for the deeply troubled financial institution.  Old sources of liquidity are being cut off, and nobody wants to be the idiot that offers Deutsche Bank a new source of liquidity at this point.
As a result, Deutsche Bank is potentially facing a "liquidity event" on a scale that we have not seen since the financial crisis of 2008.  The following comes from Zero Hedge...
It is not solvency, or the lack of capital - a vague, synthetic, and usually quite arbitrary concept, determined by regulators - that kills a bank; it is - as Dick Fuld will tell anyone who bothers to listen - the loss of (access to) liquidity: cold, hard, fungible (something Jon Corzine knew all too well when he commingled and was caught) cash, that pushes a bank into its grave, usually quite rapidly: recall that it took Lehman just a few days for its stock to plunge from the high double digits to zero.
It is also liquidity, or rather concerns about it, that sent Deutsche Bank stock crashing to new all time lows earlier today: after all, the investing world already knew for nearly two weeks that its capitalization is insufficient.
As we reported earlier this week, it was a report by Citigroup, among many other, that found how badly undercapitalized the German lender is, noting that DB's "leverage ratio, at 3.4%, looks even worse relative to the 4.5% company target by 20183 and calculated that while he only models ¬2.9bn in litigation charges over 2H16-2017 - far less than the $14 billion settlement figure proposed by the DOJ - and includes a successful disposal of a 70% stake in Postbank at end-2017 for 0.4x book he still only reaches a CET 1 ratio of 11.6% by end-2018, meaning the bank would have a Tier 1 capital ¬3bn shortfall to the company target of 12.5%, and a leverage ratio of 3.9%, resulting in an ¬8bn shortfall to the target of 4.5%.
The more the stock price drops, the faster other financial institutions, investors and regular banking clients are going to want to pull their money out of Deutsche Bank.  And every time there is news about people pulling money out of the bank, that is just going to drive the stock price even lower.
In other words, Deutsche Bank may be entering a death spiral that may be impossible to stop without a government bailout, and the German government has already stated that there will be no bailout for Deutsche Bank.
Banking customers have a total of approximately 566 billion euros deposited with the bank, and even if a small fraction of those clients start demanding their money back it is going to cause a major, major crunch.
Deutsche Bank CEO John Cryan attempted to calm nerves on Friday by releasing a memo to employees that blamed "speculators" for the decline in the stock price...
Instead of doing what many have correctly suggested he should be doing, namely focusing on ways to raise more capital for the undercapitalized Deutsche Bank in order to stem the slow (at first) liquidity leak, first thing this morning CEO John Cryan issued another morale-boosting note to employees of Deustche Bank who have been watching their stock price crash to another record low, dipping under ¬10 in early trading for the first time ever.

In the memo the embattled CEO worryingly did what Dick Fuld and other chief executives did when they felt the situation slipping out of control, namely blaming evil "rumor-spreading" shorts, saying "our bank has become subject to speculation. Ongoing rumours are causing significant swings in our stock price. ... Trust is the foundation of banking. Some forces in the markets are currently trying to damage this trust."
Just as important, Cryan confirms the Bloomberg report that "a few of our hedge fund clients have reduced some activities with us. That is causing unjustified concerns."
As we explained last night, the concerns are very much justified if they spread to the biggest risk-factor for the German bank: its depositors, which collectively hold over ¬550 billion in liquidity-providing instruments.
One of the reasons why Deutsche Bank is considered to be so systemically "dangerous" is because it has 42 trillion euros worth of exposure to derivatives.  That is an amount of money that is 14 times larger than the GDP of the entire nation of Germany.
Some firms that were derivatives clients of the bank have already gotten spooked and have moved their business to other institutions.  It was this report from Bloomberg that really helped drive down the stock price of Deutsche Bank earlier this week...
The funds, a small subset of the more than 800 clients in the bank's hedge fund business, have shifted part of their listed derivatives holdings to other firms this week, according to an internal bank document seen by Bloomberg News.
Among them are Izzy Englander's $34 billion Millennium Partners, Chris Rokos's $4 billion Rokos Capital Management, and the $14 billion Capula Investment Management, said a person with knowledge of the situation who declined to be identified talking about confidential client matters.
"The issue here is now one of confidence," said Chris Wheeler, a financial analyst with Atlantic Equities LLP in London.
So what comes next?
Monday is a banking holiday for Germany, so we may not see anything major happen until Tuesday.
An announcement of a major reduction in the Department of Justice fine may buy Deutsche Bank some time, but any reprieve would likely only be temporary.
What appears to be more likely is the scenario that Jeffrey Gundlach is suggesting...
But Jeffrey Gundlach, chief executive of DoubleLine Capital, said investors betting that Berlin would not rescue Deutsche could find themselves nursing big losses.
'The market is going to push down Deutsche Bank until there is some recognition of support. They will get assistance, if need be,' said Gundlach, who oversees more than $100 billion at Los Angeles-based DoubleLine.
It will be very interesting to see how desperate things become before the German government finally gives in to the pressure.
The complete and total collapse of Deutsche Bank would be an event many times more significant for the global financial system than the collapse of Lehman Brothers was.
Global leaders simply cannot afford for such a thing to happen, but without serious intervention it appears that is precisely where we are heading.
Personally, I don't know exactly what will happen next, but it will be fascinating to watch.