Sanhedrin Rules Prophesied Return Of Jews To Israel Has Been Fulfilled! 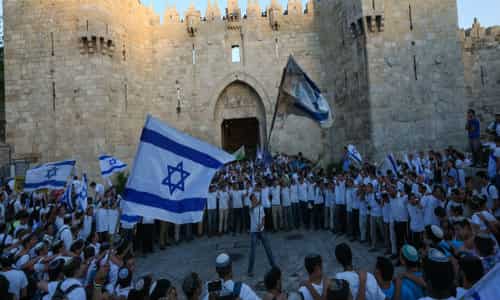 By Tom Olago October 05, 2016
Share this article:
The Jewish people are about to restore and commemorate an ordinance that has been dormant for about 2000 years - almost as far back as the days when Jesus Christ walked the earth. This New Year's celebration, or Rosh HaShanah, will include the recitation of the Jubilee year-counting mitzvah or Biblical commandment.
In attempting to elucidate the importance of this simple ceremony, Adam Eliyahu Berkowitz of Breaking Israel News quoted the following scripture: "And ye shall hallow the fiftieth year, and proclaim liberty throughout all the land unto all the inhabitants thereof: it shall be a Jubilee unto you" (Leviticus 25:10; The Israel Bible).
Berkowitz explained that counting the Jubilee is a simple mitzvah, reciting just a few lines, but performing this mitzvah is a declaration that the prophesied return of the Jews to Israel has been fulfilled, thereby establishing a basis for the rebuilding of the Jewish Temple.

Unbeknownst to all but a few witnesses, Berkowitz further clarified that as Rosh HaShanah ended eleven months ago, the nascent Sanhedrin concluded months of deliberation by ruling that certain conditions had been met requiring the Nation of Israel to begin counting the Jubilee cycle. Rabbi Avraham Dov Ben Shor recited the blessing and the 49-year cycle began again.
When Rosh HaShanah - the Jewish New Year - ends on the evening of Tuesday 4th October, it will be time for Jews to count the second year of the Jubilee cycle. The blessing and the count are as follows:
"Blessed art Thou, Lord our God, King of the Universe, Who sanctifies us in His commandments, and has commanded us to count the sabbaticals and the Jubilees".
This year is the second year of the first Jubilee, and the second year for the first sabbatical in the first Jubilee.
It is also worthy to note the central role that has been played by the Sanhedrin in these developments. According to Wikipedia.com, the Sanhedrin was an "assembly" or "council" of twenty-three to seventy-one men appointed in every city in the Land of Israel.
On October 13, 2004 the Sanhedrin, the highest religious tribunal of the Jewish state, was re-inaugurated by a group of rabbis in Tiberias after 1,600 years of absence.
In the Hebrew Bible, Moses and the Israelites were commanded by God to establish courts of judges who were given full authority over the people of Israel, who were commanded by God to obey every word the judges instructed and every law they established. Judges in ancient Israel were the religious leaders and Teachers of the nation of Israel.
The Sanhedrin is mentioned in the Gospels in relation to the trial of Jesus and several times in the Acts of the Apostles.
Specific conditions outlined in Jewish law had to be considered by the Sanhedrin before reinstating this mitzvah. Unlike most Torah commandments being observed today, which are incumbent on an individual, the Jubilee is a national mitzvah. Its observance is dependent upon most of the Jewish people being in the land of Israel.

To begin counting the Jubilee last year, the Sanhedrin, as a bet din (rabbinic court), ruled that the Jews have returned to inherit the land as a nation, and not just as individuals. This requires at least 600,000 Jews, equal to the number of Israelites that returned to Israel from Egypt under Joshua.
Israel has far exceeded the required number for quite some time. On the eve of this Jewish new year, the State of Israel has a population of 8.585 million, 172,000 more than the same time last year.
Jews make up close to three-quarters of the population at 6.4 million residents, while Israel's almost 1.8 million Arabs make up one-fifth of the population.  In the past year alone, 25,000 new Jewish immigrants arrived in Israel.
Rabbi Hillel Weiss, spokesman for the Sanhedrin, explained to Breaking Israel News, "The Sanhedrin ruled that we are now clearly in the prophesied third inheritance of the land, the first being by Joshua, the second after the Babylonian exile.
There are 5 mitzvot connected to the Jubilee: counting the Jubilee, letting free slaves, returning land, blowing the shofar, and forgiving debts," Rabbi Weiss explained. "We have reinstituted one: the counting of the Jubilee."
To signify the reinstitution of the Jubilee, and also to commemorate the Jubilee of Jerusalem, the Sanhedrin has issued a medallion. One side is engraved with an image of Solomon's Temple, flanked by two shofars, symbolizing the Jubilee.
The other side shows a lit seven-branched menorah, two cherubim, and a Hebrew inscription stating that the third inheritance of the land of Israel by the Jews has officially been declared. The Sanhedrin is selling the medallion and setting aside the proceeds for use in the Third Temple.
"Sale of this medallion will serve as the basis for the mitzvah of the half-shekel, which was collected from every Jewish male," Rabbi Hillel Weiss explained.
"As such, the money will go towards acquiring animals, grain, oil, and wine, for sacrificial purposes. It will also be used for building and maintaining the temple."