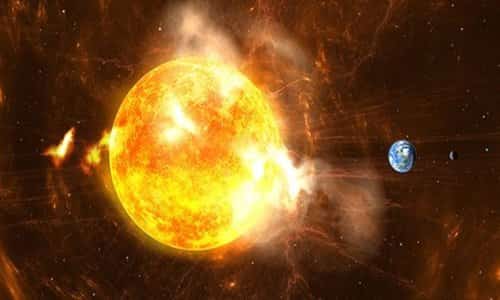 By Mac Slavo/SHTFplan.com October 17, 2016
Share this article:
Once considered a fringe conspiracy theory, it appears that the Obama administration is now actively preparing for a massive solar event that could wipe out life as we have come to know it.
Space weather events such as solar flares, solar energetic particles, and geomagnetic disturbances have long been believed to pose a significant threat to our technologically advanced society with the ability to not only affect global positioning satellites, but on-earth electronics that include the entire domestic (and global) power grid.
In the latest Executive Order signed by Barack Obama, the President calls for coordination between various government agencies including the Department of Defense and Department of Homeland security should a major "space weather event" come to pass.

Via WhiteHouse.Gov
Executive Order -- Coordinating Efforts to Prepare the Nation for Space Weather Events
By the authority vested in me as President by the Constitution and the laws of the United States of America, and to prepare the Nation for space weather events, it is hereby ordered as follows:
Section 1. Policy. Space weather events, in the form of solar flares, solar energetic particles, and geomagnetic disturbances, occur regularly, some with measurable effects on critical infrastructure systems and technologies, such as the Global Positioning System (GPS), satellite operations and communication, aviation, and the electrical power grid. Extreme space weather events -- those that could significantly degrade critical infrastructure -- could disable large portions of the electrical power grid, resulting in cascading failures that would affect key services such as water supply, healthcare, and transportation.
Space weather has the potential to simultaneously affect and disrupt health and safety across entire continents. Successfully preparing for space weather events is an all-of-nation endeavor that requires partnerships across governments, emergency managers, academia, the media, the insurance industry, non-profits, and the private sector.
Though often dismissed as nothing more than fear mongering, the threat of space weather events is not only possible, it is quite probable, as evidenced  by a massive solar flare which narrowly missed earth in 2012.
"The speed of this event was as fast or faster than anything that has been seen in the modern space age," said Baker.
...
Had it hit Earth, the July 2012 event likely would have created a technological disaster by short-circuiting satellites, power grids, ground communication equipment and even threatening the health of astronauts and aircraft crews.
...
We have proposed that the 2012 event be adopted as the best estimate of the worst case space weather scenario...
Is it possible that the Obama administration has scientific evidence supporting the fact that a space weather event is imminent? One Congresswoman thinks so, having claimed that there is a 100% chance of a crippling event.
The Executive Order signed by Obama on October 13, 2016 certainly suggests this may be the case:
It is the policy of the United States to prepare for space weather events to minimize the extent of economic loss and human hardship. The Federal Government must have
(1) the capability to predict and detect a space weather event,
(2) the plans and programs necessary to alert the public and private sectors to enable mitigating actions for an impending space weather event,
(3) the protection and mitigation plans, protocols, and standards required to reduce risks to critical infrastructure prior to and during a credible threat, and
(4) the ability to respond to and recover from the effects of space weather. Executive departments and agencies (agencies) must coordinate their efforts to prepare for the effects of space weather events.

Coupled with a previous Executive Doomsday Order signed by the President in March of 2012, the federal government now has the ability to take full control of all critical national infrastructure elements including food resources, energy resources, farms, health facilities, water resources and even the nation's workforce.
While millions of people have been preparing for the possibility of a catastrophic event by relocating to rural homesteads or farms, as well as stockpiling food, water, personal defense armaments and other essential supplies with the intention of utilizing these preparations if the worst happens, the latest executive order signed by President Obama on March 16, 2012 makes clear that in the event of a nationally deemed emergency all of these resources will fall under the authority of the United States government.
Recent projections from a secret Homeland Security report suggest that as many as 100 million Americans could be left without power should a powerful enough solar storm strike earth.
Another report paints an even more terrifying picture, indicating that without access to power via our grid, America would literally come to a standstill. Critical supplies including medicine, gas, and food would be undeliverable and within one year as many as 90% of Americans would be dead if the grid were not restored.
The problem, according to The Prepper's Blueprint author Tess Pennington is that over 90% of Americans are not only lacking any preparation for such a catastrophic scenario, but even if advance warning was sent to the population 12 hours ahead of time, it would simply be too late:
Unfortunately, that "12 hours" number doesn't tell the whole story. It's probably true that during a worst case scenario, it would take 12 hours for a solar storm to reach Earth. The only question is, can our scientific instruments detect a solar storm in that time frame?
Currently, our planet's early warning system consists of a satellite called DSCOVR, which launched in February of this year, and reached its destination between the Earth and the Sun last June. The satellite it replaced could give us a 15 minute warning, but the DSCOVR satellite isn't much of an improvement. It only gives us a 30-45 minute warning.
Pennington warns that a breakdown could happen very quickly and catch most people by surprise:
This is the point in this cycle where herds of people go to the grocery stores frantically grabbing supplies. Most grocery stores will not be able to meet the demand of the people's need for supplies, and many could go home empty handed.
Bracing for the disaster, the prepared and unprepared will be hoping for the best outcome. What many do not realize is the hardest part of this event is soon to be upon them. Within days, the descent into the breakdown will begin.
And it is this very descent into breakdown that will require an unprecedented government response and Obama's Doomsday Executive Order has given them the pretext to do so.
Do government officials know that a life-threatening solar event is becoming increasingly more probable?
Or is the Obama administration simply taking proactive steps to prepare?
Whatever the case, it is important to note that Americans are not prepared to deal with the aftermath of such a scenario.
Perhaps the actions being implemented on the federal level should be a wake up call to all Americans to prepare for disaster now.
Originally published at SHTFPlan.com - reposted with permission