The Poisoning Of A People - Palestinians Celebrate The Murder Of Jews 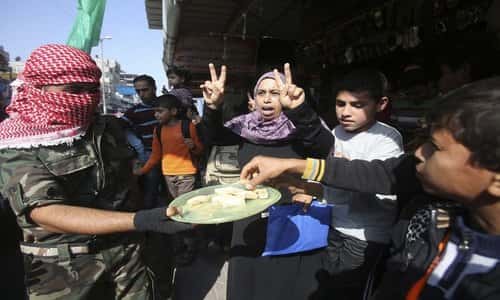 By Bassam Tawil/Gatestone Institute October 18, 2016
Share this article:
The family of Musbah Abu Sbeih say they are "very proud" of what their 40-year-old son did. So are many Palestinians representing all walks of life in Palestinian society.
Members of his family, including his parents and daughter, have appeared on too may TV stations to keep track of to commend Abu Sbeih.
They have even gone out onto the streets to hand out sweets in jubilation over the terror attack that he carried out in Jerusalem this week, which resulted in the death of a 60-year-old grandmother and a 29-year-old police officer.

Abu Sbeih is now the latest "hero" of many Palestinians, and not only by his family. He is being hailed as a "brave" man and a "hero" because he woke up in the morning, grabbed an M-16 assault rifle and set out to kill as many Jews as possible. His mission was "successful": he managed to shoot and kill two Jews before he himself was eliminated by policemen.
In a video that he left behind, Abu Sbeih claimed that he carried out the terror attack in response to visits to the Temple Mount by Jews. He claimed (falsely) that these visits were part of an Israeli scheme to destroy the Al-Aqsa Mosque on the Temple Mount.
This is the same false claim that was originally made by Hitler's friend, the Mufti of Jerusalem at the time, Haj Amin al-Husseini, to pretend there was a good excuse to attack the Jews; it is, as we see, still trotted out from time to time to "justify" killing Jews.
For the record, it is a lie -- like Palestinian claims that Israel is poisoning wells and water, which Palestinian Authority (PA) President Mahmoud Abbas was later, for lack of evidence, forced to retract.
Like many other Palestinians who have carried out, or attempted to carry out, terror attacks over the past year, Abu Sbeih was in fact simply heeding his leaders' call to stop Jews from "desecrating with their filthy feet" the Al-Aqsa Mosque. These calls have been coming for months not only from Hamas and Islamic jihad extremists, but also from "moderate" leaders such as Mahmoud Abbas and his Fatah faction.
These are the Palestinian leaders that European leaders appear to adore. These leaders in Europe, especially the French, keep prodding Israel to negotiate with groups that openly say they want no Israel at all, and that at best are uninterested in the truth -- whether about Israelis or Palestinians.
These European leaders would like Israel to keep pretending that the people with whom they are negotiating are actually acting in good faith. They seem to be trying to offer up to the Arabs, Muslims and the Organization of Islamic Cooperation (OIC), the destruction of Israel -- physical, diplomatic, economic, whatever they can get -- most likely as a bribe to stop Muslims from terrorizing them.
They will soon find out, however, that nothing they offer will be seen as adequate. The Europeans will soon find out, as the Persians, Turks, Greeks, North Africans and Eastern Europeans all did, that anything short of submission will just be pocketed as a down-payment on a far bigger mark.
These European leaders are happy to make us in the region, Muslims, Christians and Jews, live under a brutal Islamic dictatorship so long as -- in their woozy fantasy -- they will not have to. They are in for a shock.
Anyhow, in September 2015, Abbas used the very words from 1924 of Haj Amin al-Husseini, days before the current wave of stabbing, vehicular and shooting attacks began.
Since then, incitement over Jews' visits to the Temple Mount has been feeding what many Palestinians call the "Al-Quds Intifada." Abbas has promised that those who die while defending the Al-Aqsa Mosque will go straight to Heaven:
"We bless every drop of blood that has been spilled for Jerusalem, which is clean and pure blood, blood spilled for Allah, Allah willing. Every martyr will reach Paradise and everyone wounded will be rewarded by Allah."
To repeat: Abbas made this statement two weeks before the Palestinians unleashed a new wave of anti-Israel terrorism. We know, then, what spurred these attacks. They are the direct result of ongoing indoctrination and incitement against Israel that is being waged by Palestinians representing almost all Palestinian institutions and parties in the West Bank and Gaza Strip.
Abbas's words have clearly not fallen on deaf ears. This week's terror attack, which was carried out by Abu Sbeih, shows that the "Al-Quds Intifada" is anything but dying out. On the contrary, there is increased fear that the terror campaign may escalate from the use of knives, vehicles and stones to pistols and rifles.
Why is this scenario not far-fetched? Not only because of the motivation of the assailants, but also because of what appears to be widespread popular support among Palestinians for any attack on Israelis. Not a single Palestinian official has dared to come out against the Jerusalem terror attack.
And no ordinary Palestinian has dared to question the damage the attacks cause to the Palestinian public, especially those who are directly affected by Israeli retaliatory measures, such as travel restrictions.
Far from crying out against such butchery, many Palestinians have been heaping praise on the assailant.
Abu Sbeih, who as a permanent resident of Jerusalem carried an Israeli ID card and thus enjoyed all rights and privileges granted to Israeli citizens (with the exception of voting in general elections), did not come from an impoverished family at all.
Unlike his fellow Palestinians in the West Bank and Gaza Strip, he had free access to Israel and could go anywhere and anytime he wanted to, any place in Israel.

He and his family were able to wake up in the morning and drive to the Tel Aviv beach or eat in any restaurant in Israel without having to pass through Israeli checkpoints.
As holders of Israeli ID cards, they were even entitled to drive cars with Israeli plates, which is what Abu Sbeih took advantage of to carry out his attack in Jerusalem.
His family owns at least two homes in the city and are considered middle-class. Still, this did not stop Abu Sbeih from setting out on his deadly mission. Nor has it stopped his family members from celebrating the attack.
The first to express her "joy" and "pride" over the death of two Jews was Abu Sbeih's 15-year-old daughter, Eman. "Thank God, we are very happy and proud of my father," she said in an interview with a local Palestinian television station.
As in previous cases, some Palestinians, including the sister of Abu Sbeih, handed out sweets to "well-wishers" as a way of expressing their joy over the terror attack.
Hours after the attack, dozens of Palestinians gathered outside the family house, chanting slogans praising the assailant as a "hero" and calling on Hamas and other Palestinian groups to step up their attacks against Israel.
Such scenes are familiar in the Palestinian arena and are reminiscent of those that used to take place following the wave of suicide bombings against Israelis during the Second Intifada.
Several Palestinian factions lauded Abu Sbeih, calling for stepped up "armed operations against the Zionist enemy." Hamas leader Khaled Mashaal, who together with his family lives in the comfort of Qatar, was quick to phone the assailant's family and "congratulate" them on the "martyrdom" of their son.
"Our people and nation are proud of their heroism and courage displayed by your son, who sacrificed his life for the sake of Allah," Mashaal told Abu Sbeih's parents. He stressed that their son was a role model for Palestinians of his generation.
It was not clear whether the Hamas leader was making the phone call from his suite in one of Qatar's five-star hotels, or from his private gym.
Thus, for Hamas and many other Palestinians, a man who kills two Jews is the desired role model for young Palestinians. Accordingly, Abu Sbeih's supporters have taken to social media to praise him and urge Palestinians to follow suit. Because he managed to kill two Jews, Abu Sbeih is now being hailed on Twitter and Facebook as the "Lion of Al-Aqsa." As they see it, his was a noble act, an effort to save the mosque from being "defiled" with the "filthy feet" of Jews.
Support for Abu Sbeih seems to cross all Palestinian political factions. Even many belonging to President Abbas's Fatah faction came to the Abu Sbeih home in a show of solidarity with them.
Fatah has also declared Abu Sbeih a "martyr." A Palestinian who goes to meet with a Jew is strongly condemned and accused of seeking "normalization" with the enemy. But a Palestinian who carries a knife or rifle and sets out to kill Jews gains the stars of a "martyr" and wins nearly universal Palestinian praise.
This is the current mindset in Palestinian society, the fruit of decades of Palestinian incitement and delegitimization of Israel. This is the inevitable result -- as in the Spanish Inquisition, the French Revolution, the Turkish Genocide of the Armenians, Rwanda, Darfur, or Nazi Germany -- of the poisoning of a people.
Originally published at Gatestone Institute - reposted with permission.