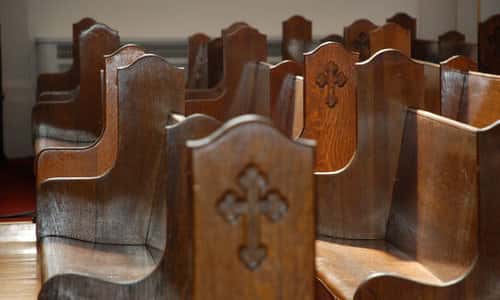 By Jack Minor January 25, 2016
Share this article:
Even as all of the major denominations seem to be oblivious to the ramifications of their downward slide toward apostasy on many long-held tenets of the Christian faith, the Anglican Church in England is attempting to reverse that trend by returning to a more conservative stance.

The Telegraph, a London newspaper, reported earlier this week that the Church of England, mother church of the Anglican Communion, has seen attendance at its services plunge to record lows. According to The Telegraph, official figures now place church attendance at a mere 1.4 percent of the population. It also noted that in 2014, the overall average attendance at Sunday services decreased by 22,000 to an average of just under 765,000.
The trends mirror similar figures among the major denominations that came about because of the Reformation. Presbyterian and Methodist denominations, for example, have embraced same-sex marriage along with the Episcopal church, the American brand of Anglicanism.
Whereas multiple reasons have been given for the decline, including a general trend towards secularism, Graham James, bishop of Norwich, noted that part of the problem is that they are not adding members at a rate sufficient to replace those lost due to death.
"We do not expect that trend to change imminently or immediately over the next few years due to demographics," Bishop James said. "We lose approximately 1% of our churchgoers to death each year. Given the age profile of the C of E, the next few years will continue to have downward pressure as people die or become housebound and unable to attend church."
Another problem is that, like other denominations, the Anglican Church has been riddled with liberalism for decades. For example, Bishop John Spong, writing in his 1991 book "Rescuing the Bible from Fundamentalism," said the apostle Paul was a "self-hating, repressed homosexual."
In 2006, the Episcopal convention elected Katherine Jefferts Schori, who is an ultra-liberal to be the denominations presiding bishop for a nine-year term. In her first sermon following her appointment, Schori referred to "our mother Jesus" and would later say that those who Believe in a literal interpretation of the bible are guilty of idolatry.
Over the centuries, the Anglican Church has gone through various stages of spiritual decline. In the 18th century, a system of thought known as Deism was introduced. Though not an official denomination, per se, it was instead the religious rationalist movement advocated by a number of authors of that period.
It taught that God was nothing more than what was known as the 'first cause' of events, meaning that He was similar to a clockmaker who, having made a clock, winds it up and leaves alone to run on its own.
This deity, as imagined by the Deists, revealed himself only in creation. Mans responsibility, however, is merely to recognize his being. It was termed 'natural religion' and, ironically, they claimed it to be true Christianity. This teaching eventually began creeping into the church.
As you can see this is not that far different from what we're seeing today, with movements towards vague 'spirituality' as opposed to sound Biblical doctrine. Then, as now, illicit drugs and alcohol abuse was widespread. It was estimate that every sixth house in London was a gin shop.

During this time, the sermons preached by the average Anglican preacher were described as "dull, duller and dullest," and as a result church attendance plummeted as people believed there was no need for it.
Yet, amidst all of this spiritual decay and apostasy, a renegade Anglican priest would arise by the name of George Whitefield. During his ministry, he would often preach to crowds numbering in the tens of thousands, including one instance of over 100,000 people in Scotland. As a result, revival broke out both in Britain and in America, heralding what became known in history as The Great Awakening.
Now, history seems to be repeating itself as a conservative movement has been taking control of the Anglican Church. Currently, the leadership is dominated by evangelicals, who tend to adopt a return to more traditional values, while laying aside many of the formalistic rituals that made up the church.
In order to reverse the spiritual malaise and decline the Church of England has embarked on an intense "reform and renewal" program.
Just this week, the Anglican Communion announced it was suspending the U.S. branch, the Episcopal Church, from key voting positions for the next three years. The suspension is primarily due to the Episcopal Churchs increasingly liberal stand in the issue of same-sex marriage where it is now ordaining homosexual priests.
"The traditional doctrine of the church in view of the teaching of Scripture, upholds marriage as between a man and a woman in faithful, lifelong union," the leaders of the Anglican Communion, which represents 44 national churches, said in a statement during a meeting in Canterbury. "The majority of those gathered reaffirm this teaching."
In addition, while Church of England membership is showing an overall decline, since the church began its "reform and renewal" drive, positive signs are already beginning to manifest themselves. Bishop James said, "In the past 12 months alone there are examples of growth and new churches across the country."
"In my own diocese the church of St Thomas Norwich has grown from 50 to 450 people in the past two years; in Bournemouth, St Swithins - a church which started in 2014 - now sees 500 people attending every week whilst in Birmingham St Lukes Gas Street is already attracting hundreds of young people since its beginning in 2015."
"There are many others like these and each is a sign of hope. Attendance statistics do not tell the whole story."
If the Anglican Church is successful with its return to more conservative and traditional Christianity, it will buck the normal course of events when a church or organization goes apostate. Very few that go down this path ever successfully return. More often than not, a split from the parent, corrupt organization is needed.
One can only hope and pray that they succeed.