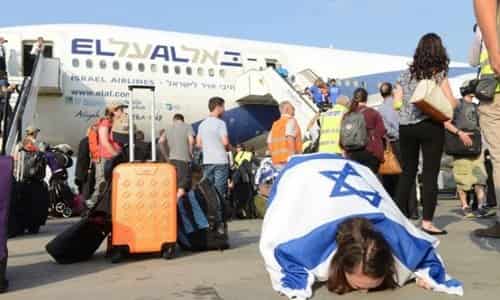 By Tom Olago November 14, 2016
Share this article:
A massive yet low-profile exodus of a specific group of people has been taking place over the centuries and continues to the present day.
The exodus has been from countries all over the world; their common destination the land of Israel.
It's commonly referred to as Aliyah - the return of Jews scattered across the world, and is considered a major fulfillment of end-time Bible prophecy.
Israel celebrated its first Aliyah Day with a ceremony in Jerusalem last week.
Earlier this year, the Aliyah Day law was passed to recognize the importance of immigration to Israel and its development as a multicultural society.
The law designated Aliyah Day as the seventh day of the Hebrew month of Heshvan, coinciding with the reading of the Torah portion, which describes the divine commandment directing Abraham to go to the land of Israel.

Immigrant Absorption Minister Sofa Landver, who immigrated to Israel 37 years ago, said she is "proud and excited that for the first time, Israel is marking a day commemorating immigration to Israel."
"All those immigrants, from the first wave of immigration to Israel to the fifth, from Operation Moses and Solomon to the new immigrants -- they are all composed of the ingathering of exiles called the state of Israel," she said.
Israel is a country of eight million citizens, 40 percent of whom were born outside of the country. Over three million people immigrated to the Jewish state since its inception in 1948, coming from every corner of the globe--from the US to Mozambique.
According to Reformjudaism.org, there have been five such major Aliyah waves so far:
1. The first wave, known as the "First Aliyah," took place prior to political Zionism, in the late 1800s. Most of these new immigrants came from Russia and Yemen, and set up towns.
2. The Second Aliyah, prior to World War I, was almost exclusively made up of Russian Jews, following pogroms and anti-Semitism in their country. Inspired by Socialism and Jewish nationalism, this group started the first kibbutz and revived the Hebrew language.
3. After World War I and until 1923, the Third Aliyah came to Israel. This group was also from Russia, but they arrived after the establishment of the British Mandate over Palestine and the Balfour Declaration and set about creating a sustainable Jewish agricultural economy by strengthening and building the kibbutz movement and its ancillary institutions.
4. The Fourth Aliyah, which took place over a short period of time from 1924 to 1929, was mostly made up of Jews seeking to escape anti-Semitism in Poland and Hungary. Many of these immigrants were made up of middle-class families who established small businesses and created a more rounded economy.
5. The Fifth Aliyah coincided with the rise of Nazism in Germany and extreme nationalism across Eastern Europe and included the largest number of immigrants to date - nearly one-quarter of a million Jews entered Mandate Palestine between 1929 and the beginning of World War II.
This group of immigrants included professionals, doctors, lawyers and artists. They created a thriving art and architecture scene, and with the establishment of the Port of Haifa, a thriving economy.
There have been other smaller pockets and waves of Aliyah since. One such wave was recorded by Wikipedia.org - the Jewish Aliyah from Ethiopia, or the immigration of ethnically and religiously Jewish Ethiopians (Falashas) to Israel. It began during the mid-1970s, during which the majority of the Beta Israel community emigrated to Israel.
Fast-forwarding to today - no doubt the pace of Aliyah has continued unabated. Pastor Enoch's blog (pastorenoch.com.au) three months back reported that 2015 saw the highest number of Jews making Aliyah in the past 12 years, with the numbers doubling since 2008.
France, Ukraine, and Russia are three countries leading the way in global Aliyah. Additional factors driving the pace of emigration rates have also been identified in these nations.
In France, rising anti-Semitism has been a catalyst for French Jews to undertake Aliyah.
The French Jewish community has also been the target of several terror attacks in recent years. A growing number of French Jews see the 'writing on the wall' and believe they have no future in France.
These fears have only been exacerbated by the recent refugee influx into France that has been comprised mainly of anti-Semitic applicants. In fact, a recent survey indicated that 43% of French Jews - in other words, 200,000 Jews - are currently considering making Aliyah.
The ongoing war in Ukraine has been another contributory element. Anti-Semitic tendencies have been reported to be on both sides of the conflict.
A top rebel leader on the pro-Russian side reportedly blamed the 'Jews of Ukraine' for masterminding the downfall of the previous pro-Russian government in Ukraine. Meanwhile, there are also concerns about neo-Nazi/fascist groups who have been taking part in the fighting on the Ukrainian side.
In 2015, Russia experienced a sudden 40% spike in Aliyah driven primarily by the financial crisis of 2015 that saw Russian wages drop by 8.5% and the value of the Russian Ruble cut in half compared to the US dollar.
Another motivating factor would be that Russia is home to half the world's Neo-Nazis, and just as in times past, the Russian bear could easily turn on its Jewish population.
Yemen too has yielded up her Jews to Israel. According to the Israeli Ministry of Foreign Affairs website, the final group of Yemenite Jewish immigrants landed in Israel Sunday, March 20 following a complex covert operation coordinated by the Jewish Agency for Israel, thus bringing the historic Yemenite Aliyah to a close.
Some 200 Jews have been secretly rescued from Yemen by the Jewish Agency in recent years, including several dozen in recent months, as attacks against the Jewish community have increased and the country has descended into civil war.
More than 51,000 Yemenite Jews have immigrated to Israel since the country's establishment in 1948. The majority of the community - nearly 50,000 individuals in total - was brought to Israel in Operation Magic Carpet in 1949 and 1950.
According to a recent Christiantoday.com publication by Florence Taylor, there are now just 50 Jews left in Yemen after the latest covert airlift operation.
Even American Jews are returning to Israel. Several years back, unitedwithisrael.org examined why this would be so, as they live in relative safety and comfort. For many American Jews, the answer is simple.

Israel is the Jewish homeland. It is the land promised to the descendants of Abraham in his covenant with God, the land that housed the holy temples, the land to which the Jews have been longing to return for 2,000 years...
It is clear that Jews in Israel are not only establishing an integral connection to their past, but also defining their future as the Jewish people. Many American Jews are making Aliyah to help lay the foundation for the current and future "history" of their nation.
Chinese Jews are also eagerly standing up to be counted as Israeli Jews. Algemeiner.com reported early April the case of five women who are among the few remaining traceable descendants of China's ancient Kaifeng Jewish community. They made Aliyah to Israel that week. The women plan to formally convert to Judaism and become Israeli citizens.
"Our ancestors are Jews...I have to be here... As a child, my parents and people around me always called me 'Jewish girl,' new immigrant Yue Ting, a 25-year-old primary school teacher, told NBC News. "I didn't understand the meaning of Jewish at that time."
"I know I am Jewish," said Yue. "To be Jewish, I have to go back to Israel...I've been waiting for this time for a long time."
So are some Indian Jews. In December of 2014, ibtimes.com reported that a small tribe of people from a remote corner of northeastern India claimed to be descendants of Jews and are seeking asylum in Israel.
In the Indian state of Manipur, which borders Myanmar (Burma) to the east and Bangladesh to the west, thousands of local people have either converted to Orthodox Judaism over the past few decades or claim they belong to a group called the Bnei Menashe, who believe they trace their ancestry to one of the Lost Tribes of Israel.
The Bnei Menashe - actually the Kuki-Mizo-Chin tribes of northeastern India - think they are descended from the Menasseh tribe, who departed Israel in the eighth century B.C. after the Assyrians invaded. Al-Jazeera estimates about 7,000 Bnei Menashe currently reside in India, while about 2,000 have already settled in Israel.
So what significance, if any should be attached to the persistent Aliyah drift? Pastor Enoch of pastorenoch.com.au weighed in on the prophetic angle of it all:
"The Bible predicts a great end time ingathering of the Jewish people from the four corners of the globe. This arguably started to take place at the beginning of the 19th Century as Jews began returning to Israel...
This return was not just from Babylon as in the days of Ezra, but rather a return that would bring Jews from virtually every country on the globe.... Life in Israel is not exactly easy either, but the God of Israel has promised to protect His returning people.
Jeremiah's comforting words foretell that "He who scattered Israel will gather him, and keep him as a shepherd does his flock" (Jer. 31:10 NKJV).