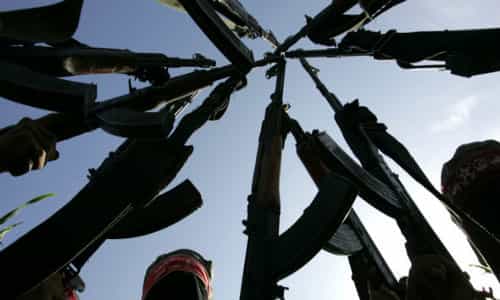 By Giulio Meotti/Gatestone Institute November 21, 2016
Share this article:
"There is a stereotype that young people from Europe who leave for Syria are victims of a society that does not accept them and does not offer them sufficient opportunities...
Another common stereotype in the debate in Belgium is that, despite research which refutes this, radicalization is still far too often misunderstood as a process resulting from failed integration...
I therefore dare say that the better young people are integrated, the greater the chance is that they radicalize. This hypothesis is supported by a lot of evidence."
That was the result of extremely important Dutch research, led by a group of academics at the Erasmus University in Rotterdam.
Terrorists seem to be models of successful integration: for instance, Mohammed Bouyeri, the Moroccan-Dutch terrorist who shot the filmmaker Theo van Gogh to death, then stabbed him and slit his throat in 2004. "He [Bouyeri] was a well-educated guy with good prospects," said Job Cohen, the Labor Party mayor of Amsterdam.

The Dutch research was followed by research from France, adding more evidence to the thesis that goes against the liberal belief that to defeat terrorism, Europe must invest in economic opportunities and social integration.
Dounia Bouzar, director of the Center for Prevention, Deradicalization and Individual Monitoring (CPDSI), a French organization dealing with Islamic radicalism, studied the cases of 160 families whose children had left France to fight in Syria. Two-thirds were members of the middle class.
These findings dismantle the myth of the proletariat of terror. According to a new World Bank report, "Islamic State's recruits are better educated than their fellow countrymen".
Poverty and deprivation are not, as John Kerry said, "the root cause of terrorism." Studying the profiles of 331 recruits from an Islamic State database, the World Bank found that 69% have at least a high school education, while a quarter of them graduated from college.
The vast majority of these terrorists had a job or profession before joining the Islamist organization. "The proportions of administrators but also of suicide fighters increase with education," according to the World Bank report. "Moreover, those offering to become suicide bombers ranked on average in the more educated group."
Less than 2% of the terrorists are illiterate. The study also points to the countries that supply ISIS with more recruits: Saudi Arabia, Tunisia, Morocco, Turkey and Egypt.
Examining the economic situation of these countries, researchers have discovered that "the richer the countries are the more likely will provide foreign recruits to the terrorist group."
Another report explained that "the poorest countries in the world don't have exceptional levels of terrorism".
Despite the evidence, a progressive mantra repeats that Islamic terrorism is the result of injustice, poverty, economic depression and social unrest. Nothing could be farther from the truth.
The thesis that poverty breeds terrorism is pervasive today in the West, from French economist Thomas Piketty to Pope Francis. It is probably so popular because it plays on Western collective guilt, seeking to rationalize what the West seems to have trouble accepting: that terrorists are not driven by inequality, but by hatred for Western civilization and the Judeo-Christian values of the West.
For Israel, this means: What are Jews doing on land that -- even though for 3,000 years it has been called Judea -- we think should be given to Palestinian terrorists? And these terrorists most likely wonder why they should negotiate, if instead they can be handed everything they want.
For the Nazis, the "inferior race" (the Jews) did not deserve to exist but must be gassed; for the Stalinists, the "enemies of the people" were not entitled to continue living, and had to die of forced labor and cold in the Gulag; for the Islamists, it is the West itself that does not deserve to exist and has to be blown up.
It is anti-Semitism, not poverty, that led the Palestinian Authority to name a school after Abu Daoud, mastermind of the massacre of Israeli athletes at the Munich Olympics.
The Paris bombings, the anniversary of which France will commemorate in a few days, was a blow unleashed by an ideology that does not seek to fight poverty, but to gain power through terror.
It is the same Islamist ideology that murdered the Charlie Hebdo journalists and the policemen on duty to protect them; that forced British writer Salman Rushdie into hiding for a decade; that slit the throat of Father Jacques Hamel; that butchered commuters in London, Brussels and Madrid; that assassinated hundreds of Israeli Jews on buses and restaurants; that killed 3,000 people in the United States on September 11; that assassinated Theo Van Gogh on an Amsterdam street for making a film; that committed mass rapes in Europe and massacres in the cities and deserts of Syria and Iraq; that blew up 132 children in Peshawar; and that regularly kills so many Nigerians that no one now pays any attention to it.
It is the Islamist ideology that drives terrorism, not poverty, corruption or despair. It is them, not us.
The whole history of political terror is marked by fanatics with advanced education who have declared war on their own societies. Khmer Rouge's Communist genocide in Cambodia came out from the classrooms of the Sorbonne in Paris, where their leader, Pol Pot, studied writings of European Communists.
The Red Brigades in Italy was the scheme of wealthy privileged boys and girls from the middle class. Between 1969 and 1985, terrorism in Italy killed 428 people. Fusako Shigenobu, the leader of the Japanese Red Army terrorist group, was a highly-educated specialist in literature.
Abimael Guzman, founder of the Shining Path in Peru, one of the most ruthless guerrilla groups in history, taught at the University of Ayacucho, where he conceived of a war against "the democracy of empty bellies." "Carlos the Jackal," the most infamous terrorist in the 1970s, was the son of one of the richest lawyers in Venezuela, Jose Altagracia Ramirez. Mikel Albizu Iriarte, a leader of the Basque ETA terrorists, came from a wealthy family in San Sebastián. Sabri al-Banna, the Palestinian terrorist known to the world as "Abu Nidal," was the son of a wealthy merchant born in Jaffa.
Some of the British terrorists who have joined the Islamic State come from wealthy families and attended the most prestigious schools in the UK.
Abdul Waheed Majid made the long journey from the English town of Crawley to Aleppo, Syria, where he blew himself up. Ahmed Omar Saeed Sheikh, the mastermind of the kidnapping and killing of the American journalist Daniel Pearl, graduated from the London School of Economics.

Kafeel Ahmed, who drove a jeep full of explosives into the Glasgow airport, had been president of the Islamic Society at Queen's University. Faisal Shahzad, the failed terrorist of Times Square in New York, was the son of a high official in the Pakistani military. Zacarias Moussaoui, the twentieth man of the 9/11 attacks, had a PhD in International Economics from the London's South Bank University.
Saajid Badat, who wanted to blow up a commercial flight, studied optometry at London University. Azahari Husin, the terrorist who prepared the bombs in Bali, studied at the University of Reading.
Britain's MI5 revealed that "two-thirds of the British suspects have a middle-class profile and those who want to become suicide bombers are often the most educated."
Most British terrorists also had a wife and children, debunking another myth, that of terrorists as social losers. Mohammad Sidique Khan, one of the suicide bombers of July 7, 2005, studied at Leeds Metropolitan University. Omar Khan Sharif had a scholarship at King's College before carrying out a suicide bombing on Tel Aviv's seafront promenade in 2003.
Sharif was not looking for economic redemption, but to slaughter as many Jews as possible.
Virtually all the heads of international terror groups are children of privilege, who led gilded lives before joining the terror ranks. 15 of the 19 suicide bombers of September 11 came from prominent Middle Eastern families. Mohammed Atta was the son of a lawyer in Cairo.
Ziad Jarrah, who crashed Flight 93 in Pennsylvania, belonged to one of the most affluent Lebanese families in Lebanon.
Nasra Hassan, who wrote an informed profile of Palestinian suicide bombers for The New Yorker, explained that, "of 250 suicide bombers, not one was illiterate, poor or depressed." The unemployed, it seems, are always the least likely to support terror attacks.
Europe and America gave everything to these terrorists: educational and employment opportunities, popular entertainment and sexual pleasures, salaries and welfare, and religious freedom.
These terrorists, such as the "underwear bomber," Umar Farouk Abulmutallab, the son of a banker, have not seen a day of poverty in their life.
Paris's terrorists rejected the secularist values of liberté, egalité, fraternité; British jihadists who bombed London and now fight for the Caliphate rejected multiculturalism; the Islamist who killed Theo van Gogh in Amsterdam repudiated Dutch relativism, and ISIS's soldier, Omar Mateen, who turned Orlando's Pulse Club into a slaughterhouse, said he wanted to purge it from what he perceived as libertine licentiousness and apparently his own homophilic wishes.
If the West does not understand the real source of this hatred, but instead indulges in false excuses such as poverty, it will not win this war being waged against us.
Originally published at Gatestone Institute - reposted with permission.