Syria Is Training Ground For Hezbollah's Next War With Israel

By PNW Staff December 08, 2016
Share this article:
Arab language media is reporting that fighter planes from the Israeli Defense Forces have attacked a Syrian military airport in Damascus as well as Hezbollah targets near the capital which killed and injured a number of fighters in the Shiite militia.
The moves come after Prime Minister Netanyahu previously had announced in April that Israel had struck Hezbollah targets in dozens of strikes to prevent the terrorist group from obtaining "game changing" chemical and advanced anti-aircraft weapons.
For those following the looming terrorist threat that now faces Israel, the strikes sound like foreshadowing of the next war on Israel from an increasingly well-armed and funded terrorist army.
Hezbollah, originally Lebanese and supported by the Shia regime in Iran, has been instrumental in turning the tide of the Syrian civil war in Assad's favor over the past year as its now battle-hardened fighters help government forces retake rebel-controlled cities and push back against the Islamic State.

Hezbollah's involvement in the Syrian government's offensive began in 2013 as the conflict entered a far more bloody phase of near total war.
It is estimated that Hezbollah has suffered casualties of 1,500 fighters, including some of its top military commanders and veterans from the 2006 war on Israel. At the same time, however, it has both swelled its ranks and gained invaluable combat experience, emerging as a far more capable fighting force.
Redoubled recruiting efforts and a call to arms against the Sunni Muslim Islamic State have resulted in a militant force of just under 50,000 with roughly half in full-time service to the cause.
Of those, a full 10,000 are believed to be currently deployed in Syria. Apart from ramping up its Lebanese membership, Hezbollah has created Syrian affiliate groups that it now directs, such as the National Ideological Resistance and the Al-Ridha Forces. At the same time that it has experienced an influx of green recruits,
Hezbollah has continued to train and cultivate elite units skilled in urban warfare, sharpshooting, improvised explosives and battlefield tactics. What is emerging is the largest and now most well-equipped stateless military force in the world.
When Hezbollah launched its rocket attacks on the civilian population of Israel in 2006, it had several thousand rockets equipped with rather crude guidance systems along with a few hundred anti-tank and anti-ship missiles.
Now, thanks to funding and access provided by the Tehran and Damascus, Hezbollah possesses between 70,000 and 90,000 rockets, to include long-range variants and a far greater store of anti-tank missiles, advanced Yakhont anti-ship missiles and the dreaded SA-8 and likely the SA-17 and SA-22 surface-to-air missiles.
In the next war, Hezbollah won't be blindly launching dozens of rockets per day into Israeli neighborhoods. No, it will be able to coordinate thousands of precision strikes calculated to cause mass-casualties and suffering within Israel.
Hezbollah, the so-called "Party of God" now even fields its own armored unit comprised of several dozen main battle tanks and armored vehicles. As for funding, Hezbollah has been receiving a reported $200 million per year from Iran, a number than is sure to rise with the lifting of sanctions under the nuclear deal.
Saudi Arabia provides $3 billion in aid to Lebanon, money that is also being siphoned off by Hezbollah which has become for Lebanon a "state within a state". Indeed, the past decade has seen the terrorist guerrilla force transform into a true army.
Though the Israeli Defense Force remains far stronger and Hezbollah's newly acquired tanks wouldn't last long against IDF air power, the rise of an increasingly well-equipped, well-funded and battle-hardened extremist fighting force that has pledged itself to the destruction of Israel cannot be ignored for long.
As a Hezbollah special-forces commander recently revealed to VOA News, "in some ways, Syria is a dress rehearsal for our next war with Israel." Just as Hezbollah will enter the next war as a proper fighting force, Israel has also learned from its mistakes in the previous conflict.

One of those mistakes according to military analysts was holding back it's firepower on Lebannon for fear of civilian casualities.  Hezbollah has purposely embedded itself ever deeper in the civilian population near the border to make sure civilian casualites make Israel look bad in the worldwide media.
To make sure Hezbollah knows their will be a price to be paid should they try anything, the Israeli military on Tuesday posted a map of southern Lebanon to Twitter, on which it marked Hezbollah positions, infrastructure and armaments along a section of the Israeli border.
The map details over 200 towns and villages which the organization has turned into its operations bases, and shows over 10,000 potential targets for Israeli strikes in the event of a new war with the terror group.
View image on Twitter 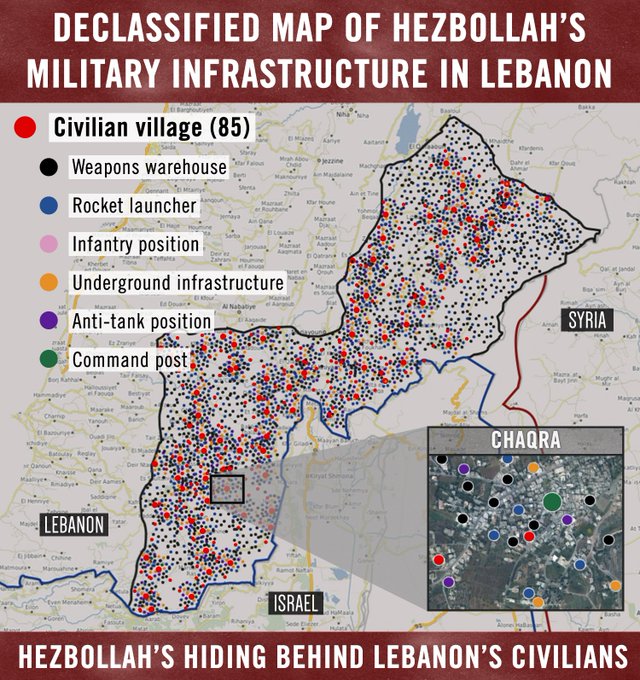 With Syrian government forces edging closer to victory against the rebels, it looks like Hezbollah may soon be ready to turn its violent ambitions on its long-time enemy, Israel.
With this latest Israeli attack on targets in Syria, both Hezbollah and Syria are itching for revenge and may not wait until their conflict with ISIS and the Syrian rebel groups are over.