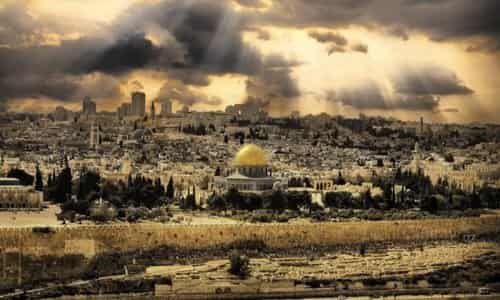 By Michael Brown/AskDrBrown.org December 20, 2016
Share this article:
There is no controversy like the controversy that surrounds the city of Jerusalem, the most divided city on the earth and the most coveted city on the earth.
The Bible predicted this more than 2,500 years ago, describing the day when Jerusalem would be a "a cup that brings dizziness to all the surrounding nations" (Zech. 12:2, NET), even declaring that one day, the whole would be in uproar over Jerusalem.
Stop and think about it for a moment.
Why does the whole world get so exercised over Jerusalem? Is there any other city on the planet that evokes such intense emotions and polar views?
And why does every nation put its embassies in the city that the host country identifies as its capital, except for the city of Jerusalem, identified as Israel's capital in 1950? Why do virtually all embassies remain in Tel Aviv?

There is something of spiritual significance to this ancient city that simply cannot be denied.
The Jerusalem Embassy Act of 1995, "passed by overwhelming bipartisan majority in both the House and Senate," states that "Jerusalem should be recognized as the capital of the State of Israel and the United States Embassy in Israel should be established in Jerusalem no later than May 31, 1999."
Then why didn't presidents Bush or Obama move the embassy? As explained by Rabbi Shraga Simmons, "since the congressional act allows the President to implement a waiver at six-month intervals, that's exactly what has happened every six months since 1995."
Now that Donald Trump has insisted that he will, in fact, relocate our embassy - in accordance with the 1995 act - the controversy is hitting the fan. In the words of Sheikh Ekrema Sabri, imam of the al-Aqsa Mosque in Jerusalem, moving the embassy would be as good as a "declaration of war."
Consider the opposition to Trump's appointee for Ambassador to Israel, David Friedman, a strong supporter of Israel who speaks of our embassy's imminent relocation.
As he said openly and proudly after his nomination, "I intend to work tirelessly to strengthen the unbreakable bond between our two countries and advance the cause of peace within the region, and look forward to doing this from the US embassy in Israel's eternal capital, Jerusalem."
According to a December 16 email from Rabbi Shmuley Boteach, known as "America's rabbi," Friedman is a "brilliant choice for Ambassador to Israel. One of America's most respected and accomplished attorneys, David is regarded in the highest esteem by the New York Jewish community as an exemplar of the American and Jewish virtues of education, erudition, philanthropy, and communal commitment."
He continued, "David has vast exposure to, and knowledge of, the Jewish State and its history and enjoys the confidence and respect of Israel's leaders. A man of humility and openness, he has a gift for listening, showing respect and deference to all whom he meets."
In sharp contrast, as noted on the Elder of Ziyon website, last Friday's New York Times "had four articles against Donald Trump's choice to be the US ambassador to Israel.
"Yes - four articles in one day. Two 'news' articles, one editorial, and one op-ed."
As Noah Pollack reported on The Washington Free Beacon, "The NYT Is Having a Meltdown Over Trump's Israel Nominee."
Pollack writes, "David Friedman is a prominent and successful attorney in New York who has spent 20 years representing Donald Trump, among other clients. He is also a proud Jew who holds unapologetic pro-Israel views that are heretical in Times-world, and he has also expressed acid disdain for the kind of Jewish anti-Israel activism regularly glorified in the pages of the Times.
"So he must be destroyed--and to destroy him he must be lied about. Which is what the Times did."
Pollack does not specifically mention Friedman's strong support for relocating our embassy, since there are other, controversial pro-Israel positions that Friedman supports, including the building of settlements in territories under Palestinian control and skepticism about a two-state solution.
But you can be assured that a big part of the ruckus over Friedman's appointment is his affirmation that the American embassy will be moved.

That's why a headline on the Independent discussing Friedman's nomination focused on this issue alone, noting that, "Moving US embassy to Jerusalem would be 'declaration of war'."
And that's why New York Times columnist Thomas Friedman stated to Chris Cuomo on CNN that "moving the American embassy -- and this is an evergreen, everyone running for President tosses this out, no one actually does it -- moving the embassy to Jerusalem from Tel Aviv, in the absence of an agreed upon solution between Israelis and Palestinians, I would call that the 'Full Employment for Iran Act.'"
Yes, according to Friedman, it would also alienate the Sunni Arab regimes, meaning that this move would provoke the Shiite Muslims in Iran and the Sunni Muslims in countries like Egypt and Saudi Arabia. Jerusalem, the city of controversy indeed!
Thomas Friedman then reiterated to Cuomo and co-host Alisyn Camerota: "This is such madness that it's -- it's just -- I can't believe we're talking about it."
Yet Kellyanne Conway, Trump's senior adviser, has reiterated that the incoming president really does plan to make this move, calling it a "big priority" for him.
And how revealing that Thomas Friedman noted that "everyone running for President tosses this out" but "no one actually does it," whereas Trump is threatening actually to do it. This is the very reason many people voted for him: They expect him to be a doer, not just a talker.
Should President Trump succeed in relocating our embassy to Jerusalem, I predict three things: 1) all hell will break loose against him, with constant, worldwide controversy over the move); 2) God will bless our president for doing it; and 3) God will bless America for doing it.
Originally published at AskDrBrown.org - reposted with permission.