Paving The Way For The Antichrist - The Consolidation Of Power 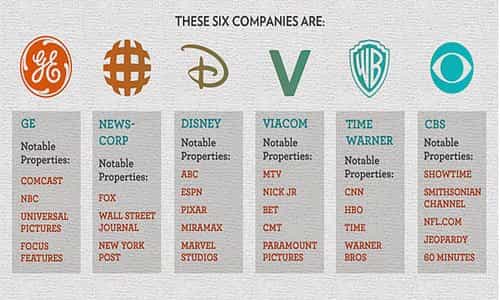 By Kade Hawkins February 01, 2016
Share this article:
Today, consolidation of power throughout society is increasing at a rapid pace. From the television shows we watch, to the news sites we visit, to the music we listen to and our financial institutions, the amount of control has passed from the many to the few.

The many different brands we use give us the illusion of choice but, more often than not, the real power is consolidated in just a few corporations or individuals.
Earlier this month Oxfam, in a complaint against tax havens, reported how that even those who hold the greatest wealth and influence in society, have regrouped into an 'ultra' elite, as a mere 62 individuals control as much money as the poorest 3.5 billion people on the entire planet.
Back in 2010, 388 members of the elite had as much wealth as the poorest half of humanity. But since then that number has been steadily falling and now it is down to just 62. At this pace, Oxfam is projecting that in just a few years a single person will have as much money as the poorest half of the global population combined.
Have you noticed your banking options are much more limited than 20 years ago?  In the last few decades 37 banks have merged to became just 4 mega-banks: Citibank, JPMorgan/Chase, Bank of America and Wells Fargo.
This same trend can be seen in the corporate media world. Thirty years ago 50 different corporations dominated what, today, we call the mainstream media. Now that control has been centralized around 6 major corporations: Time Warner, Walt Disney, Viacom, Rupert Murdochs News Corp., CBS Corporation and NBC Universal. Together, the "big six" absolutely dominate news and entertainment in the United States. If you look at any type of media outlet today, chances are they will have links to one of these companies.
It is not without significance that all these major media conglomerates are also corporate members of the Council on Foreign Relations. This organization is a US think-tank whose members have been instrumental in formulating US government policies including greater media deregulation, which is how we arrived at such media ownership concentration in the first place.
These same corporations also have significant influence over what news information is available on the Internet, it being only slightly more diverse - but that number is shrinking as well.
A new study by research outfit SimilarWeb, which compiled figures for the top news publishers covering both mobile and desktop audiences in 2015, found that the top 10 publishers -- together owning around 60 news sites -- account for 47% of total online traffic to news content.  The other half was made up primarily of another 140 web publishers.
The biggest online news publisher for the U.S. audience was MSN, owner of MSN.com, with just over 27 billion combined page views, followed by Disney Media Networks, owner of ESPN and ABC  News, with 25.9 billion.
Time Warner, owner of CNN and the Bleacher Report, had 14.8 billion, followed by Yahoo with 10.3 billion, and Time, Inc. with 10.2 billion.
A bit farther down the list were CBS Corp., owner of Cnet.com, with 9.9 billion combined page views; NBC Universal, with 9.5 billion; Matt Drudge, with 8.5 billion; and Fox Entertainment Group, owner of Fox News, with 7.9 billion.
Considering how vast the potential Internet options are for information, this is a relatively small group of publishers who dominate Americans online news consumption.
Even how one finds information online is dominated by one company: Google.  Although it's hard to nail down metrics for just how much control Google has over our Internet lives, an interesting thing happened in 2013 that might give us some insight.
The entirety of Googles services went offline for just a few minutes but, during that time, GoSquared, a real time analytics company saw a 40% drop in overall Internet traffic suggesting that 40% is a pretty safe number for Google's dominance on the Internet. That is a lot of power behind one company that can determine what you see and what you don't see, as any business fighting for position rankings on Google will tell you.
When one considers that, according to Nielsen's Total Audience Report (March, 2015), Americans aged 18 and older are spending more than 5hrs per day on the Internet or watching TV - these companies have tremendous power to shape and influence one's views on just about everything.

The Nielsen report also showed the importance radio still plays in our lives, often due to long commutes in the car.  Listening to the radio still consumes on average 2.43 hours per day of a person's time.
However, like TV and the Internet, Radio has developed a centralized power with Clear Channel, who now owns over 1200 radio stations across the United States and where 80% of the playlists are all the same.  In a nation so diverse it is frustrating to many musical artists that we all are forced to listen to the same songs over and over.
Likewise, headline news is filtered in the same way - we seem to be limited to the same top 5 news stories throughout the news cycle.  Purposely omitting certain news stories can reflect a definite bias in what is considered important to the worldview narrative which they may be trying to persuade people with.
These stats should remind us of the importance of learning to think for ourselves, to do our due diligence with any information we are consuming and also to also consider alternatives that might give us a different perspective or even simply to hear news that the mainstream media is ignoring.
Prophecy News Watch strives to be one of those alternative news sources you can trust and tries to provide news you may not be hearing about elsewhere.  We encourage you to share our site with friends and to take advantage of the video news trailer we have developed for that purpose at our new Youtube Channel.