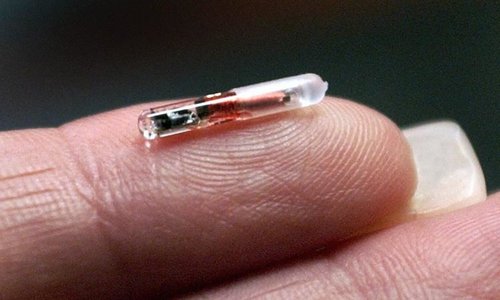 By Aaron Kesel/Activist Post July 26, 2017
Share this article:
Yes, you read that right; a Wisconsin company, Three Square Market, wants to implant a rice-sized microchip into its employees, ABC News reported.
"It's the next thing that's inevitably going to happen, and we want to be a part of it," Three Square Market Chief Executive Officer Todd Westby said.
So, according to Westby, microchipping employees is "the next thing that is inevitably going to happen."
Three Square Market designs software for break rooms that are commonly seen in office places. In other words, the markets where you get your food and check out yourself.
"We'll hit pay with a credit card, and it's asking to swipe my proximity payment now. I'll hold my hand up, just like my cell phone, and it'll pay for my product," Westby said.
Over a dozen of Three Square Market employees are getting the microchip implant paid for by the company.
The tiny chip, which uses RFID technology or Radio-Frequency Identification, can be implanted between the thumb and forefinger "within seconds," according to a statement from Three Square Market.
The report noted that the business is not requiring its employees to get the chip and that it's optional. So far 50 people are believed to have opted in to take the plunge and get the microchip implanted.
What will the chip be used for? Opening doors, the snack machine and logging into company computers and devices.
"We foresee the use of RFID technology to drive everything from making purchases in our office break room market, opening doors, use of copy machines, logging into our office computers, unlocking phones, sharing business cards, storing medical/health information, and used as payment at other RFID terminals," Westby said in a company statement.
"Eventually, this technology will become standardized allowing you to use this as your passport, public transit, all purchasing opportunities, etc."
But Three Square Market is far from the only business that feels an employee needs a slave branding to work.
Another Swedish start-up hub, Epicenter, home to over 100 business has also introduced the idea that workers require an implantation because it's convenient.

"The biggest benefit, I think, is convenience," Patrick Mesterton, co-founder and chief executive of Epicenter said.
Over the years the microchip has been teased throughout the media, from commercials about how cool it is using teens, to propaganda that it's needed to protect the children.
And finally my favorite is that it's a convenience to buy and sell at your local retailer and it's a great way for doctors to keep track of your health with immediate access to your medical records.
Meanwhile, Aaron Russo before he died in 2007 warned of the RFID implant chip. Two years later a Saudi inventor's application to patent a "killer chip," with a lethal dose of cyanide was introduced and denied in Germany.
I am not saying the two events are connected; what I am saying is that he warned us of the dangers of a chip, then two years after his death those dangers were revealed to the world.
A primary danger of getting a microchip is that human beings can be turned off just like a switch.
A microchip filled with a touch of salt of cyanide isn't your only worry, you could also have an internal electric shock or be burnt as Dr. Katherine Albrecht said.
"The way it works is it picks up and amplifies ambient electro-magnetic energy from the reader devices and if you have one of these things in your arm and you get in the range of an electromagnetic field it can actually burn you,"Albrecht said.
Then there is the fact that the chip might be cancerous according to Dr. Albrecht.
Finally, with privacy violations by the NSA and GCHQ spying and hacking technology, it's hard to imagine what rational person would want a RFID inside their body.
Interestingly enough, Wall St. just tested digital cash in a secret meeting last year - another area which Russo said earlier is the plan, digital cash with a microchip.
"The end goal is to get everybody chipped, to control the whole society, to have the bankers and the elite people control the world," Russo said.
Originally published at Activist Post - reposted with permission.