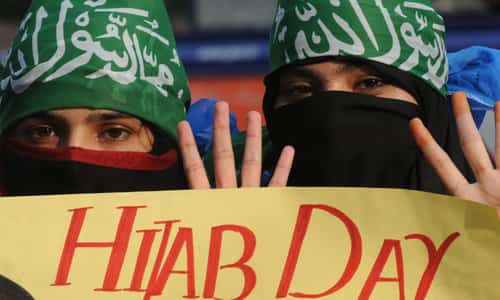 By Shabnam Assadollahi/Gatestone Institute Feb 23, 2016
Share this article:
This Thursday, February 25, 2016, the city of Ottawa will be holding a public event celebrating the hijab, Islam's physical repression of women.

The City for All Women Initiative (CAWI) organization, backed by the City Council of Ottawa, is hosting the Ottawa Hijab Solidarity Day celebration, also called "Walking with Our Muslims Sisters," at City Hall. According to CAWI, the main purpose of this event is to encourage non-Muslim women to wear a hijab to understand life as a Muslim woman.
(Editors note - If they want to understand life as a woman under Islam go to one of the refugee camps in Europe - headline from Breitbart this morning "100 Riot In Migrant Reception Centre, Triggered By Womans Refusal To Wear A Head Scarf" - 11 people were arrested yesterday following a riot involving Syrians, Afghans and Iraqis which broke out over a dispute involving a Syrian woman refusing to wear a head scarf.
Belgium Secretary of State for Asylum, Migration and Administrative Simplification, Theo Francken, has spoken out about the riot, saying:
"I find it totally unacceptable that some young Afghans find it necessary to tell Syrian girls to wear a headscarf and that they should not dress like western girls.
"They come here, they are guests here. We are not theirs. They have to adapt to our rules.")
The outrage is that such an event will be taking place under the auspices of the City of Ottawa, the capital of Canada. Under Islamic Shari'a law, the hijab is an expression of the suppression of women and is used as a tool to persecute women by their male counterparts.
For many secular and former Muslim women, the hijab is anything but a symbol of freedom. The hijab serves as a physical daily reminder that they, women, are second-class citizens in the eyes of Islam.
Proponents of the hijab threw me into an Iranian prison for 18 months when I was 16, for protesting Islamic extremism. My family and I were forced to flee; we finally found refuge in Canada.
I have since worked to expose the truth about the Shari'a-guided regime of Iran, as well as advocating for the emancipation of minorities and women.
While critics of CAWI's event, including myself, have been wrongfully characterized as "Islamophobes," this could not be further from the truth. A woman in Canada has the right to wear what she chooses -- but why celebrate the hijab, any more than the crucifix or a skullcap? It is not the place of government to do that.
In Iran, where I was born, women are slowly beginning to stand up against the regime's Shari'a-minded repression. One group, My Stealthy Freedom, describes itself as "an online social movement where Iranian women share photos of themselves without wearing the hijab."
The fact that Muslim women in Iran go to such dangerous lengths, risking arrest and even death, to take a stand against their own religion's oppression is in itself a significant act.
Forcing women to wear a hijab is not unique to Iran. In Afghanistan and some parts of Saudi Arabia, women face beatings, fines and even worse outcomes for showing their hair. In 2002, in Saudi Arabia, "religious police stopped schoolgirls from leaving a blazing building because they were not wearing correct Islamic dress... the headscarves and abayas (black robes) required by the kingdom's strict interpretation of Islam." Fifteen girls died in the fire and more than 50 others were injured.
In a practice inaugurated by Muslims, purdah, women are shut away from society, literally imprisoned by their own families.
While one may assume that the persecution of Muslim women by Muslims does not take place within Canada's borders, facts state otherwise. In 2007, Aqsa Parvez, a 16-year-old Pakistani Muslim living in Toronto, was strangled to death by her father. Her crime was that, as a free woman in Canada, she chose not to wear a hijab.

In another case in Canada, in 2012, Afghan-born Mohammad Shafia, his wife and their son were found guilty for the honor killing of the Shafia's three daughters - Zainab, 19, Sahar, 17, and Geeti, 13 -- as well as Mohammad's second wife, Rona Mohammad Amir, 50. All four women were murdered by their own family for refusing to wear a hijab and preferring Western clothing.
The government's acceptance of an Ottawa Hijab Day amounts to accepting a radical legal system that is completely contrary to Canada's democratic values, and crosses the line that separates Church and State. Endorsing the wearing of the hijab is endorsing the first step of an extremist ideology that leads to and condones honor killings, female genital mutilation (FGM) and the oppression of women.
When this author wrote an open letter written to Ottawa Mayor Jim Watson, by way of response, his spokesman told the Ottawa Sun that the mayor will not intervene "in this difference of opinion between this individual and the event organizers" since the event "conforms with relevant policies... It is not my role to tell people what they should wear." And it is not the role of a democratic government to celebrate religious symbols or to help religions proselytize.
Perhaps the Ottawa government would like to hold celebrations for "Ottawa Crucifix Solidarity Day," "Ottawa Kippah Day" and "Ottawa Parsi Turban Day"?
The City of Ottawa, the capital of Canada seriously needs to reconsider its support for CAWI's event.
Originally published by Gatestone Institutute.  Reposted with permission.