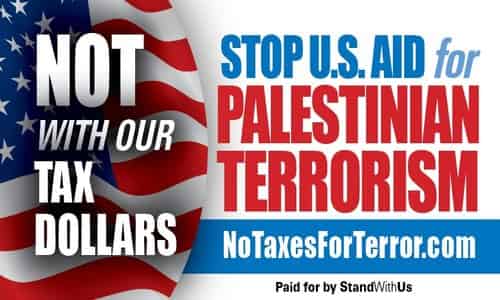 The US and others, while suggesting they are strong supporters of Israel and its need for security, in reality are not promoting peace. Their policies are actually sustaining and rewarding terror.

President Obama, for example, has repeatedly stated throughout his administration that America's commitment to Israel's security is "unshakable". No doubt these are reassuring words to Israel and its friends around the world. However,  his actions contradict his words.

However, in order to see the folly of blaming the lack of peace on these issues, we should look at what the statements imply:

The Arabs flatly refuse to accept the right of Israel to exist. The charters of the PLO, Hamas and Mahmoud Abbas's own party Fatah, all require its destruction. Is the US devoting anywhere near as much attention to combating this as they are about condemning settlements? Absolutely not.  Abbas has repeatedly stated he will never recognize Israel as a Jewish state.  Israeli leadership has consistently committed to recognizing a state for the so-called 'Palestinians', yet is the US applying equal pressure on him to recognize Israel? Again, no.

Another issue is money.

The US and others believe if there is measurable improvement in the overall economic environment of the Arabs it would reduce their "frustration", which many believe motivates their terror attacks against Israelis. For the uninformed Arab, terror against Jews has been ongoing since the rebirth of Israel in 1948. Moreover, such statements carry with them an implied justification for the terror and provide additional incentive for more of them. In my view, there exists no moral equivalence between justice and terror.

Moreover, after Israel is forced for the umpteenth time to neutralize murderers of innocent civilians, we hear the ever-present catcalls that they are using disproportionate force. My response to this is something I heard years ago- "if the response to terrorism is seen as less acceptable than terrorism itself, we invite more of it."

If the Arabs wish to express frustration regarding their poor economic condition, I say they have that right. However, they should be expressing it at the appropriate party, and that is not Israel.

The responsibility of the economic plight of the Arabs belongs to their own leadership.

When Yasser Arafat formed the Palestinian Authority in 1994, he promised new hospitals, clinics, educational institutions and improvements to the general infrastructure. He also promised greater employment opportunities. However, instead of delivering on his promises, he took complete control of all media, as well as the flow of money. None of the promised improvements took place. With virtually no independent oversight this became a recipe for corruption.

He and his cronies systematically stole huge sums of money, while the average Arab remained in abject poverty, which is the case today.

Such information rarely gets much attention, and certainly not in Arab media, heaven forbid!

Here are some rather incredible facts:

Since its formation, the Palestinian Authority has received over $31 billion in foreign aid. In 2014 alone they received well over $2 billion. Of that amount the US provides the most by far- roughly $400 million, followed by the European Commission ($140 million), Saudi Arabia ($103 million), the UK ($95 million), etc. [see chart]

In fact the Arabs have received more money than any other group of people in human history. If you take into account historic inflation, the PA has received more money than the US gave to rebuild all of Europe under the Marshall Plan after WW ll, according to Calev Myers of the Jerusalem Institute of Justice who has studied this extensively. The funds were given to 17 countries with a combined population of 300,000,000. By comparison the number of Arabs living in Judea/Samaria, commonly referred to as the West Bank, is just under 3 million, or equal to 1% of post WWll European population. Yet they have been given more money than all of Europe!

With respect to Arafat, while the average Arab suffered, his wife Suha who lived in Paris received $200,000 per month from him. She also is alleged to have received numerous bulk payments, one of which was $11 million according to reports.  Where did this money come from? More important, what happened with the vast amount of international aid given to the PA?

When Arafat died in 2004 an investigation showed he had $1 billion stashed away in Swiss bank accounts. Plus, he supposedly was in control of up to $6 billion in assets.  His widow refused to reveal the location of the stolen money unless she was awarded a 'finders fee.' Rumor is the investigative team paid her as much as $40 million. The team was led by Mahmoud Abbas.

Since then, Abbas has traveled down the same road of corruption of his predecessor. His personal wealth is said to be as much as $1 billion. However, since he is not subject to financial accountability, who really knows? He is currently constructing a $13 million mansion for himself.

Another area of fiscal irresponsibility is the PA owes roughly $300  400 million to Israel in unpaid electricity bills. Given Mr. Abbass accumulated stolen wealth, no doubt he could write a personal check for the entire amount.

In reality the economic well-being of the Arabs has long been in their own hands. However, they have never been able to realize it because their leadership has literally stolen it. Meanwhile, western leaders bemoan the presumed poverty driven frustration as the reason for terror, while international money keeps lining the pockets of corrupt leadership, and the average Arab continues to live in poverty.

Someone needs to have a blunt conversation with Mahmoud Abbas.

As for the Arab health care system, it remains so under developed many of them in desperation come to Israel for needed care. Indeed, in 2014 when tensions were extremely high due to the disappearance of three Jewish teens, who were later found murdered, Abbass wife was having surgery in an Israeli hospital. Plus, in the midst of the current spate of terror, which Abbas has fueled with hateful rhetoric, his brother-in-law had life-saving surgery in Israel. Israel even treated the granddaughter of Ismael Haniyeh, Hamass leader in the Gaza Strip.

Aside from pilfering money meant to improve the lot of the average Arab, there is another disturbing aspect of how international aid is being used by the PA.

Approximately 16% of their total budget is designated to reward terrorists and their families. This is done under what is called The Law of the Prisoner.

If an Arab commits a crime against an Israeli and is imprisoned he becomes eligible to earn a large monthly income. It can be as much as $3,500, ($42,000 annually) which is five times greater than the average Arab earns. The monthly income is on a sliding scale. The most heinous crimes get the highest monthly stipend.

You've heard the old saying "crime doesn't pay?" These terrorists are proof it does pay. US and European taxpayers are the ones who are providing the "pay."

Abbass actions are nothing short of criminal, plus he is guilty of using international humanitarian aid to reward murderers.

While the likelihood of him being imprisoned is remote, here are few suggestions for the US and others:

At the end of the day the effort of the US to appear balanced by maintaining the status quo is not only failing to move the peace process forward, it is actually perpetuating an environment which will never produce peace.

What is needed is for world leaders, especially the US, is to get blunt with Abbas as well as the Arabs, and stop trying to persuade Israel to further compromise its security by rewarding those who uncompromisingly seek its destruction with land and money.

Dan Calic is a writer, history student and speaker. See additional articles on his Facebook page.